Are you the victim of Rules for Radicals?

What the left is doing right, and what the right is left to do about it. 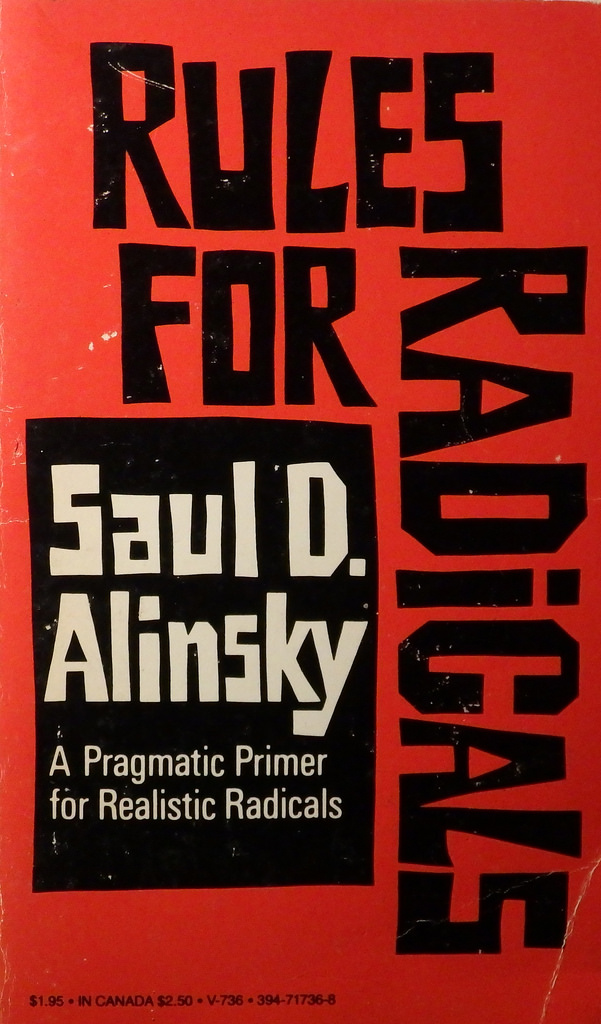 adicals is a book written by community organizer, Saul Alinsky[i], to mobilize and radicalize people in an effort to undermine, reshape, and transform communities, states, and the United States of America.  Alinsky’s tactics have traditionally been embraced by the left.[ii]  His philosophy is believed to spring from his close association with socialism and the teachings of communist, Karl Marx (though he denies any formal association[iii].)

Alinsky’s acclaimed book was the subject of the senior college thesis of Hillary Rodham Clinton in which she attempted to elevate and compare his agenda to the writings of Walt Whitman and Martin Luther King.[iv]  Liberals have used his “rules” for years.  It is past time for the right to learn these tactics so they may recognize what is in play and how to respond.  This was first suggested to the tea parties by Dick Armey through his organization, FreedomWorks.[v]  There is still time for the right to use some of these “rules” for good and liberty.  (As you learn to recognize the tactics, you will see establishment Republicans (perhaps unknowingly) are using these tactics to beat back conservatives, platform Republicans, tea party activists, and anyone who questions their performance.)

Recent uses of the rules include making free speech dangerous as we have seen on college campuses. When conservative speakers are scheduled, the left shuts them down with the use of violence and intimidation with the idea that free speech is somehow dangerous.  We also see the rules used when the left (and even some on the right) continually politicizes everything possible.

The cumulative effect of these rules is to ultimately win a war by attrition through forcing the average person to give up or tune out due to hopelessness or fear of retribution.

The left is obviously determined to drive good, decent, hardworking people to withdraw from the political arena leaving a vacuum of leadership to be filled by those wanting to bring down the country and replace it with a new socialist/communist agenda.

The ONLY WAY to prevent the continued erosion of economic freedom and individual liberty is to not give up but instead speak out and take action. The other side wants you to believe you can do nothing about the situation. Those who prosper from government status quo want you to think that giving Arkansas Republicans supermajorities in the legislature and the governor’s office without change means there is no changing the status quo.  But that is when they win – when good people and defenders of liberty give up and leave the battle.  Freedom requires constantly paying the price to keep it…it is not free…we must continue to fight for the soul of America.

Succinctly put the “rules” for radicals are as follows:

Although initially written for a socialist/communist agenda, some of these tactics could be used for the fight for liberty and freedom.  Consider Rule 8. People can use this idea to keep their elected officials accountable by being informed of their voting records.  Rule 12 could be used to attack the Arkansas government spending problem by offering the solution of a cap on the growth in government spending from year to year.  Rule 4 could be leveraged with FOIA requests to know the details and goings on within your local government, keeping them transparent and accountable.

Never be caught unaware of these tactics used by politicians in general. They are effective in silencing and demoralizing opposition. Most on the more conservative side, or even classic liberal side, are reluctant to engage in these tactics.  But the rules have none-the-less been effective in diminishing truth and honest discussion.

It may well be time for the good people to make use of, or at the very least be aware of, these tactics used to take advantage of our collective human weaknesses.  Remember what we are protecting here, American exceptionalism in its many beautiful forms.