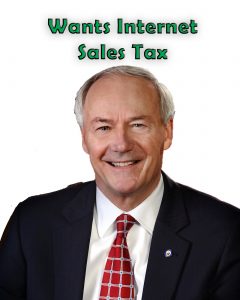 Governor Asa Hutchinson wants to impose an Internet Sales Tax on your online purchases from out-of-state stores. He didn’t get it passed before the legislature recessed, but he is calling for a special session to begin May 1 and the tax is a likely item.

The Internet Sales Tax (SB 140) only fell eight votes short of passage in the Arkansas House of Representatives. He needed 51 votes but the bill only received 43 “yes” votes. There were 50 “no” votes and 7 Representatives did not vote. The bill had already passed the Arkansas Senate.

Pressure was already heavy during the Regular Session. Representative Scott Baltz (D) said his bill to appropriate state funds to protect your school children with a panic button system was vetoed by the Governor, since Baltz had not supported the Internet sales tax.

What can you do? Tell your State Senator and State Representative what you think about the state collecting more tax money from you.

There are many ways to contact your legislators: visit in person, make a phone call, send an email, or even send snail mail. Several legislators may also be contacted through Facebook or Twitter.

It only takes a few minutes to let your voice be heard!

Has your Senator and Representative already supported the Governor’s Internet Sales Tax? See how your legislators voted on SB140:

Time is running out for you to stop passage of the Internet Sales Tax.