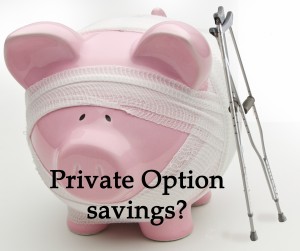 Obamacare supporters claim by continuing Arkansas’ massive government entitlement program the Private Option, Arkansas will save $438 million during the years 2017 through 2021. Yes friends expanding government is supposed to save (not cost) money.

The claim of savings comes from a report by the consulting firm, The Stephen Group. The report says during the period of 2017-2021 the state will have expenses of $670 million ($656 in federal match, plus $14 million in administrative costs). Then the report cites factors that are claimed to save Arkansas more than $1.1 Billion over the same period and result in Arkansas getting to pocket a profit of $438 million.

The media and politicians accepted this number without question. If the claim were true, Arkansas government would be receiving $1.65 for every dollar the state spends. You know the old adage, “If it sounds too good to be true, it probably is.”

I think the numbers actually are “too good to be true.” Instead of saving the state money, I think the numbers still show Arkansas having to pay hundreds of millions of dollars at a time when the state budget is already under significant stress and various groups want to raise taxes.

Why is the report so overly optimistic?  Consider this:

The claim of a saving has been seen by some as an opportunity for Republican supporters of the Obamacare program to justify supporting it. Without the alleged savings their votes on this optional Obamacare program come down to whether they like the big government policy or not. The Private Option provides insurance to the Obamacare Medicaid expansion population, which is overwhelmingly able bodied working age adults (40%-46% not working) with no dependents, meanwhile some disabled persons are put on waiting lists for assistance.

Overview of the claim of savings

Let’s look at the Stephen Group’s chart claiming a saving to the state from the expansion of government through continuation of the Private Option (Obamacare Medicaid Expansion). Then we can discuss the many problems with the numbers. 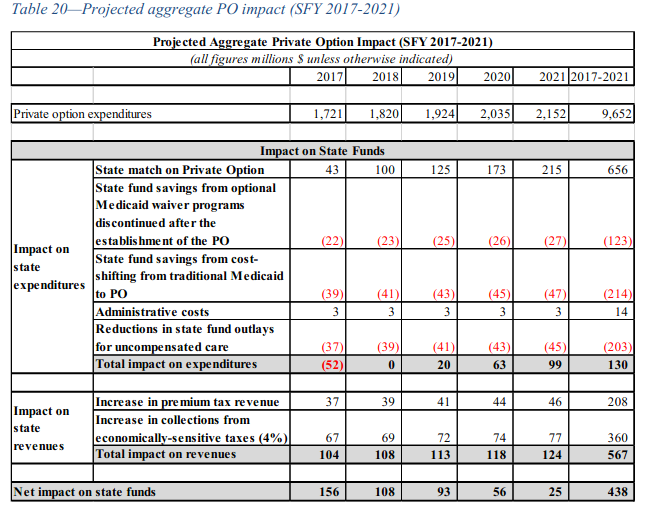 The first thing you need to know about the projection of savings in the Stephen Group report is the contract directed the consultants to prepare a report supporting Obamacare Medicaid Expansion. Here is what the Stephen Group said about its contract with the Health Reform Legislative Task Force:

TSG’s [The Stephen Group] contracted responsibility calls for recommendations to improve the quality and efficiency of the traditional Medicaid program while offering a solution for the future of the Private Option, while maintaining coverage for the nearly 250,000 participants in the program. [i](Emphasis Added)

“Program” as used above means Obamacare Medicaid Expansion (which in Arkansas is currently called the “Private Option.”)

Results skewed by limiting which years are examined

Even if you were to accept the Stephen Group estimates (which I do not), you can readily see the alleged savings drops dramatically from $156 million in 2017 to $25 million in 2021. By focusing on a five year period starting in 2017 when the state contribution is 5%, the report only includes one year when the state contribution is 10%.  By cutting the table off once you reach the more costly years you skew the results to make it appear more favorable.

As you will see below there are problems with even the projection of a saving of $25 million in 2021.

Factors used in the alleged savings?

Eighty three percent of the savings claimed can be attributed to: “Increase in collections from economically-sensitive taxes (4%).”   Sounds important but do you know what this means? It means that by spending lots of federal and state tax money on the Private Option, the program will stimulate the economy and bring in additional tax money for Arkansas – taxes such as the income tax, sales tax, etc.

In essence the argument is: GROWING GOVERNMENT AND GROWING GOVERNMENT INVOLVEMENT IN YOUR LIFE IS THE WAY TO PROSPERITY. It is surprising to hear this argument being made when Arkansas’ state government has a Republican majority.  The argument sounds more like one you might expect liberals to make.

Even if you accepted the liberal ideas that bigger government means prosperity and that entitlements can be treated as if they were an economic stimulus package, the 4% model is just a generic number based on Arkansas general revenues and does not reflect the health care and insurance industries. It certainly does not take into consideration that hospitals are largely tax exempt, or that hospitals and insurance companies might choose to use the extra taxpayer money to shift profits to operations in other states.

The claimed $360 million saving through “Increase in collections from economically-sensitive taxes (4%).” is little more than liberal big government wishful thinking.

So what was the state spending? I did not find any appropriations of general revenue for uncompensated care.  All I found was a few appropriations of General Improvement Funds (GIF) for Community Mental Health Centers.

GIF is one time grant money that is classified as surplus and GIF expenditures depend on how much surplus is available.  GIF is normally appropriated once in each two-year cycle.  There are the appropriations found:

Based on the appropriation acts I found, I can only assume the projection of uncompensated care spending has been inflated by 4 to 6 times and is based on General Improvement Fund appropriations which are surplus money and not part of a regular budget.

NOTE: When a medical provider refers to “uncompensated care” it doesn’t mean they spent that amount of money. It is a pie-in-the-sky number for desired profits. For hospitals only a small percentage of the claims of uncompensated care have anything to do with charity care for the poor. [iii]

The report claims the Private Option will save the state $123 million because Arkansas no longer has some optional Medicaid waiver programs that were discontinued under Obamacare.  It is my understanding those wavier programs do not come back even if Arkansas no longer participates in Obamacare Medicaid Expansion. If the programs would not come back, you can’t count them as Private Option savings.  Therefore, it appears this savings claim would instead be zero.

The report claims the Private Option will generate $208 million in state revenue from increased insurance premium tax revenue. This item actually reduces Arkansas’ overall cost, but Private Option supporters may wish this scheme had not been included in the list.

Before you say “Yee Haw! We pulled one over on that dad-blamed federal government,” remember you are also a federal taxpayer and it still comes out of your pocket whether as state taxes or federal taxes.

Will the federal government allow this scheme to continue to put money in Arkansas’ pocket while causing higher overall program costs? This is a serious issue. Without this scheme, the concept of running the Obamacare Medicaid Expansion program through insurance companies crumbles.

The federal Centers for Medicare and Medicaid Services (CMS) has not been vigilant in making states pay their share, however the federal Government Accounting Office (GAO) has already shown it will be vigilant concerning CMS overspending.  How about some dedicated public official asking the GAO if it is allowable for Arkansas to cause a higher program cost, nearly all of which must be paid by the federal government, in order to reduce the state’s effective match.

The attempts to put a conservative spin on the Obamacare Medicaid Expansion program (adopted by congress with only Democrat votes) just haven’t worked.