Governor Asa Hutchinson called a special session of the legislature to begin today Monday May 1. One item for the session is a bill to prohibit Arkansas from creating a state-based Obamacare Exchange for individuals.

Conduit for Action opposes an Arkansas-based Obamacare Exchange BUT this bill doesn’t ring true. Is it a ploy to make the uninformed think the Governor is tough on Obamacare?  Is it a backhanded way to tell the feds Arkansas wants to keep spending federal money for development of an exchange (for businesses)? Will there be something else in the bill?

To explain why we are so skeptical we first need to explain why this item puts the spotlight on a big lie by Senator Jim Hendren.

THE 2015 LIE – PROHIBITING AN ARKANSAS BASED OBAMACARE EXCHANGE 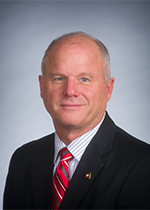 Creation of an Arkansas-based Obamacare Exchange would not be an issue in the special session but for Senator Jim Hendren deceiving the public in 2015.

Senator Jim Hendren is supposed to be a Republican leader.  He is chair of the Senate Republican Caucus. In addition, he is a leader in our military. One would hope you could trust a person in such positions of leadership. This has not been the case. His 2015 bill saying it was prohibiting a state-based Obamacare is just one sad example.

To understand Hendren’s big LIE on the subject, there are a few terms we need to explain.

“Obamacare exchange” is the place where government subsidized insurance is bought. This is not the official name of the health insurance exchange.

“State-based Obamacare Exchange” states have the option to allow their citizens to purchase Obamacare insurance from the federal health insurance exchange or create their own state exchange. Under a state exchange the state takes the risks and gets any rewards.  Creating a state-based exchange has been so unpopular only a few states created one and some of those states have already abolished theirs.

“Shell bill” this is legislation filed in Arkansas that does not have the details filled until a later amendment. A shell bill is just a place holder.  Shell bills have a title and a body that is only normally one sentence saying the purpose of the bill is … whatever the title said.  There is no good reason to file a shell bill unless you still haven’t figured out what you want in your bill on the last day of filing..

QUESTION -If Hendren’s bill became law, why is his uncle, Governor Hutchinson, now proposing a bill to prohibit a state-based Obamacare Exchange for individuals.
ANSWER – Hendren amended his shell bill to make the title of his bill a LIE.

His amended bill was crafted to PRESERVE THE OPTION for a state-based Obamacare Exchange, not PROHIBIT one. Hendren’s bill never took away the authorization to create an Arkansas-based Obamacare exchange, and the Arkansas agency created to work on an exchange never stopped spending money and working toward that goal. The bill continued the authorization UNLESS the US Supreme Court ruled against an Obamacare tax break for insurance bought from a federal exchange. Had the tax break been stricken by the court, many thought it would be the end of Obamacare.  The bill was drafted to keep the authorization unless Obamacare itself crumbled. But, he dressed up his bill in a false title.

Using the false title it accomplished one thing – it drew attention away from a bill by Representative Mary Bentley to actually repeal authorization for an Arkansas-based Obamacare Exchange.

Here are links to his original shell bill and his amended bill.

Because of Hendren’s 2015 lie, here we are again talking about the same issue.  But does this this new proposal do anything?

WILL THE NEW LEGISLATION STOP ANYTHING THAT COULDN’T BE STOP ANYWAY?

We haven’t seen the draft, but legislation to prohibit a state-based Obamacare Exchange would only be necessary if the Governor saw a danger that the Arkansas Health Insurance Marketplace Board would create one against his wishes. History shows that the Board has bowed to the wishes of the Governor.

In addition, the Governor and legislature have control over the board. The Governor, the President Pro Tempore of the Senate, and the Speaker of the House of Representatives (all members of the same political party) each appoint three (3) members to the Marketplace board. Plus, the Governor has the remaining two members as his employees (DHS Director and Insurance Commissioner).

This leaves us wondering why is this an issue for the special session:

MORE ON WHY WE ARE SKEPTICAL

We are skeptical of this bill for two reasons: 1. It doesn’t appear necessary, and 2. Arkansas has a track record of using deception to further Obamacare. Here are some examples of Arkansas’ deceptive record on Obamacare:

In other words – Fool me once shame on you.  Fool be twice shame on me.  Fool me over and over again….