We can’t do anything. Oh yeah?

The transfer of $1 million by the Arkansas Department of Transportation to the University of Arkansas to help fund a building for the UA’s civil engineering program has drawn heat.  The transfer comes at a time when motorists are complaining about potholes.  It also comes at a time when the department and the Highway Commission are claiming more tax money is needed in order to do their job.  As Conduit For Action said. that’s incredibly bad timing. 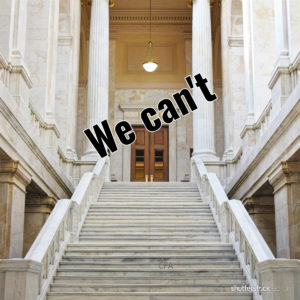 Looking at Facebook posts about the transfer two things are evident: First, a lot of people are hot under the collar about their highway funds being spent for a college building. Second, some people assume the legislature has no power to rein in the department because it is independent since it is under the Highway Commission created by Amendment 42 to the Arkansas Constitution.

I worked for the legislature too long to let that statement go by unchallenged. The legislature has a greater ability to curb the Transportation Department than some believe.

I bet some creative legislators could come up with even more ways to rein in the department, if that was the will of the legislature.

It is not just the legislature that has power to rein in the Arkansas Department of Transportation.  The Governor has appointed several of the members of the Highway Commission.  In addition, the Governor has transferred millions of dollars to the department from his discretionary funds.  Before the Governor agrees to make future transfers, he could make it contingent on the department agreeing not to transfer the money or any taxpayer money to any other state institution or agency.

The issue is not whether the legislature or Governor are powerless to rein in the Department of Transportation.  The issue is whether they want to restrict the department.

You would think that before transferring $1 million to the U of A, the department would have solicited input from legislative leaders and the Governor.  If the department failed to do so, then it is one more reason to change the highway laws and constitution.