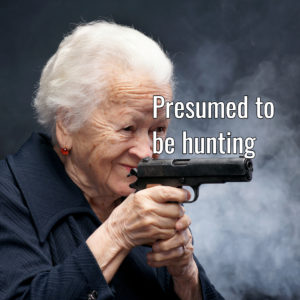 Complaints are boiling over among some gun owners concerning the Arkansas Game and Fish Commission clamping down on carrying loaded handguns in game management areas, but more significantly concerning AGFC regulations that ignore Act 746 of 2013, which affirmed your right to carry a handgun.

I haven’t been carrying a handgun, but my interest in the subject was piqued when someone posted AGFC regulations on the Facebook group Patriots of Act 746 and I read the regulations for myself. The regulations are quoted below for you to see too.

While I would hope there would be few, if any, situations in which a wildlife officer would be tempted to use the regulations to penalize a person based solely on the person exercising his or her right to carry a handgun, the regulations are written so broadly as to have a chilling effect on lawful conduct under Act 746. It is understandable that Second Amendment advocates would be concerned by the AGFC’s failure to modify the regulations to factor in Act 746, especially since it has been four years since the passage of Act 746.

For the purpose of this discussion, I will look at what the regulations “say” as opposed to how I would hope the regulations would be enforced.  As written, the AGFC regulations are overly broad and need revision, at least to acknowledge Act 746.

If you are a gun control advocate, you may like the uncertainty the regulations cause.

Act 746 affirmed your Second Amendment right to carry a handgun or have one with you in your vehicle by revising the offence of “carrying a weapon.” Under Act 746 the offense doesn’t apply UNLESS the government can prove you were carrying with the intent to UNLAWFULLY use it against another person. (Read Act 746)

01.00-F PRIMA FACIE EVIDENCE
The possession of any tackle, killing device, harvested wildlife or portions thereof in fields, forests, along streams or in any location known to be game cover, shall create a rebuttable presumption and shall be considered along with other evidence as prima facie evidence that the possessor is or has been hunting or fishing.

01.00-G BURDEN OF PROOF FOR VIOLATION EXCEPTIONS
In connection with any action alleging a violation of a Commission regulation, any person claiming the benefit of any exception or permit under this Code shall have the burden of proving that the exception or permit is applicable and was valid and in force at the time of the alleged violation.

Under the regulations the mere act of lawfully carrying a handgun gives rise to the rebuttable presumption that you are or have been hunting.  You have the burden to prove you weren’t hunting.

You may be carrying a handgun or have one with you in your vehicle for self-protection but under the presumption you could be charged with hunting illegally, unless you have the proper hunting license, are carrying the handgun at a permissible time for hunting, have the right kind of handgun if allowed for the hunting season, etc. If you can’t overcome the presumption you haven’t been hunting, you could face a fine, imprisonment, and loss of hunting privileges (assuming you are a hunter).  Plus, you have the expense of defending yourself in court.

The Arkansas Game and Fish Commission is an independent state agency created under Amendment 35 to the Arkansas Constitution.  Will Game and Fish really try to say it’s regulations are superior to Act 746, which is a general law not a hunting law? Or, has the commission just been avoiding a difficult task?

A CLOSER LOOK AT THE REGULATIONS

Burden of proof: Stopping poachers is an important function.  As a land owner I appreciate the commission watching for poachers. The AGFC regulation is a tool to catch poachers, but the problem is the regulation is so broad it can ensnare people who are lawfully carrying a handgun for self-protection or who are otherwise lawfully carrying the handgun and not hunting.

It could be argued the task of catching poachers would be much harder if the gun owner didn’t have the burden of proving he or she was not and had not been hunting. Yet, the same argument could be used for a violation of any law.

Applies nearly everywhere: The regulations are written so broadly they apply even if you are nowhere near the woods. As written, the AGFC regulations can apply even in urban areas. Regulation 01.00-F says it applies if you are carrying a firearm in: (1) a field, (2) a forest, (3) along a stream, or (4) in any location known to be game cover. Even in the city of Little Rock deer roam through some neighborhoods, which would be a “location known to be game cover.” And, it is not just deer.  What about squirrels or rabbits in the city?  It is farfetched to think wildlife officers would try to penalize you for carrying a handgun in a city.  Yet, that possibility under the regulation demonstrates how overly broad the regulation is written.

Reasonable enforcement. It could be reasonably contended that wildlife officers will enforce the regulations in a reasonable manner and are not looking to bother people who are not hunting. The integrity of wildlife officers is not at issue. The issue is the overly broad regulation itself.  You should not have to worry about even a remote possibility of being charged with hunting illegally just for carrying a handgun legally under Act 746.

Short barreled handguns. There has been some discussion on social media that perhaps AGFC wildlife officers would not declare you to be hunting unless the barrel of your handgun is four inches long or longer. The idea is a barrel of at least four inches is needed for hunting.

Act 746 says nothing about barrel length.  It recognizes your right to carry a handgun regardless of what the handgun looks like.

Concealed Carry License.  There has also been discussion that perhaps a concealed carry license (and a barrel shorter than four inches) will keep you on the good side of the AGFC.

Act 746 is not based on whether you have or don’t have a concealed carry license.

Any Firearm. In reviewing the broadly written regulations, it is evident the regulations presume the carrying of ANY firearm is hunting.  As written, in the following examples you are PRESUMED to be hunting UNLESS you can prove you were not.

Possessing a firearm in all these examples runs at least some risk of you having to prove you weren’t hunting to a wildlife officer and if that doesn’t work, to a court. Again, I am not writing about how wildlife officers are likely to enforce the regulations, and instead am looking at what the regulations say.

Handgun Owners and the AGFC

Are Act 746 supporters just being paranoid worrying about Arkansas Game and Fish regulations?  I don’t think so.  These are not poachers and they are diligent in learning their rights. In trying to learn about their rights they have encountered a badly written and overly broad regulation.

Are AGFC commissioners out to infringe your rights? I don’t think so. It seems to me they inherited very poorly written regulations and have been reluctant to take on the significant task of conforming their regulations to Act 746.

What Do You Think?

I think the regulations need to be rewritten to acknowledge Act 746 and to more narrowly describe the conduct that should be penalized – poaching. These are my thoughts. What are your thoughts on the regulations? Do you agree, disagree, or have additional concerns about the regulations?

Here is a link to Act 746. The AGFC regulations are quoted above. Read both and make up your own mind. Also, consider the Second Amendment which says: “A well regulated Militia, being necessary to the security of a free State, the right of the people to keep and bear Arms, shall not be infringed.”