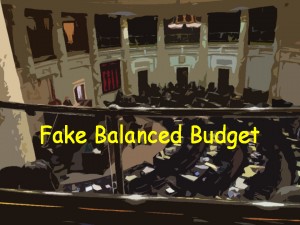 Recently Conduit for Action called for the live streaming on the internet of meetings of the powerful Joint Budget Committee and its subcommittees. [Read Here] The following article not only focuses Arkansas’ fake balanced budget, it also gives you an example why videoing these meetings is so important.

Arkansas has a balanced budget.  Right?  It does if you don’t count the fact that Arkansas has not been paying all its bills.

Before discussing “shell game budgeting”, you may need some basic understanding of budget lingo:

In the 2013 Regular Session $9.4 million was allocated in the upcoming budget to pay county jail reimbursement.  By the 2014 Fiscal Session (January ‘14) leaders knew that this was not enough money for the remainder of the FY 2013-14 (ending June ‘14.)  So $4.2 million was added from the state surplus ($500,000 to the Department of Community Correction + $3.7 million to the Department of Corrections).  Although $7.4 million had been requested just for the Department of Correction, this request was cut in half.[i]  Was this an intentional move to shift another $3.7 million or a part of that amount of the state’s debt into the 2014-15 Fiscal Year by the 89th General Assembly?

Despite these same legislators knowing that $9.4 million had not been anywhere near enough to pay the state’s debt to counties in the 2013-14 fiscal year, no additional funds were put in Category “A” for the 2014-15 fiscal year.  To the uninformed observer it looked like the state was addressing the problem because an additional $7 million was added to Category “B” funding.  Was this just a head fake, knowing that Category “B” would not be funded?

Perhaps there was a sudden economic downturn in 2014 that caused County Jail Reimbursement not to receive Category “B’ funding?  No. Category “B” funding was just a pipe dream. When the Corrections Board announced in September 2014 that that there would be few if any reimbursement payments for the next ten months, state revenue had been near, or perhaps a little above, the state forecast.  July revenues were reported to be lower than forecast by the state, but the shortfall was only 1.9%.  Richard Weiss, the Director of the Department of Finance and Administration, declared the drop was not a cause for concern.[ii]  By August the revenue report showed that Weiss was right as the state’s revenue was higher than the same month in 2013 and was ahead of the state forecast.[iii]

So, only two days after newspapers reported the good revenue numbers and only two months into the fiscal year, the Corrections Board announced to counties to expect few if any reimbursements for the remaining 10 months of the fiscal year.

It seems that the state keeps getting behind in providing enough funding for prison employee holiday pay and overtime.  Great way to say we value you as employees!

For example, in the 2014 Fiscal Session $10 million in surplus funds were requested to catch up on what was owed to prison employees.  Only $5 million was approved.  (Wonder what the US Department of Labor and the Arkansas Department of Labor would think about a private employer putting holiday and overtime payments on hold?[iv])

Budget Priorities Out of Whack!

Were other projects pushed ahead of paying Arkansas’s just debts?  There is no doubt.  A long list of millions of dollars that were spent on good but optional programs funded by general revenues could be given here.  In addition, a long list of millions of dollars spent on local projects from General Improvement Funds (GIF) could also be added.  But, this is not about what projects are more worthy than others.  It is simply about the embarrassment of failing to provide enough funds to pay the state’s debts while optional “new” programs received funding.  Not paying just debts should never be used as a way to fund other priorities.

Consequences of the fake balanced budget

Pass a real balanced budget: To have a budget that is a real balanced budget, first the state must take a realistic look at its debts before dividing its revenue among programs.  When you ask a bureaucrat[v] about unfunded liabilities you will probably be told “Arkansas doesn’t have any unfunded liabilities”; but county jail reimbursement and prison employee pay show otherwise. Second, the state’s budget must prioritize the funding of its debts ahead of good but discretionary projects.  Why would debts ever be put in less than the top funding category?

Will our 2015 Legislature prioritize and pay the debts first, such as those owed to counties and state employees, and ensure that essential programs are funded first?   Or will this Legislature continue to pile up debt, spend on new programs, and call it a balanced budget?

For easy to read resources and info on the Arkansas budget and its process, go to:

[v] e.g. DHS Director John Selig responded in a letter to Sen Cecile Bledsoe (Co-Chair of Public Health/Welfare/Labor) that “no unfunded liabilities exist” as a result of the Private Option Medicaid expansion when inquiries were made for that number by 17 legislators in the fall of 2014.