Thursday, April 7, 2016, the Arkansas Senate and Arkansas House of Representative each passed their version of the “Arkansas Works” (Obamacare Medicaid Expansion) bill. Friday the House and Senate are expected to finish the approval process by passing the bill from the other house.

Despite passing the Governor’s bills, the vote totals were not what Obamacare supporters had hoped. 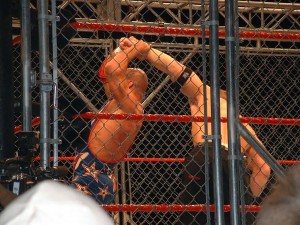 At the upcoming Fiscal Session, Obamacare Medicaid Expansion will be coming into the ring wearing its “Arkansas Works” mask. The opponent is conservative legislators.

If the vote totals remain the same as in the Special Session, there are not enough votes to pass the funding bill for the Governor’s Obamacare program.  The Special Session vote in the Senate on the Senate version of the bill was 25-10 and the vote in the House of Representatives on the House version was 70-30.  Neither margin would be enough to meet the Arkansas Constitution’s three-fourths vote requirement for passage of appropriation (budget) bills.  Obviously, the Governor is hoping that some of the “NO” votes were just political posturing by legislators and they will go along with passage of the appropriation bill.

Will the Governor hold a state agency hostage?

In 2014 there wasn’t an actual appropriation of state funds for Obamacare Medicaid Expansion because it was fully funded by the federal government.  The closest bill to the subject was the appropriation bill for the Division of Medical Services of the Department of Human Services and opponents of Obamacare wanted to force a provision into the bill to stop any funding of the program. Even though the funding for the Division was at stake, the House of Representative defeated the appropriation four times before it eventually passed.

This time state money is being appropriated in the next fiscal year to pay Arkansas’ match for the program. There is no reason for the appropriation not to be in a separate bill. The Department of Human Services already has several appropriation bills so having, one more appropriation bill is completely normal.

If it is not in a separate bill, it will be because the Governor wants to hold an agency hostage in an attempt to gain leverage for passage of his Obamacare bill.

Governor looking for a loophole

Governor Hutchinson’s Chief of Staff, Michael Lamoureux, said the Governor directed staff to look for legal arguments to be able to pass the appropriation bill with less than the 3/4ths vote.  Let us interpret: “Go find an argument against the 3/4th vote requirement so we can take it to a liberal activist judge who is willing to change the historic interpretation of the constitution.”

Their argument falls flat.  These Obamacare supporters would have you believe that no legislation should require more than a majority vote. What they don’t want you to know is when a higher vote threshold is required, it has been adopted by the people as a protection.

Two of the protections adopted by the people requiring a three-fourths vote of each house include:

The people also adopted constitutional protections requiring 2/3rds votes in each house on:

The supermajority requirements listed above are only examples. There are other instances in which the legislature can act only with a three-fourths or two-thirds vote.

Do you really want to give up the protections?

The Arkansas legislature is already a legislation passing machine.  In the first few months of 2015 the legislature filed 2062 bills and passed 1,289 as laws. This means the legislature passed 62% of the bills filed.  Do you really want it to be easier for them to pass more laws?

Obamacare supporters say it is not fair for a minority of the legislature to thwart the will of the majority by stopping funding of an Obamacare program. What they are actually asking is for legislators who voted “NO” – to not vote their conscience, not to represent their constituents, and not rely on the Arkansas Constitution.

Some argue conservatives shouldn’t use the 3/4th vote requirement to stop expanded Obamacare because, “What if the Democrats started blocking appropriations using the same rule?”

As advocates of smaller government and  more money in the pockets of Arkansans, we say “Bring it on!” We need a legislature that is willing to tackle the out-of-control growth of government.

cage match(Noun)
An event in which wrestlers battle in an enclosed location escaping over the top to win.[i]