A news release from the Arkansas House of Representatives said:

“One of the last bills we passed was the amendment to the Revenue Stabilization Act. This outlines the $5.7 billion budget for Fiscal Year 2020. It includes a 2.2% increase in spending from the current fiscal year. It is the lowest amount of increased spending in Arkansas in the last 10 years.”

The message here is, “Look what a great job we are doing to hold down state spending.” And, of course many legislators were quick to repeat the good news on their Facebook and Twitter accounts, and in speeches to community groups.

BUT, if you think the news release is saying overall state spending has been held down…. you have been badly fooled by the carefully crafted words of politicians.

Using carefully crafted wording, the statement actually only refers to that portion of the state budget covered under the Revenue Stabilization Act (RSA).  The RSA act distributes “Net Available General Revenue,” AND General Revenue is only one of several big piles of money from which state programs are funded. 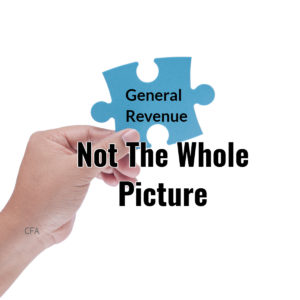 Crafty politicians want you to focus only on one piece of the budget puzzle (General Revenue), not the whole budget picture.

So… when someone brags how they held the General Revenue Budget to a 2.2% increase, you may want to respond,

“Well done, but now tell us about the remaining 81% of the budget.!”

Where Does The Other 81% Of The Budget Come From?

The chart below was prepared by the Bureau of Legislative Research. It should help in understanding the state budget and show how General Revenue distribution is only one slice of the pie. The chart is of the funded budget for Fiscal Year 2018. 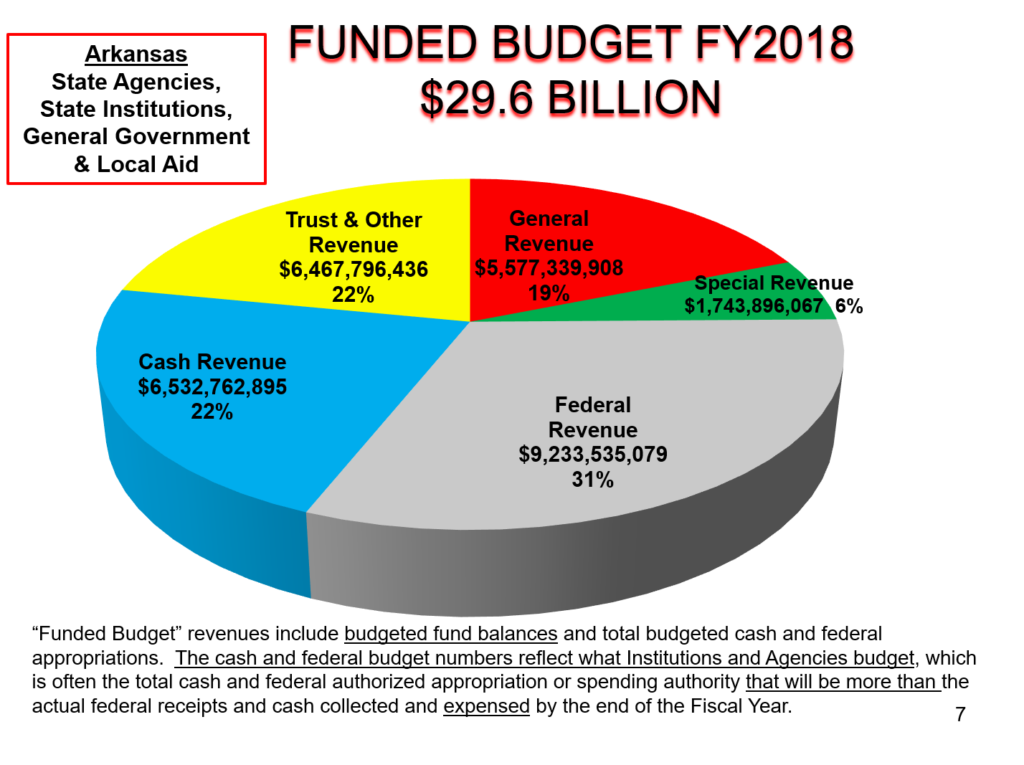 What Happens When General Revenue Spending Is Held Down?

It is a good thing when politicians hold down spending from General Revenues. Well, at least it is better than spending it all immediately.

When General Revenue spending is held in check it doesn’t rule out increases in spending from other state funds.

Did you know that General Revenue not spent gets rolled over into other state funds, such as a surplus funds, and then spent.  One day it is General Revenue and … poof… the next it is spent as some other kind of fund.

Breaking The Cycle of Misdirection

Bragging on General Revenue spending (despite it being only a small fraction of overall state spending) is something both Republican and Democrat politicians have done for a long time.

Spending reform will not happen in Arkansas until politicians quit acting like they are only responsible for General Revenues.