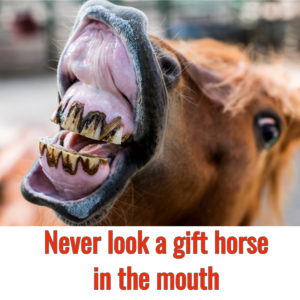 Governor Asa Hutchinson is proposing a reduction in the top income tax rate by phasing-in over a few years.

The saying goes “Never look a gift horse in the mouth” but you better look at this tax plan because the full plan will keep Arkansas one of the worst states in the country for business climate.

Too bad other tax changes the Governor supports will take even more of your money. Get ready to pay an Internet Sales Tax and increased taxes on gasoline and diesel, and that is just the start.  Even with the income tax rate reduction, in fiscal year 2020 the proposed changes will take at least $49 million more out of the pockets of Arkansas taxpayers.

But let’s not focus on the bad ole clouds of approaching tax increases.  For now, let’s just look at the promised income tax reduction and the poor decision to phase-in the reduced rate.

Representatives of the Tax Foundation came to Arkansas to testify before the tax task force to support an immediate income tax rate reduction. They recommended a full reduction, not a phase-in.

Arkansas desperately needs to reduce its tax burden on Arkansans.  Arkansas is in competition with other states for business growth. Well, maybe the word “competition” is a bit of a stretch since the Arkansas tax system is ranked worse than all but four states. Even money giveaways to attract big business is not enough to overcome Arkansas’ poor status because of its taxes.

Why delay the income tax rate reduction? The short answer is: Politicians want to minimize the impact of tax cuts on their pot of money for unrestricted growth in government and for giveaways to cronies.

Politicians who want to delay the cut though a phase-in are saying they are being “conservative” (cautious).  Their “caution” is the same plan Arkansas Democrats used when they were in charge. Their “caution” guarantees state tax collections will continue to increase, especially when they raise other taxes immediately.

Delaying the tax cut is a win for our bloated government because tax collections grow with the economy.

Promised Tax Cuts Can Be Rescinded

When a tax cut is scheduled for the future, there is a risk that the cut will be rescinded before it takes effect.  Do you think that sounds unlikely? It is essentially what Governor Asa Hutchinson did when he took office.

In 2013, the Republican majority in the legislature passed an income tax cut for capital gains. They raised the portion of capital gains exempt from tax from thirty percent (30%) to fifty percent (50%). They also exempted the amount of net capital gain in excess of ten million dollars ($10,000,000). But…. the tax relief would not take effect for two years, 2015.

Along came newly elected Governor Asa Hutchinson. He wanted to get credit for passing a new income tax cut and he decided it would be a swell idea to take away the 2013 tax relief to gain $20 million in tax collections.  The idea being – collect more tax money and claim it is not a tax increase since the capital gains provisions were just taking effect.

The governor got most of what he wanted and the legislature betrayed its promises. Instead of the 50% exemption that had been in effect for only one month, the legislature passed a bill to decrease the exemption to 40%. This gave the Governor more money to play with and he got credit for his own tax cut for different taxpayers.

The story didn’t end there. Business owners who had relied on the tax change were furious about the betrayal. Eventually another bill was passed which restored part of the promised tax … but not for another year.  The rate stayed at 40% for 2015 and only increased to 45% beginning in 2016.  The governor still came out the winner because the capital gains provision has never been restored to what was promised in 2013.

Incredibly that is still not the end of the story on the capital gains tax. The second part of the 2013 tax cut was directed at encouraging huge businesses in Arkansas by exempting the part of capital gains over $10 million.  Guess what.  The politicians are at it again. The tax task force (controlled by the Governor) has recommended eliminating that provision too.

The tax task force spent eighteen months studying Arkansas taxes before making its recommendations.  It worked all that time on the “details” of the plan but when you look at the plan as a whole, it is the same as we got for decades under Democrat control – a plan that determines how much tax growth is expected in the future and then tithes back a small portion to the people while ensuring plenty of new money to grow government without ever having to make tough decisions on spending.

While the tax task force spent months on details, the legislature again refused to consider the need to evaluate the performance of state agency programs and to determine the importance of each programs. Instead most agencies will get an across the board budget increase.

Yes, doing such an evaluation would be a time-consuming job and yes it would anger those businesses that feed off bloated government.  But, didn’t we just dramatically increase legislative salaries a few years ago because they claim to be a full-time legislature? Why don’t they do their job?

The Governor says Arkansas does not have a spending problem, it has a revenue problem. If you believe that, then you will probably want to accept the deal you were offered through email from a member of a Nigerian family who want to make you rich … after you send him some seed money.

If the messed-up congress can pass President Trump’s tax relief, then surely the Republican supermajority in Arkansas can get busy reducing the overall tax burden on Arkansans.

Tell your state Representative and Senator to quit playing games with taxes and to take responsibility for getting Arkansas out of the rotten bottom of the barrel of high tax states.