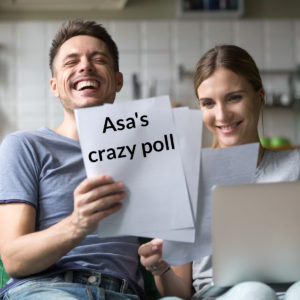 Governor Asa Hutchinson has been touting his internal survey that says you want to keep your taxes high. According to the Governor’s internal survey, 62% of the 800 Arkansans polled support or lean towards supporting a one-half percent (0.50%) sales tax for highways and roads.[i] The Governor is selling his tax (Issue #1) by claiming it is merely the continuation of a tax.

Do you want to pay a high sales tax or is his poll rubbish?

We don’t buy his internal poll for two reasons. First, pollsters are having to admit the opinions of conservative voters are underrepresented in polls because of who will and won’t respond. Second, Asa wasn’t giving the respondents the full picture. For his poll to come out the way he wanted he had to keep those responding in the dark.

Liberal Bias In Polls? You Bet There Is!

The pollsters all said Hillary Clinton would defeat Donald Trump and become President of the United States. The pollsters were stunned when Donald Trump beat her. At first, they tried to explain away the failure of their polls by theorizing that many Donald Trump voters were just too embarrassed to admit they were voting for him. That excuse fell apart as other polls not involving Donald Trump had similar errors that didn’t fully account for conservative voters.

It is not just a polling problem in the United States.  After Nate Silver’s poll was way off in an election in Great Brittan, he wrote “The World May Have A Polling Problem.” He said, “it’s become harder to find an election in which the polls did all that well.“[ii]

Not reaching a cross section of voters is an ever increasing and serious problem for pollsters. Technology has changed. The rise of cell phones and the decline of landline phones makes it more difficult for pollsters to target a cross section. Plus, with so many telemarketers calling you and with caller ID as your only defense, how likely are you to answer calls from unknown callers? If caller ID shows the caller is a pollster, how likely are you to answer the phone? Even if you consider taking the poll, how can you be sure the poll is not designed to target you for fundraising, depending on how you response.

A Huffington Post article asked, “Why Do The Polls Keep Getting It Wrong?” And then the title followed up with “Many Republicans Have Stopped Taking Surveys.” The author, Dr. Benjamin Knoll, Ph.D., abandoned the “shy Trump voter” theory for another theory – either pollsters didn’t reach conservatives or conservatives declined to participate. [iii]

Why might conservatives be less likely to participate in the polls? Dr. Knoll says, “As the polling industry has increasingly come to be perceived as part of the “elite establishment” by many populist conservatives, a growing proportion of the Republican electorate may simply be refusing to participate in public opinion polls. This, in turn, leads to their voting preferences being underestimated in public opinion surveys.”

A similar article appearing in the Wall Street Journal last month was titled, “Why Political Polls Are So Often Wrong.” The title went on to say, “Fewer landlines, fewer people willing to talk. And somehow conservatives tend to be undercounted.”[iv]

Back to President Trump, most polls still predict nothing but doom and gloom for the president, but the conservative voters who don’t answer calls from pollsters keep filling arenas around the country to see he President.

Do you think Governor Asa Hutchinson is concerned his internal poll may substantially undercount conservatives who will vote against high tax?  Don’t be silly. He doesn’t care, because his poll is nothing more than a publicity stunt to try to convince you that your neighbors want the tax and you should too.

Governor Hutchinson’s poll is nothing more than a publicity stunt to try to convince you that your neighbors want the tax and you should too.

The other problem with the Governor’s internal poll is what the Governor is telling people and what he is leaving out. In the next few months, voters will learn more, and the more they learn the harder they will click “NO” to the tax.

What he is telling people is – it is merely continuation of a tax so don’t worry your pretty little head over voting for a tax.

Lets set the record straight and add some pesky facts that he omitted:

If the Governor had given respondents the full picture, how many Arkansans’ besides some “tax and spend” Democrats would say they are leaning toward voting for the tax.

What Message Will The People Hear?

Asa’s crazy claims remain unchallenged by the mainstream media. That means many voters will walk into the polls having heard nothing but the Governor’s slant. Don’t let your neighbors fall victim to being “low information voters.”

To get the word out would you: