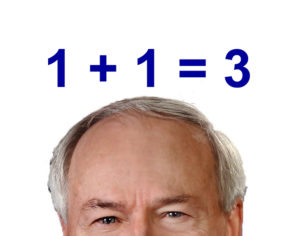 Governor Asa Hutchinson and his allies have demonized Arkansas legislators who want to end the expensive Arkansas Works program or at least to phase it out by freezing enrollment to those already on the program. The Hutchinson administration has claimed such moves would cause a huge budget hole. Hutchinson wanted you to believe the Obamacare program was the only thing saving the Arkansas budget. (Note: “Arkansas Works” is the name the Governor gave to Arkansas’ implementation of Obamacare Medicaid Expansion.)

In 2016 the Hutchinson administration used wild projections of cuts to essential services if state senators refused to vote for his Obamacare program.  For example, the Batesville Guard newspaper relied on the outrageous claims to attack Senator Linda Collins-Smith, claiming her “NO” vote on the Obamacare program would cause major cuts in essential services in Independence County.

Asa has spent over three years pushing the budget hole notion. Now when he needs to justify a reduction in enrollment, we find out that if the state reduces enrollment Arkansas will SAVE money not LOSE money.

The acknowledgement of a savings if enrollment is reduced vindicates legislators who have said the Governor’s Arkansas Works is draining Arkansas’ budget at a time when there are many other state needs and taxes are already too high.

Not only does the report of savings vindicate Senator Collins-Smith, it also vindicates Representative Josh Miller, who proposed an enrollment freeze, and Senator Bryan King who has been persistent in saying the administration’s budget numbers don’t add up.

The Trump administration recently approved a waiver to allow Arkansas to impose work requirements on enrollees. While this is a step forward, it doesn’t necessarily mean “work.”  Obviously, there are exemptions for some people but what about those who can work? There are several ways to meet the requirements other than working part time. Requirements can be met in other ways such as spending time applying for jobs, taking school or college courses, volunteering, job training, etc.

DHS expects the new requirements to result in the Arkansas Works enrollment going down.  So, the Hutchinson administration is shifting its talking points from a “budget hole” crisis without the Obamacare program to a “revenue savings” by reducing the enrollment.

The Human Services Department estimated the new requirements will save Arkansas taxpayers $49 million next fiscal year[i]. But DHS acknowledged the estimate could go higher, because the estimate is based on old numbers and is being updated. In addition, next fiscal year the requirements will only apply to enrollees who are age 30-49. Enrollees age 19-29 won’t be subject to the new rules until the following fiscal year.[ii]

Another factor to be considered in both the cost of the program and the potential savings from reducing enrollment is that Arkansas’ share of the costs of the program continue to increase in each of the next few years.

One factor that will reduce some of the savings is the cost to implement a new system of checking every 90 days to see if enrollees are complying.  Yes, another big government program is needed to verify compliance. Ugh!

Because I said So

You are supposed to just accept what Governor Hutchinson says even when his claims conflict.  Budget hole…. Budget savings.

Asa’s magic math is nothing new.  It is just another example of his continual pattern of using “carefully crafted language” to deceive Arkansans.

Postscript – The cost of speaking up

Just because Senators Collins-Smith and King and Representative Miller are vindicated by the new admission, doesn’t mean Asa won’t keep trying to unseat them for telling the truth about how Asa’s Obamacare program is draining the state treasury.

In Asa’s Arkansas, legislators know if they don’t keep quiet and go along with the Hutchinson machine they will suffer the cost of telling the truth.

[i] “Fiscal year” in Arkansas begins July 1 and ends the following June 30.