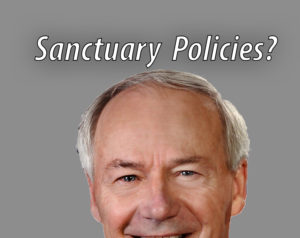 NO. But what the Governor said stunned people who oppose sanctuary policies.

Before we get to the Governor’s statement, here is a short background on the legislation.

Representative Brandt Smith (R) of Jonesboro sponsored HB1042 of 2017 to prohibit sanctuary policies at state-supported institutions of higher education. Rep. Smith introduced the bill after over 100 students at Arkansas State University petitioned the university to adopt a sanctuary policy. Smith’s bill was intended to maintain the status quo of there being no sanctuary campuses in Arkansas.

“We don’t want to create a climate of fear for them,” he said. “We want to recognize that many of them are here in the United States because their parents made a decision to come here. It was not a decision of their own. They are living here as a result of their parents’ decisions, so I think we just need to be very careful about that. I talked to Rep. Smith and expressed my concerns about it.”[i]

The Governor’s statement “We don’t want to create a climate of fear for them” seems out of place. Why would Rep. Smith’s bill create a climate of fear if there are currently no sanctuary policies at public universities and the public universities are cooperating with federal immigration authorities?  Wouldn’t Smith’s bill just be the status quo?  Asa’s peculiar statement has made some wonder whether some state universities are not fully cooperating with federal immigration authorities, but just don’t have an official sanctuary policy.

If universities are fully cooperating, then perhaps the Governor just searched for something to say and decided to repeat a liberal talking point.

The bottom line is:

Tell us on our Facebook page if the Governor was right or wrong in not supporting a prohibition against sanctuary policies.