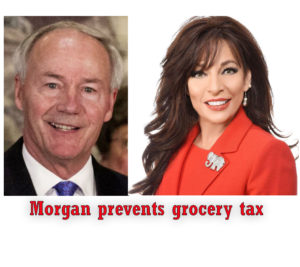 Jan Morgan scored a victory against Governor Asa Hutchinson and a grocery tax increase when, after months of the Governor side stepping the issue, he was forced to say he too opposes an increase in the grocery tax. He issued his statement only FOUR DAYS before early voting would begin.

Jan Morgan is the Governor’s opponent in the Republican primary on May 22 and early voting begins May 7.

Jan Morgan criticized the Governor when his tax task force began discussing increasing the grocery tax. The Governor could have ended the issue right then by saying – I oppose an increase. Yet he didn’t. Instead he did everything he could to side step the issue.

To keep the increase as a possibility, the Governor tried to distance himself from the task force. His tactic was only a diversion because regardless of whether he had control over the task force, the fact remained  a simple statement of opposition by him would have killed the issue months ago.

Jan Morgan was so effective in her fight against a grocery tax increase even the Democrat candidates joined in to oppose an increase.

Still Asa did not cave, instead he continued side stepping the issue, saying he had always been a supporter of eliminating the sales tax on groceries. His tactic blew up in his face because it highlighted Asa’s broken promise to eliminate the grocery tax.

Broken promise: In 2006, he promised if elected he would immediately eliminate the grocery tax. Yet after eventually winning in 2014, he sat in his office for over three years without doing or saying anything about eliminating the grocery tax.

Broken promise: It also highlighted his 2014 promise not to raise ANY tax during his term.  Yet, he broke that promise, too, by passing tax increases after tax increase and supporting even more tax increases.

Asa tried to keep the task force study going by saying, “it is disappointing that candidates are afraid of legislative review and debate.” Its interesting he wanted debate that could result in us paying more grocery tax, but he didn’t want to debate Morgan.

With Jan Morgan’s support growing daily, at long last Asa gave up and issued a statement saying he opposes a grocery tax increase. He waited until four days before early voting would begin.

The story might have stopped there but in his letter, he repeated his claim that he has always been for eliminating the grocery tax, which again highlighted his broken promises.

Jan Morgan addressed Arkansans who are concerned this will be just another of the Governor’s broken promises. She said don’t worry because, “with your help we won’t have to worry anymore about his broken promises because I intend to be governor and Asa won’t be able to break any more promises.”

Win or lose, Jan Morgan deserves the credit for stopping the very real threat of Asa increasing the grocery tax.

PLEASE SHARE THIS ARTICLE WITH EVERYONE YOU KNOW. Most people will only hear the pro-Asa spin by the Arkansas Democrat-Gazette.

Compare what you learned here to the Democrat-Gazette’s horrible pro-Asa piece that gives his message and ignores Jan Morgan’s written response. Their article is titled “Arkansas governor: No grocery tax rise” and appears 5/4/2018.