The Governor and the state legislature are busy with taxes.  Some taxes have been lowered for some groups, but only in future years. They are also busy raising many taxes. At this rate the tax burden on Arkansans will never go down. 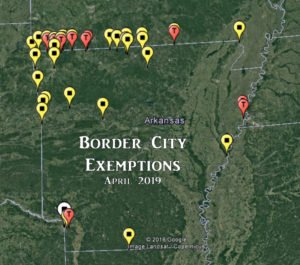 One way to see Arkansas taxes are too high is to look at Arkansas’ border city exemptions for motor fuel, tobacco, and income tax. Take a look at the map.

The map does not include motor fuel exemptions in Osceola and West Memphis. Although their exemptions do not currently apply, they could receive exemptions depending on what tax changes are made in Arkansas and Tennessee. (Follow the link for DFA’s list of border city exemptions for motor fuels and tobacco.)

Over many decades cities suffering from Arkansas’ high taxes have lobbied their legislators for border exemptions to apply the rate of their neighbors just across the border. Some were cities were successful in getting legislation passed but others were not.

Texarkana has an exemption from the Arkansas Income Tax for individuals. The legislation for Texarkana was written so narrowly only Texarkana qualifies.  To be eligible the city must be divided from a larger city in another state by a street state line.

Legislation for other boarder city exemptions could not be written so restrictively and so several cities qualified. Some of the legislation was written in a way that lets a city farther from the border get an exemption while some cities closer to the border do not. A couple of the cities listed by DFA look so out of place we have wondered if there was another city by the same name closer to the border.

The border city exemption for tobacco is ending because the legislature decided this year to raise more money by passing legislation to end the exemption.[i] The same legislation raised the minimum price of cigarettes so cigarettes purchased on the boarder were probably going to be higher than just across the border anyway.

Border city exemptions are not a good solution to the problem, but we can understand the frustration of our cities watching retailers locate just across the border.

If Arkansas taxes were competitive with other states, there would be no pressure to have border city rates.

It Is Even Worse

While the map illustrates the effect of Arkansas’ high taxes, it does not provide the full picture. It is only a snap shot of certain taxes. The map is also limited because it only shows those border cities lucky enough to get an exemption.

One organization studying taxes across the nation ranks Arkansas the 46th worst state in the nation for its business tax climate.[ii]

In 2017 the legislature created a task force to study Arkansas’ taxes.  After many months of study, the task force came up with some tax cuts for certain groups (to become effective in some time in future years), but immediate tax increases on everyone. Swell….

The study never considered it to be a problem that Arkansans pay more per person for state government than people in most states.

The study never considered spending priorities.  Instead, of making you a priority, the priority appears to have been to keep spending growing.

Arkansans living near our borders deserve a state government that will give them a tax system that won’t put them at a competitive disadvantage with the people on the other side of the border. Come to think of it, all Arkansans deserve that. Maybe someday……

Taxed Too Much Already

The legislative session is coming to a close, but the Governor and legislature are still seeking to increase several taxes. One such tax in the internet sales tax, which is a tax on you! (And no, it is not about helping mom and pop stores compete with out of state sellers because people buy off of the internet because of the convenience or because the item they want is not available locally.)

Tell them to STOP raising taxes.

Stop raising our taxes even if it is part of a bill to reduce a tax for some group of taxpayers.