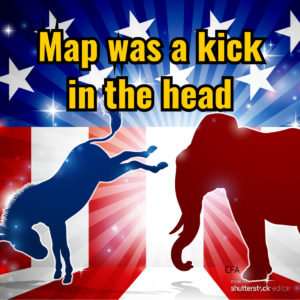 The 2012 election is the moment the Republican party became the majority party in both houses of the Arkansas legislature. Within days the Republican momentum was minimized when the Democrat Party was able to select which Republican would be the Speaker of the House and gain significant concessions that included several Democrats being appointed as chairs of House committees. With the help of Speaker of the House Davy Carter, Governor Mike Beebe (D) was able to pass Arkansas’ version of Obamacare Medicaid Expansion and get Republicans to stop focusing on social issues and instead work on ending the session by passing Beebe’s budget. Although the Republicans had fifty-one votes in the House, discussions about cutting the bloated Arkansas budget never got off the ground and a House bill by then Representative Bruce Westerman (now a U.S. Congressman) to limit government growth failed because some Republicans did not vote for it.

Had just a few more Republicans been elected the Democrats could not have pulled off this coup and the Republican era might have been much different even today.

In hindsight we now see that a map adopted in 2011 secured enough Democrat seats to make the coup possible.

REAPPORTIONMENT AND THE MAP

Arkansas legislative district boundaries are the responsibility of the Board of Apportionment. Who is that?  It is a three-member board made up of the Governor, Attorney General, and Secretary of State.  In 2011 that was two Democrats Governor Mike Beebe and Attorney General Dustin McDaniel and one Republican, Secretary of State Mark Martin.  Because the boundaries only needed two votes to pass, it was the two Democrats who would determine the boundaries.

When legislative reapportionment occurs the legislators most likely to get a favorable district are the influential legislators who are in good standing with a majority of the three-member board. Legislators of the other political party and political enemies of the Governor are much less likely to fare well.

In 2011, two of the members of the House of Representatives who were on Governor Beebe’s bad list were Representative Lori Benedict of Salem and Representative Linda Collins (Collins-Smith) of Pocahontas. Both were Republicans (and very conservative Republicans at that) and both had been a thorn in the Governor’s side.  In addition, Linda Collins had been elected as a Democrat and received much publicity for switching to the Republican side. Representative Collins was from an area of the state where many people considered themselves “Conservative Democrats” but once she was in Little Rock the Democrat leadership in the House read her the riot act ordering her to quit voting conservative, she refused and this ultimately led to her changing parties.

The new House district boundaries drawn by Beebe and McDaniel reflected the wrath of the Democrat Party on these two Republicans.  They were both put in the same district.  If they ran against each other there would be one less Republican to annoy the Governor.  Representative Collins chose to let Benedict be the candidate for the district and she chose to run for a Senate seat held by a popular incumbent Democrat David Wyatt.  Still she came close to victory garnering 48.8% of the vote.

Benedict had a difficult district to win in. It stretched from Salem in the west to Pocahontas in the east with the greater population being in the east where her Democrat opponent lived. Yet she too came close, garnering 48.6% of the vote against her Democrat rival.

THE MARGIN OF CONTROL

Obviously with a Democrat majority on the Board of Apportionment there were other areas of the state where the new boundaries helped Democrat incumbents and hurt Republican incumbents, but just the one example we have given changed the course of politics for years to come.

As Speaker, Carter named the chairs and vice chairs of the standing committees and had many other appointments to House positions.  This gave Carter enough favors among skeptical Republicans to help Beebe pass his Democrat legislative package. Carter’s influence is also likely to have been a significant factor in the selection of his successor Jeremy Gillam who also gave plum positions to Democrats. Carter helped pay back the Democrats not only through appointment and supporting Beebe’s agenda, Carter also refused to help any Republican candidates in 2014 against Democrat incumbents and further he actively supported some Democrat candidates.

This article is not about crying over spilt milk and what might have been.  The purpose of this article is to alert you to what will take place in 2021 and in the election of 2022.

The 2020 census will be the basis for drawing new boundaries for Senate and House districts. The Board of Apportionment should be finished with the new boundaries by mid-2021 and the newly drawn districts will be used in the 2022 elections.

Who is on the current Board of Apportionment?  It is Governor Asa Hutchinson (R), Attorney General Leslie Rutledge (R), and Secretary of State John Thurston (R). On the face of it this should be good news for the Republican candidates for the legislature but there is something else to consider.

While Governor Asa Hutchinson has supported the Republican Party, he has worked hard to get rid of Republican legislators who are staunch advocates of smaller government  and lowering the overall tax burden (not just shifting taxes) and dedicated to sticking to the principles of the Arkansas Republican Party.  In 2016 he tried to defeat conservative Representative Josh Miller (R) by supporting and donating to a primary opponent but Miller won anyway.  But in 2018, Hutchinson was successful in helping defeat conservative Senators Linda Collins and Brian King.

With Hutchinson’s track record of trying to defeat conservative Republicans by pushing Republican candidates who are comfortable with big government who do you think will be on his bad list during reapportionment?

The two other members of the Board of Apportionment would have a very difficult time saying “No” to the Governor’s maps.  For example, Attorney General Leslie Rutledge needs the Governor’s support in her future election.  She is rumored to be a candidate for governor.

If you support the Republican principles of lower taxes and smaller government fiscally conservative Republican candidates very much need your support in 2020 and in 2022 when their districts boundaries might be changed for the worse.

A proposed constitutional amendment to end the Board of Apportionment and set up a new commission might be on the 2020 ballot if it receives enough signatures. The Attorney General has already issued opinions on ballot titles for similar or identical proposals submitted in 2018 and in 2019. We have not yet evaluated the proposals.