A Vote Against Studying Gun Restrictions: What It Means

On September 20, the Arkansas Legislative Council (ALC) voted against conducting committee studies on two ideas for legislation to impose gun restrictions. Gun rights activists praised ALC’s action and are hoping this is a sign the legislature will continue to vote to protect our Second Amendment rights in future legislative sessions.

But was it really a sign our politicians will stand strong against gun restrictions in the future or was something else going on? While some of the legislators who spoke against the studies have been consistent defenders of the Second Amendment others likely had other motivations.

Before I explain I need to tell you about the proposed studies that were rejected.

Rep. Garner said constituents expect the legislature to do “something” about gun violence.  I doubt she means reducing the number of public gun free zones so people can defend themselves. 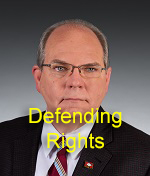 Senator Terry Rice, R- Waldron, who is a staunch defender of the Second Amendment, made a motion to reject both studies. He said in his view the proposals were “anti-Second Amendment”. Other Senators and Representatives joined in the discussion and his motion passed by a divided voice vote. (No record of those voting “for” and “against.)

Several objections were made to the studies.  Considerable discussion related to a procedural issue. Legislators objected to the studies going to the wrong committee. Rep. Garner wanted the studies to go to the Public Health Committees so the proposals could be portrayed as health issues instead of firearm issues.  But Public Health is clearly the wrong committee.  Firearm legislation in the House of Representatives has been assigned to the Judiciary Committee since the creation of the current committee system in the 1970’s.  The Judiciary Committee in the Senate used to handle such issues, but in an odd move last session the Senate gave jurisdiction over gun issues to the Senate City, County, and Local Committee. (It was an odd move because firearms are not a local issue. It is a statewide issue.)

In addition to objecting to the studies going to the wrong committees, some legislators stated the people of Arkansas do not want such legislation and that the studies would be wasting taxpayer money over the next several months, especially with the possibility of paying consultants to be brought in by both sides.

There were also political factors going into the vote.

But there is also a very good reason to punt this political football down the field. It makes no sense to get in a highly charged emotional debate at this time. The first-time legislation on gun restrictions will come up for a vote in Arkansas is January 2021 which is during the next Regular Session of the legislature. With the next regular session being about fifteen months away, Arkansas has plenty of time to watch and learn from the gun debates raging in Congress and in other states. Both defenders of the Second Amendment and the gun-grabbers will be watching and learning.

If you think the Arkansas Legislative Council vote means Arkansas legislators will never cave in you are mistaken. Remember, in 2017 some of the same legislators took a bill to allow college employees to carry a concealed handgun to protect themselves and their students and changed the bill into a restrictive regulatory nightmare called enhanced carry.

For some politicians, their positions will evolve based on the election they face. After the political party primaries, watch for some Republicans to reach out to liberal voters by showing sympathies for restrictions.

The left will be busy over the next fifteen months trying to persuade your legislators to pass these and many other restrictions.

Only time will tell.