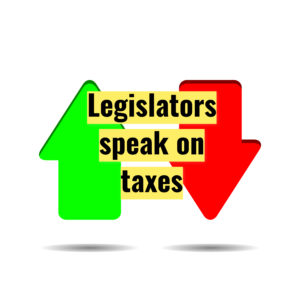 A few weeks ago, a state legislator was introducing himself to an audience. Looking for something to say, he added “And this year we passed the biggest tax reduction in Arkansas history.” His voice tailed off toward the end of the sentence and the audience sat silent. Several of the blank stares came from people right up front who knew the whole story about tax changes in the 2019 Arkansas legislature.

Did 2019 bring Arkansas big tax relief or… higher overall taxes?  You will want to hear the assessment given by several sitting Arkansas legislators who were interviewed by Paul Harrell on Conduit News.

The campaign season begins in a few days and state politicians will be bragging on tax cuts. That is only half the story – a deception. You need to know about not only the tax relief passed in 2019 but also about the tax increases.

SPOILER ALERT: Because of the combined Arkansas tax changes this year you will have less money in your pocket for Christmas.

Taking One Tax Measure And Ignoring the Rest – Deception

On February 19th, Governor Asa Hutchinson signed into law his plan to cut Arkansas’ top income tax rate. It has been described as the biggest tax cut in Arkansas history. The tax cut will be phased in and will become effective in future years. It was such big news that the words “biggest tax cut in history” has made it into the talking points of most state politicians.

As for tax relief, the session brought not only a future income tax cut in the highest bracket, but also an annual $25 increase in the homestead property tax credit.  But then you get to the bad news for taxpayers. The legislature passed:

Conduit for Action reviewed the projections from the Department of Finance and Administration on the revenue impact of the tax legislation. We found an overall increase in your tax burden.

What Legislators Said On The Show

The largest tax relief in Arkansas history….. and then it was gobbled up …. by more taxes.

We expect some legislators and their campaign literature to brag on the tax RELIEF bills but avoid telling you how they voted on the tax INCREASE bills. If so, how will YOU respond?