On Thursday, Senate leaders unveiled a proposed rule on Senate ethics. The proposal came as criticism of corruption by Senators is mounting. The proposal appears to include some improvements that I hope to discuss later, after I have time for a more detailed review of the proposal. For now, we need to talk about the proposal’s power grab that will remove the ethics role of the few senators who have dared to criticize business as usual. 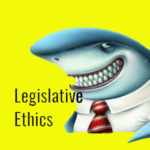 The proposal creates a Committee on Senate Ethics made up of five members appointed by the President Pro Tempore of the Senate. Sounds like a step forward. Right?  NO, it is a significant step backwards.

I am surprised Senate leaders are using the exact same ploy they have used in creating task forces – take away authority from an existing committee, control who gets to be members, and thereby control the outcome.

Let’s compare the makeup of the committees

With the Rules Committee you get a cross section of the Senate.  With the proposed Committee on Senate Ethics you get only allies of one Senator, the Pro Tempore.

By creating a new committee instead of using the Rules Committee, Senate leaders are avoiding having to give a larger ethics role to Senators who have dared speak out against corruption and business as usual. The Rules Committee membership includes Senator Bryan King and Senator Terry Rice.  Senator King had the audacity to propose a bill to require Medicaid providers to disclose business relationships with legislators. Senator Terry Rice dared to call for the resignation of Senator Jeremy Hutchinson. Senate leaders may also be concerned about other voices of reason on the Rules Committee such as Senators Caldwell, Hickey, and Stubblefield.

The Rules Committee is a mixed bag of reformers and those who protect the status quo – but that is why it is a good committee to conduct investigations. Here is the full membership (there are currently only 14 members listed on the committee): Bruce Maloch; Trent Garner; Cecile Bledsoe; Ronald Caldwell; Eddie Cheatham; John Cooper; Scott Flippo; Jim Hendren; Jimmy Hickey, Jr; Blake Johnson; Bryan King; Terry Rice; Gary Stubblefield; and Larry Teague

Leaders have no good reason to create a new committee. No offence to the Rules Committee, but it is not a busy committee when compared to other committees. Giving it additional ethics duties would not be a burden. There would likely be relatively few ethics complaints to make it to the hearing state. With no need to create a new committee, this looks like either window dressing to make it look like more is being done or worse an attempt to control the results in case someone in leadership has an ethics problem.

I had heard good things would come out of the ethics proposal, so the move by Senate leadership to stack the deck is extremely disappointing. I hope the full Senate will fix this mess, and I hope I will see some better provisions as I read the rest of the proposal.

If you would like to read about current ethics law and rules and the loopholes built into them you might like to read Sham Ethics Rules for AR Legislature & Lots of Loopholes.

[i] Senate Rule 7.04 (a) The Rules Committee shall consist of fifteen (15) members, and all proposed action touching the Senate Rules, Joint Rules, and order of business shall be referred to the Committee on Rules.

Senate Rule 7.01 (b)(6) The next senior member shall then choose a position on one (1) Joint Committee or one (1) Select Committee. The seniority rotation procedure shall continue, without regard to party affiliation, until the member with the least seniority makes his or her selections. Only a member of the majority party may serve as the Chairman of the Joint Performance Review Committee.