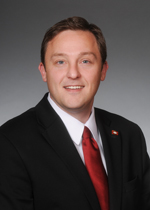 SPEAKER OF THE HOUSE JEREMY GILLAM is the latest legislator to dump his constituents to take a high paying state position. His term of office would not have ended until the end of this year, but he took an early exit to take a $130,000 position with the University of Central Arkansas as their lobbyist.

Although there is nothing illegal about using your position as a legislator to get a high paying state position, there should be. It reeks of a sickening foul odor.

There is an “appearance of impropriety,” and there is good reason to prohibit this inside route to high pay. This arrangement further erodes the little confidence the public has in government.

On the other hand, was the position just an opportunity that fell out of the sky because he was the best person for the position?  Gillam says it “just kind of organically developed over the last few months.”

But it appears Gillam had been very busy looking to use his position to land a good state government position. Gillam said, “I visited with a lot of different people about a lot of different possible roles.” That by itself doesn’t indicate a search for a government position, but Gillam also said, “I still wanted to serve and do something that I felt was making a difference,” Serve? Yes, “serve” is the word you use when you are looking for a government position or joining the military or becoming a missionary.  He wasn’t talking about the military or mission work. He was looking for a high paying state position.

Gillam’s attempts to find a government position don’t appear to have been a secret from anyone. The Democrat-Gazette reported.

For several months, there has been speculation about whether Gillam would go to work for a state agency such as UCA or the state Plant Board.

GOVERNOR HUTCHINSON ON ISSUE OF LEGISLATOR TO STATE EMPLOYEE

Legislators grabbing high paying state positions always looks bad, but Governor Asa Hutchinson sees no problem with legislators voting for his agenda and then giving them high paying state positions.  The Governor created high paying positions for Rep. Bill Gossage[ii] and Rep. Kelley Linck[iii] in 2016 and the two quickly resigned the legislature and left vacancies in office.  As for Jeremy Gillam’s position, the Governor sends his congratulations to his ally. Such a high-profile hiring would not happen without the Governor’s efforts, blessings, or acquiescence.

State law bans a legislator from becoming a registered lobbyist for two years after the legislator leaves office.  Why?  Two reasons.  First, to avoid the appearance that the lobbying position was payback for voting the right way. Second, to limit a former legislator’s abuse of his relationships with his former colleagues.

The ban does not apply to lobbying as a state employee.  Why?  Because state employees are exempt from having to register.  Therefor a state employee is never a “registered lobbyist” and the legislator can jump right in to use and abuse his legislative friendships.

The same rationale for requiring a cooling off period before becoming a “registered lobbyist” also applies to becoming a state lobbyist or state employee – avoiding the appearance the position is payback and limiting a former legislator’s abuse of legislative friendships.

Think about this….this fall the legislature will hold its budget hearings for the 2019 legislative session.  The legislature will review UCA’s budget and make recommendations for change.  How do you think the budget process will go for UCA with Gillam as their lobbyist?  Did you know all or nearly all the state Representatives who will be reviewing the UCA budget were appointed by Gillam to some legislative position?

As Speaker of the House, Gillam appointed the chair and vice chair of the 10 standing committees of the House. For each of the ten standing committees, Gillam appointed the chair and vice chair of the three subcommittees for each committee.  Gillam also appoints all 15 members of the House Rules Committee. That is already 95 appointments for legislators and that is not counting appointments and de facto appointments to numerous other committees and task forces! This also does not include the favors the Speaker did for legislators, the Governor and lobbyists to get certain bills heard in a timely fashion or delayed. Nor does it include his approving out-of-state travel for numerous legislators.

The office of Speaker of the House exemplifies why a legislator should never be allowed to use his or her position to jump into high paying state jobs.

The media and social media are filled with congratulations to Jeremy Gillam.  The only criticism was mild criticism by Rep. Michael John Gray, who is also the Chairman of the Democrat Party in Arkansas.  It seems the leader of the minority party is always the one designated to criticize the ethics of the majority party, whether it is the Republicans in power or the Democrats in power. Rep. Gray is also one of the very few members of the House of Representative who Gillam didn’t appoint to a committee position. Still, Rep. Gray’s criticism was very mild.

Gray said he questions “the loophole there” that essentially allows lawmakers to accept lobbying jobs for state agencies after leaving office. That loophole “speaks to the things that people don’t like about government,” and lawmakers should make it clear to the public that the exemption exists, Gray said. He said he isn’t taking a shot at Gillam or begrudging him for taking the job with UCA. “But I just think it is a problem in our system,” he said[iv]

Here is an idea….

DO YOU SUPPORT A TWO-YEAR COOLING OFF PERIOD BEFORE A LEGISLATOR CAN BE HIRED AS A STATE EMPLOYEE?

No need to ask Governor Hutchinson. He is enjoying arranging state jobs for legislators who have a track record of doing what he tells them.