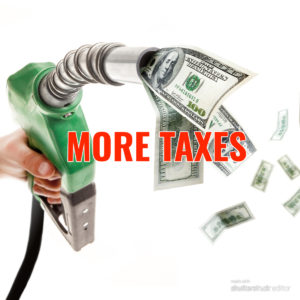 At the time of passage, the 2011 lead sponsor of the temporary tax increase (Rep. Jonathan Barnett) emphasized how that temporary increase would only last for ten years. Now, former Representative Barnett opposes the new tax plan. Barnett told the Arkansas Democrat Gazettethis morning (February 28) he opposes the new tax increase and would most likely vote against it at the ballot box if it gets there.

This video below shows Barnett in 2011 recommending support of the sales tax increase because it was a temporary tax needed only for certain new road projects:

Several highway funding alternatives without tax increases have been filed or will be filed soon during this Legislative Session. The Bureau of Legislative Research has been backed up with writing and reviewing the Governor’s transformation bill that is over 2,000 pages long, delaying some plans that have been discussed by legislators in the House to fund highways without tax increases.

One plan (HB1541) by Rep. Julie Mayberry would provide additional funding for roads without raising taxes. Rep. Mayberry joined Paul Harrell on Conduit News Radio to discuss her plan and the importance of not raising taxes on the people:

In 2011-2012, the people were promised a temporary tax which had a specific end date to address a specific problem—they approved it.  Now, the Governor and some legislators are looking to undermine their past promises to the people by passing a new permanent sales tax while calling it simply an extension of the old one. Republicans hold super-majorities in the House and Senate.

You can find your legislator’s contact information at this link HERE. Please call or email them asking them to support the plan(s) to fund highways without raising taxes.