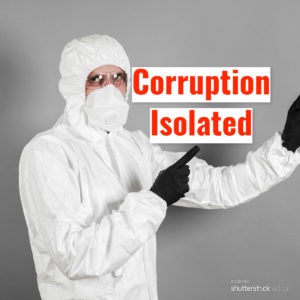 When former state Senator Jeremy Hutchinson pled guilty to felony corruption charges the general reaction of politicians was sadness. Sadness for their friend. So where is the sadness for the public who have to endure the corruption and endure the passage of legislation that had its roots in corruption?

Senator Hutchinson pled guilty of taking bribes disguised as retainer fees as an attorney from executives of Preferred Family Healthcare and from an orthodontist.  He also pled guilty of a felony stemming from converting campaign funds to personal use.

Jeremy Hutchinson’s corruption has been treated as if it was an isolated event, as if now that he is gone… all is well in the legislature.

Amazing how many isolated instances of corruption there are. Guilty pleas or convictions for corruption while in office since 2015 include:

And that doesn’t even include a guilty plea by a former state Representative for conduct after leaving office. Nor does it include guilty pleas or convictions of others involved in the legislators’ schemes.

All isolated events. Right? Nothing to see here.

And speaking of “isolated events,” there have been a string of reported instances in which the conduct of a legislator was questioned as to whether the conduct should be considered unethical.

Politicians are so unconcerned about a public backlash that no significant ethics legislation was passed  this year. There were a couple of new laws passed with minor penalty changes. One of the two bills was a Trojan horse to blatantly grab campaign money for personal use as long as the legislator can claim it is an expenditure an officeholder might make. Shame on them!

Last year the Senate adopted an ethics rule requiring some more financial disclosure … but it is just an internal rule. And apparently the Senate rule is so weak the House of Representatives didn’t bother adopting a similar rule. More importantly, the Senate and House avoided putting the additional disclosure requirements in the ethics law where the Ethics Commission would have a role in conducting investigations and penalizing offenders.

And what leadership has Governor Asa Hutchinson given on ethics reform? As a former federal prosecutor and now chief executive officer of state government what has he done? Nothing, zero, zilch, nada.

Jeremy Hutchinson’s “retainer fees” were an open secret but legislators remained silent … that is all but Senator Linda Collins who in 2017 filed a bill to prohibit legislators who are attorneys or consultants from representing clients before the legislature. The Senate defeated the bill.

Don’t you think you should be telling your legislator on every occasion, you are sick of them turning a blind eye to corruption and and sick of weak ethics laws?

“Silence in the face of evil is itself evil: God will not hold us guiltless.

Not to speak is to speak. Not to act is to act.”