The headline in the Democrat-Gazette read: “Arkansas’ ’19 surplus 5th-largest in 30 years”.  The article began, “Arkansas’ general-revenue surplus of $295.4 million in the just-ended fiscal year ranks as state government’s fifth-largest surplus during the past 30 years, records show.”[i] 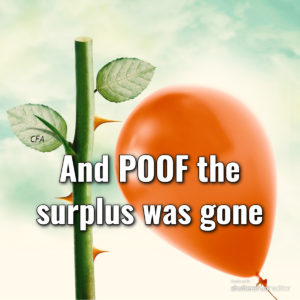 Unfortunately, this news is just political spin. Most of the money was already obligated for spending months ago. Part of the state budget is always funded from money obligated in one fiscal year but spent in the next. Arkansas’ fiscal year ends on June 30. General revenue still in the treasury at the end of the day is declared a surplus and then POOF the money is transferred for spending authorized months before.

The surplus is just an accounting anomaly that always occurs at the end of the fiscal year.  It is not savings.

The following is not a perfect analogy but it helps explain the annual claim of a surplus while basically spending everything.

You look at your credit card bill on June 30 and the statement says you owe nothing. Would you then brag to your friends you don’t have any credit card debt? But wait …. if you look further down the statement you will see transactions listed as “Processing.”  These might include charges for a large car repair bill, the payment for your kid’s braces, and spending at Walmart for groceries and a big screen TV. If you were the state of Arkansas you would brag to your friends about owing nothing and ignore the spending that has not cleared yet.

Months ago, the Governor and the legislature had already obligated the spending of most of the money claimed as surplus and even before the claim of a surplus was publicized the money had already been transferred for use.

HIGHWAY FUND. $73.8 million of the supposed surplus was transferred to the Arkansas Department of Transportation for use for highways and roads.

GENERAL REVENUE ALLOTMENT RESERVE FUND. Another $173.5 million was transferred to the General Revenue Allotment Reserve Fund. But only $72 million remains for the legislature to spend next year.

Where did the rest go?  $101.5 million was automatically transferred to the Rainy Day Fund to be spend on various projects.

What is the “Rainy Day Fund”?  It is basically the same fund previously called the General Improvement Fund (GIF) until Senator Jake Files, Senator Jon Woods, and Representative Micah Neal were caught skimming off part of GIF for themselves. It was given a new name because of the bad PR.

RESTRICTED RESERVE FUND. The Democrat-Gazette article continues, “The remaining $47.9 million of the surplus was transferred to the state’s new restricted reserve account, and that funding is unobligated, [DFA spokesman Scott] Hardin said.” Saying the funds are “unobligated” is technically correct but it should be obvious the money was actually transferred to cover a mandatory transfer from the Restricted Reserve Fund to the State Highway and Transportation Department Fund.

If this is correct, why send an additional $12.9 million to the reserve fund? Perhaps it is for replenishing the fund after a transfer to the Transportation Department last fiscal year.  How much was transferred last fiscal year?  We don’t have that number before us right now but it is sufficient to note Section 7 of Act 259 of 2018 authorized transfer of an amount up to $15,991,346.

Calling It A Surplus Makes It Seem All Better

Calling the spending a “surplus” is intended to make you think politicians are being frugal and to keep you from questioning the spending of hundreds of millions of dollars – after all it is just surplus money.