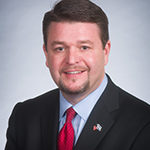 Senator Jason Rapert (R) passed an amendment to a budget bill to allow Arkansans to use their 529 college saving plans to also pay for tuition at public or private schools (K-12). Current law allows taxpayers an income tax deduction for up to $5,000 in contributions to their savings plan and allows the taxpayer to make tax-free withdrawals to pay for higher education expenses.

The amendment gives parents more flexibility to use their savings plan by allowing them to make withdrawals to pay for K-12 tuition. The ability to use the saving plan for K-12 tuition gives parents flexibility in obtaining quality K-12 education for their children. This helps parents choose the best education which also helps their children prepare for college.

Senator Rapert’s amendment to HB1122, which is a budget bill for office of the Treasure of State, was first adopted by the Joint Budget Committee. The House of Representatives then adopted the amendment by majority vote, but the next vote will be more challenging.  To pass the amended budget bill in the House of Representatives will require approval of three-fourths of the House, which is seventy-five (75) votes.

What happens if the amended budget does not receive the required 75 votes?  If there are not enough votes the House will face the choice of either: (1) removing the amendment and passing the budget without it; or (2) continue to fight for the amendment perhaps in special session.  There is no immediate threat to the budget of the Treasurer’s office or to any state budget.  The current budget applies until June 30 and the legislature has until then to finalize budgets.

Conduit for Action supports Senator Rapert’s amendment.  The amendment needs your support too.