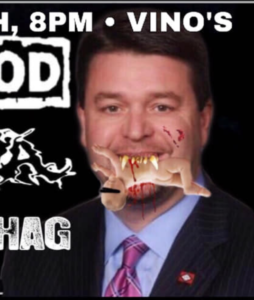 State Senator Jason Rapert is calling for a boycott of Vino’s Pizza-Pub Brewery in Little Rock for using a vile depiction of him to promote bands schedule to appear at Vino’s. In promoting the appearance of bands such as EyeHateGod, the event coordinator of Vino’s posted a picture depicting Senator Rapert with fangs and eating a baby.

Senator Rapert has drawn the ire of leftists, especially Satanists, for sponsoring the placement of the ten commandments on the State Capitol Grounds.

Will a call for a boycott have any effect on the promotion? That remains to be seen. Vino’s has a diverse clientele. But, Vino’s also has been one of the venues used by lobbyists for events for legislators.

Here is a list of the 2017-2018 lobbying events for the legislature held at Vinos:

These events were large because the invitations were to 100 members of the House and staff, 35 Senators, and then add in spouses and other guests. Even if Senator Rapert’s call for a boycott fails to have an impact on the promotion, don’t you think it likely legislators will tell lobbyists “Find somewhere else to lobby us.”

Haven’t heard of lobbyist events?  Here is an explanation. Legislation was adopted to prohibit legislators from accepting gifts from lobbyists, but it includes several loopholes. One big loophole allows lobbyists and their clients to give legislators free food and drinks, if the entire House or Senate is invited or if a committee is invited. On many days during a legislative session, lobbying interests provide legislators with three free meals a day.  Meanwhile, the legislators pocket $59 per day in taxpayer money for meals and incidentals.