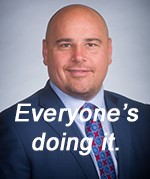 According to the FBI, former Senator Jeremy Hutchinson said, “Everyone was doing it.” Maybe he was right.

Jeremy Hutchinson, who is the nephew of Governor Asa Hutchinson, resigned from the Arkansas Senate in 2018 after being indicted by the federal government for a scheme to take campaign funds as personal income, prohibited by the state, and also not reporting it as income on his federal tax return. When interviewed by the FBI in 2014, Senator Jeremy Hutchinson’s response was, “Everyone was doing it.”

Not the best defense.  Try using that line on a state trooper when you’re caught speeding and see if it gets you anywhere. It won’t.

We decided to look and, sure enough, we quickly found legislation filed this session to allow campaign funds to be used for additional personal expenses. We can’t say the bills were filed to validate an existing illegal practice, but we can say…. some legislators are trying to change the law to legitimize using campaign funds in a way that is now illegal.

Two bills that would let politicians grab campaign money for personal use are SB 258 and HB1687. The Senate bill is so bad, we don’t have space to talk about the House bill.

Senate Bill 258 is being sold as legislation to “INCREASE THE PENALTY FOR TAKING CAMPAIGN FUNDS AS PERSONAL INCOME.” That sounds fine until you read the legislation and see that it’s actually about allowing politicians to grab campaign funds for personal expenses. The greed in the bill is HUGE!

SB258 is an example of the use of a deceptive title to make a bill sound restrictive while the body of the bill opens the door wider.

It allows an expenditure by a:

“Member of the General Assembly concerning an apartment leased solely for use while in the capital so long as the apartment is not maintained as the primary personal residence of the officeholder and per diem is used to pay a proportional share of the cost incurred for rent and utilities in connection with maintaining the apartment.”

The bill acknowledges the receipt of taxpayer money while still letting legislators grab campaign funds for personal use to pay for a swell apartment in Little Rock. It is still an extremely greedy money grab, and it is still using campaign funds as personal income, no matter what they want to call it.

The apartment provision is only the beginning of the greed found in the legislation.  The bill also gives any elected official huge exemptions to use campaign funds for “officeholder activities.” That could be nearly any expense.

There is NO good reason why campaign funds should be used as personal income by calling it “officeholder activities.” Looks like their philosophy is – “To the victor belongs the spoils.”

As if the exemptions in the bill weren’t already big enough to drive a truck through, another provision allows the Arkansas Ethics Commission to add exemptions. (You should note: Two of the five members of the commission are appointed by legislative officers.  The other three members are appointed by the Governor, Lieutenant Governor, and Attorney General.)

Keep the lobbyists happy and an incumbent can amass a sizable war chest for the future (up to the salary of the office). Keep the lobbyist happy….. and raise enough campaign funds to get a plush apartment and pay for other personal expenses. Instead of letting politicians raid campaign funds for personal use, maybe the people should remove some of the temptation by slashing the amount of campaign funds that can be retained for future years.

Jeremy Hutchinson said, “Everyone was doing it.”  Maybe he was right.

WHO ARE THE SPONSORS OF GREEDY SB258

In his speech to open this year’s Senate proceedings, the new leader of the Senate, President Pro Tempore Jim Hendren (R) – Gravette. said:

The determination to end the culture of greed didn’t last long. Senator Jim Hendren is a cosponsor of the greedy SB258.

These aren’t just any ole legislators. These are supposed to be leaders of the Senate!

Isn’t it interesting Senator Hendren is a cosponsor, and it is his cousin, Jeremy Hutchinson, who is being prosecuted for taking campaign funds as personal income.

In his address to the Senate, Senator Hendren also said.

The change in culture will be led by those sitting here in these chairs this afternoon. It is made by changing our expectations and setting higher standards. It is made by holding ourselves and each other accountable. I know we can do it. I know we will do it.

“Holding ourselves and each other accountable“? Is there no one who will hold these Senators accountable?