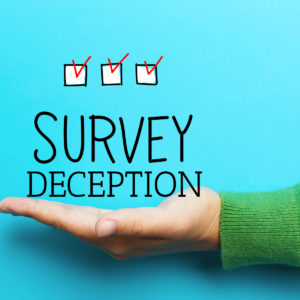 A political survey by Talk Business & Politics-Hendrix College is an unfortunate example of deceptive polling used during a campaign season.

They have conducted many polls. In the past they seem to have done a reasonable job of minimizing bias in their questions.

Bias can be hard to avoid in polls because the questions are short.  But that is not the problem here.  This was intentional bias written into the question.

Talk Business & Politics and Hendrix College each gave themselves a big black eye and jeopardized their credibility by using an intentionally deceptive question. The poll concerned Governor Hutchinson’s “Arkansas Works” program, which is Medicaid Expansion and is part of Obamacare. They surveyed 676 Republican voters:

Q: As you may know, Arkansas instituted a program using federal Medicaid dollars to provide private insurance to low-income Arkansans through health care exchanges. The program is now called “Arkansas Works.” Do you support or oppose the Arkansas Works program?

Despite using deception, Arkansas Works got far less than a majority of support from the Republicans surveyed. We think the results would have been far worse for Governor Hutchinson’s program, but for the misleading question.

The poll is designed to make you think Arkansas is not paying for Governor Hutchinson’s Arkansas Work program.

The key word in crafting the deceptive question is “instituted.” The question says the program was “instituted…. using federal Medicaid dollars.” Saying the program BEGAN with only federal money is true but it is an irrelevant fact used to mislead. Long gone are the days when it was only federal money. Arkansas soon became responsible for paying a percentage of the cost and Arkansas’ percentage is still increasing under the federal law.

The poll could have been easily written saying “Arkansas has a program using federal and state dollars…” but instead what we got was deception.

The issue of who pays is not the only mischaracterization or omission in the question.

The question describes the program as being “for low-income people.” But this will give a false impression.  Because there are already government health programs for the elderly, disabled, and children, the program primarily covers able bodied working age people who do not work or who work very little.

The question could have easily been written to say “low-income people not covered by traditional programs for elderly, disabled, or children.” Of course, we think it would have been more accurate to let the you know the program primarily covers able bodied working age adults who do not work or work very little.

The poll says the program is used to “provide private insurance” to enrollees. There are three things you need to know here. First, enrollees do not get private insurance. The insurance is owned by the state of Arkansas. It is not provided to the enrollees, it is provided to the state (and medical providers and insurance companies). Second, it is still Medicaid coverage and governed by Medicaid rules. Third, administering Medicaid Expansion through insurance cards instead of Medicaid cards was criticized by the U.S. Government Accountability Office (GAO) because it increased costs.[i]

There was no reason for the poll to mention private insurance since how the program is administered is irrelevant unless you want to point out that Arkansas is giving insurance companies a slice of the pie and increasing the cost.

Saying the word “Obamacare” triggers an automatic negative response from many Republicans. So, we can understand why Talk Business & Politics might be reluctant to mention in the question that Arkansas Works is Medicaid Expansion and Medicaid Expansion is part of Obamacare (Patient Protection and Affordable Care Act). On the other hand, since the question was only being asked of Republican voters, don’t you think it is kind of important for them to know the program is part of Obamacare?

The publications of Talk Business & Politics are often informative and well written. Hendrix College has been known for high standards.

We do not know who wrote the intentionally deceptive question. Perhaps someone else wrote it and these two groups just put their name on it without exercising even minimal caution.

We have come to expect better from both groups. It is our hope they will make sure this never happens again. In the meantime, exercise caution.

NOTE: Talk Business and Politics publications partially rely on selling advertisements to Governor Hutchinson’s state agencies, including agency advertisements that do nothing other than promote Governor Asa Hutchinson and his policies.