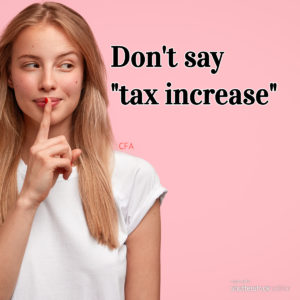 Governor Hutchinson doesn’t want to call it a “tax increase” and thinks “extension” sounds so much nicer.

Although the rate of the tax does not immediately change, once we reach 2023 when the tax is set to expire, the legislation would increase the tax rate from zero percent to ½ percent. That makes it a tax increase.

You only need to ask one question: Will it take more money out of my pocket in the long run? Yes, it does.

Whether you are “For” or “Against” this part of the Governor’s massive tax plan for highways, let’s cut the political speak and call it what it is – a tax increase.