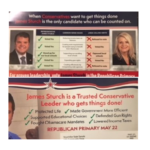 Rep James Sturch put out a mailer attacking Senator Linda Collins-Smith using many false statements, deceptions, and omissions. Before we get into specific issues, lets look at the headings on each page.

Let’s compare with his record:

NOW FOR THE ISSUES IN THE MAILER ….

Protected life. – OMISSION
Sturch fails to mention that during the four years of Senator Linda Collins-Smith’s term representing Senate District 19 she voted for every pro-life law.
He fails to mention that she cosponsored pro-life laws and was chosen to carry and present another one. She was the primary Senate sponsor of HB1424 of 2015 “Parental Involvement Enhancement Act” and cosponsored SB53 and HB1077 of 2015 “To Regulate The Use Of Certain Drugs Used To Induce An Abortion.” Although she was not a cosponsor of HB1394 of 2015 she was chosen to carry the bill in the Senate and present it. The bill was “To Establish the Abortion-Inducing Drugs Safety Act.”
Senator Collins-Smith has been endorsed by Arkansas Right to Life.

Supported Educational Choice. – HE VOTED AGAINST SCHOOL CHOICE
Sturch voted against HB1222 and spoke against it. It was another one of his flip flops because he had voted for the School Choice bill in committee.

Stood up for our local schools (says opponent did not).  – Vague Statement APPEARS FALSE
We went through 15 pages of 1 to 3 sentence summaries on general education bills looking for such a bill, but we still can’t figure out what he is talking about.  He just threw out a statement without saying what bill. From our research Senator Collins-Smith has a great record of supporting schools

Fought Obamacare Mandates. – FALSE
Obamacare mandates have never been considered by the Arkansas Legislature. Those are Congressional issues.
But Sturch has repeatedly voted “FOR” the optional part of Obamacare, Medicaid Expansion which is now called “Arkansas Works.” The program uses state and federal funds to provide Medicaid coverage for able bodied working age adults when Arkansas is not even adequately helping our disabled citizens.
In the 2014 campaign Linda Collins-Smith promised she would fight Obamacare Medicaid Expansion. She kept her word and has voted against it every time.

Creating work requirements for people trying to benefit from Obamacare. (says voted yes and opponent voted no.) – DECEPTION
Wow what a slip up!  By “Obamacare” he is referring to “Arkansas Works.” He is a supporter of the program and supporters normally try to avoid calling it Obamacare.
The legislation he is referring to is part of the “Arkansas Works” law and Senator Collins-Smith promised you not to vote for pro-Obamacare bills.
In addition, it was not really a work requirement. The requirement can be met without ever working – by applying for some jobs, signing up for some training courses, taking some classes, or doing some volunteering, etc.

Reducing Income taxes on Veterans (says voted yes and opponent refused to vote) – MISLEADING
First, a clarification  – the bill was only for military retirement pay, not all veterans.
Senator Collins-Smith supported the exemption for military retirement pay and there was another bill to do just that.  BUT, the bill that passed and Sturch supported included several tax increases on everyone, including on military retirees. Senator Collins-Smith did not vote for it because it included the tax increases.  Ask a military retiree how he or she feels about politicians like Sturch using them as a pawn to raise other taxes.

Lowered income taxes. – OMISSION
He doesn’t tell you about Senator Collins-Smith. They both voted for the Tax Reform and Relief Act of 2017.[i] Again, on income tax relief for the military retirees she could not vote because of the tax increases.

Defended Gun Rights. – OMISSION
Sounds nice but how? Senator Linda Collins-Smith has a long record of fiercely defending the 2nd Amendment. She was leader of the Senate battle to stop restrictions added to a bill that is now called “enhanced carry.”  For her efforts she was endorsed by the Gun Owners of America and it is rare for them to endorse any candidate. She is also a co-founder of the Spring River Friends of the NRA.

Expanding Gun Rights ( says voted yes and opponent no) – MISLEADING
He is talking about the so called “Enhanced Carry” bill. Senator Collins-Smith fought the many restrictions added to the bill.  She was supported in her fight by many concealed handgun holders and the Arkansas Second Amendment group the Patriots of Act 746 which has over 13,000 Arkansas members. This legislation disguised as enhancement has so many restrictions and requirements that is a land mine of where you can and can’t carry with the license. The new requirement that concealed carry trainers must teach enhanced carry has caused many trainers to quit which greatly reduces the places where you can get training.
After the NRA brokered deal to just get something passed, the new law was quickly amended to add more restrictions.

Creating efficiencies by reorganizing state agencies. (says voted yes and opponent refused to vote) – FALSE
Both Sturch and Senator Linda Collins-Smith voted FOR SB10 and HB1006 of the 3rd Ex Sess. 2016 to promote efficiency and effectiveness in the operations of state government.

Election May 22.  Early voting begins May 7.