“I frequently ask people, ‘What history will we write together?’”– Senator Will Bond 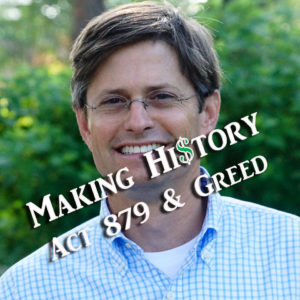 Senator Will Bond (D- Jacksonville) announced he will not run for reelection in 2020. His announcement on Facebook includes a statement that should serve as a good guide for any public servant. He said, “I frequently ask people, ‘What history will we write together?’” Bond and the other members of the Arkansas Senate make history as they write laws that could stay on the books for decades or perhaps centuries.

Senator Bond forgot all about history and his legacy when he sponsored Act 879 of 2019. Senator, is this law the history you want to be remembered for?  The legislation qualifies for the Hall of Fame For Deception and Greed.

Deceptive? If you only read the title of the bill, it appears to be a good bill. “An Act To Increase The Penalty For Taking Campaign Funds As Personal Income…” But that part is insignificant compared to the remainder of the bill.

The legislation cannot be seen as anything other than a direct response to Senator Jeremy Hutchinson being indicted for a felony stemming from converting campaign funds to his personal use. Hutchinson recently pled guilty to that felony and to other felonies.

If Bond’s law had been in effect when Senator Hutchinson was taking campaign funds and using it on his girlfriend, Hutchinson could have avoided his legal problems on this conduct by funneling the same amount of money in to his bank account to defray expenses for “officeholder activities” and then claiming it as a business expense.

Bond wasn’t able to save the money-grubbing Senator Hutchinson, but Bond’s law will save greedy colleagues from the same fate.

And where will the surplus campaign money come from?  Expect to see lobbyists host more fundraisers for incumbents to help them live high on the hog.

What history will we write TOGETHER?

Senator Will Bond did not pass this atrocious legislation all by himself. Was it even his idea or was he just the front guy?

The bill was passed by 33 of the 35 Senators and 88 of the 100 Representatives. They and the Governor all are to blame.

If you tell your Senator and Representative you are ashamed of them for supporting this grab fest here is what they will likely tell you. “I didn’t know that was in the bill. We need to look at fixing it but we can’t do anything about it until 2021.” DON’T ACCEPT THAT AS AN ANSWER.  The Arkansas Constitution purposely allows them to file such a bill (non-appropriation bills) in the 2020 Fiscal Session. It only takes a 2/3rds resolution of each house to allow the bill to be introduced.

You need to know where your legislator stands ….. for greed or for the people.

Because the 2020 Fiscal Session will occur after the next primary election, you need to demand that your legislator support the legislation by being a sponsor or cosponsor of a bill to repeal the use of campaign funds for officeholder expenses AND to make the bill public BEFORE THE BEGINNING OF THE FILING PERIOD FOR FILING AS A CANDIDATE.

If you live in Senator Bond’s district tell him, “Lets write a better history together by you repealing this mess before you leave office.”

The history of officeholder expenses in Arkansas demonstrates how outrageous this grab fest truly is.  Stay tuned for a future article on the shameful hi$tory.