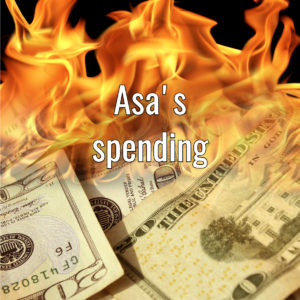 In August, Governor Asa Hutchinson ordered the Department of Human Services (DHS) to move forward to award a new contract for information technology services despite the objections of a majority of the Senators on the Arkansas Legislative Council (ALC). Asa pushed forward to award a huge contract to Deloitte Consulting, who bid $75.3 million over three years, instead of the bid by the current contractor, Northrop Grumman, of $54.4 million.

Why spend $20.9 million more to hire the highest bidder? The supposed “good reason” for spending so much more was based on an arbitrary formula used by state employees. The formula used by the Governor’s administration minimized the importance of cost by making cost only 20% of the contract evaluation.

According to Jeffrey Dean, the chief information officer of DHS, making cost only 20% to 25% of the evaluation is standard among states.  Does that justify spending tens of millions more, or does it reflect an attitude on spending that has gotten so many other states into financial trouble?

Sen. Jimmy Hickey, R-Texarkana, who was described as the leading critic of the contract, objected to the procurement process. “I’m not going to be involved in voting for something like that,” Hickey said. “This [procurement] process down here is flawed.”[i]

Sen. Alan Clark, R-Lonsdale, said, “What has come up here is we have a badly flawed system” that didn’t factor in cost enough in the bidding process.”[ii]

One might think a Republican Governor would have been more cautious about spending. Not this Governor. By minimizing the importance of the cost of the contract, Asa’s administration also minimized the importance of Arkansas’ current financial condition. The Governor’s budget is unsteady and the Governor is on a quest for more taxes to grow government.

In moving forward with the contract, Asa was asserting the power of the Executive Branch to execute the laws versus the Legislative Branch’s authority to make laws. The basis of this position is the Separation of Powers clause found in Article 4 of the Arkansas Constitution.[iii]

Yet, even Democrat Senator Joyce Elliott expressed frustration with the Governor ignoring the legislature to spend more money.

… Sen. Joyce Elliott, D-Little Rock, said, “No vendor should operate under the notion that this body is obligated to say yes. “I really object to the notion that because we have done this, this and this, we have to say yes. Otherwise, why don’t we just not meet, because the whole purpose is for us to have a voice,” …. “I don’t think it is right to suggest that once it gets here, it is a done deal.”[iv]

Spending problem? Revenue problem? Or something else?

When Asa had to cut the state budget a few months ago he described the problem as a revenue problem. He said, “It is a miss on revenue and not a miss on spending.”

Senator Bryan King disagreed saying: “Hutchinson has spent too much money and should cut expenses for the state’s Medicaid program, King said. People always say there is a revenue shortfall instead of a spending problem “when they get into financial trouble,” King said.[vi]

Instead of calling it a “revenue problem” or a “spending problem” perhaps the most accurate description is…. We have an “ASA PROBLEM.”

Have you contacted your state Senator and state Representative to ask them to rein in Asa’s spending?

The powers of the government of the State of Arkansas shall be divided into three distinct departments, each of them to be confided to a separate body of magistracy, to-wit: Those which are legislative, to one, those which are executive, to another, and those which are judicial, to another.

No person or collection of persons, being of one of these departments, shall exercise any power belonging to either of the others, except in the instances hereinafter expressly directed or permitted.