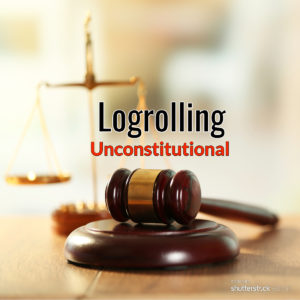 Issue #1 has been ruled unconstitutional. Votes for and against won’t be counted.

It included several separate subjects: a limit on punitive damages, the waiver of the right to jury trial, taking away power over many court rules from the Supreme Court and giving it to the legislature, and a limit on attorney fees.

Having separate issues in one amendment was declared a violation because the legislature is limited to proposing three amendments.

Putting separate issues into one piece of legislation is called “logrolling.”  Logrolling is a deceptive tactic and the Arkansas Constitution tries to prevent the practice.  The constitution even requires Arkansas budget bills to be on just a single subject,[i] which means Arkansas considers many separate budget bills instead of one gigantic ominous budget bill.

Logrolling deceptive? Yes. You only need to look at the 2014 “ethics” amendment as an example.  The legislature proposed an ethics amendment but included for itself longer term limits and a mechanism to get much higher salaries. It is highly unlikely gutting the term limits law would have passed if it had been a separate ballot issue. Also, the raising the salaries of politicians would have faced an uphill battle if it had been a separate issue.

First term state Senator Trent Garner was quick to threaten retaliation against the Arkansas Supreme Court for ruling against Issue #1. He said:

“There will be consequences, starting with their budget next week.”

While he may be disappointed Issue #1 was invalidated, defending logrolling is a defense of deception.

Even some insiders who supported Issue #1 thought it likely the people would reject the amendment at the polls. If so, did it matter whether it was thrown out by the court or rejected by the people? Yes. The court’s ruling sends a message to the legislature to quit using the deception of logrolling.  That is a victory for the people.

Except as provided in Arkansas Constitution, Article 19, § 31, the general appropriation bill shall embrace nothing but appropriations for the ordinary expenses of the executive, legislative and judicial departments of the State; all other appropriations shall be made by separate bills, each embracing but one subject. [As amended by Const. Amend. 94.]