The Tax Task Force met again on June 20 and June 21 to further study tax proposals and ideas for reform before the 2019 legislative session. A report of recommendations is due to Gov. Asa Hutchinson and the General Assembly by September 1.

Part of the two-day meeting included presentations on how to have a net reduction of $200 million in tax cuts.[i][ii]Nicole Kaeding from the Tax Foundation also presented an excise tax report and recommended “Arkansas should consider raising the state’s gas tax to better fund transportation needs”.[iii] 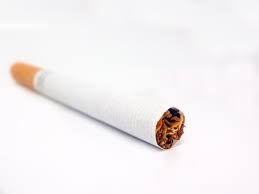 Also, part of this two-day meeting included discussion on the idea of raising the cigarette tax in order to make tax reductions elsewhere. Currently, cigarettes are taxed at $1.15 per pack. This rate places Arkansas as the second highest in the region behind Texas (who does not have a state income tax).[iv]

A presentation from the American Cancer Society’s Cancer Action Network recommended raising the cigarette tax up to $1.50 per pack which would increase taxes by $121 million.[v]Their argument was that raising the tax would reduce tobacco use and decrease health costs.

In response to this recommendation to this proposal, Task Force Co-Chair and Gov. Asa Hutchinson’s nephew, Jim Hendren, told Michael Wickline of the Arkansas Democrat Gazette that “We are not here to raise taxes and that’s obviously what his proposal does. But if it makes sense to tax that item more because of the health care costs and reduce them somewhere else, that is a legitimate reform proposal.”[vi]

The next day, the Tax Task Force voted to further study raising the cigarette tax to $1.30 per pack, a $0.15 per pack increase.[vii][viii]

When Conduit News tweeted out an article from the Arkansas Democrat Gazette about the cigarette tax increase being discussed, the Tax Foundation’s Nicole Kaeding and Senator Jim Hendren simultaneously took to Twitter to state this was not true. 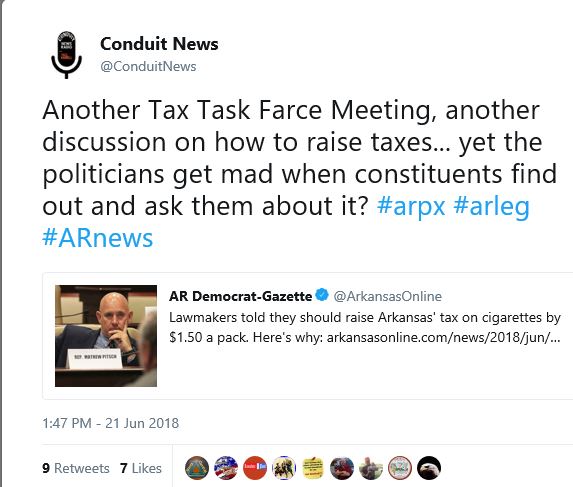 Senator Hendren called the article with direct quotes from him “Fake News” and then declared it wasn’t in fact an article from the Democrat Gazette. 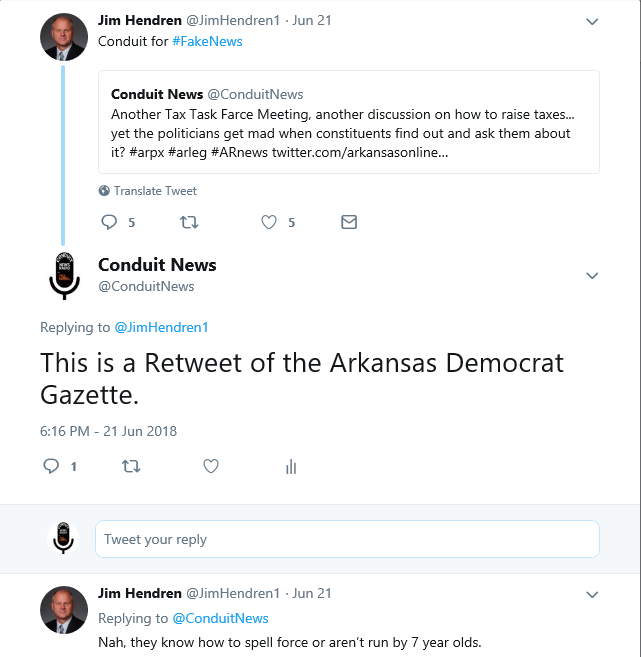 Nicole Kaeding emphatically rejected this Retweet and commentary and that it was “not what happened at all” and that the cigarette tax increase “wasn’t proposed.” 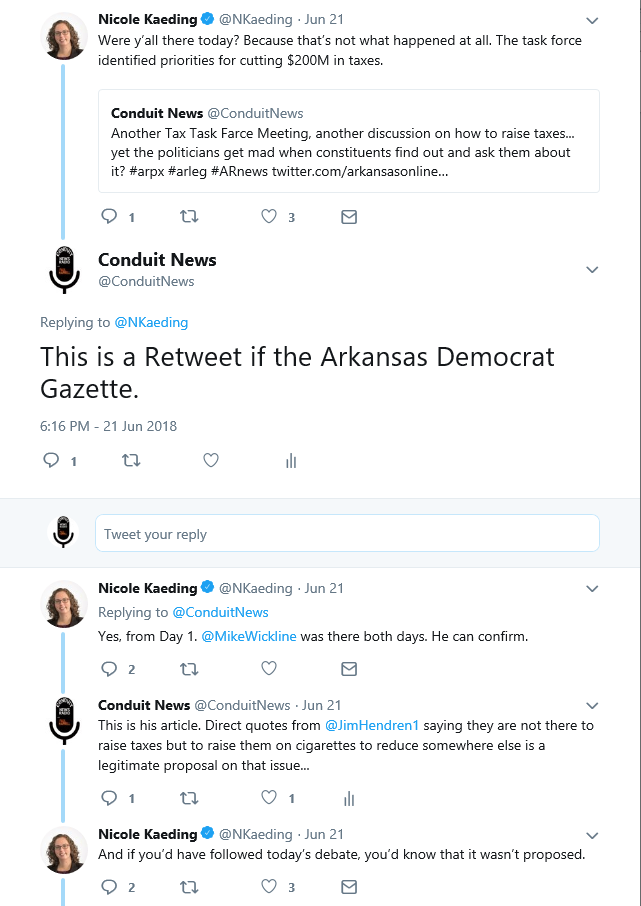 Then, Conduit News responded with an article detailing the exact proposal from that day which included a proposal to further study raising the cigarette tax increase and even had a quote FROM Kaeding on her opposition to this increase. Kaeding then backed up and states she never said there was not a proposal to raise the cigarette tax, but just not to raise it to $1.50 as was pitched on Day 1 of the meetings. 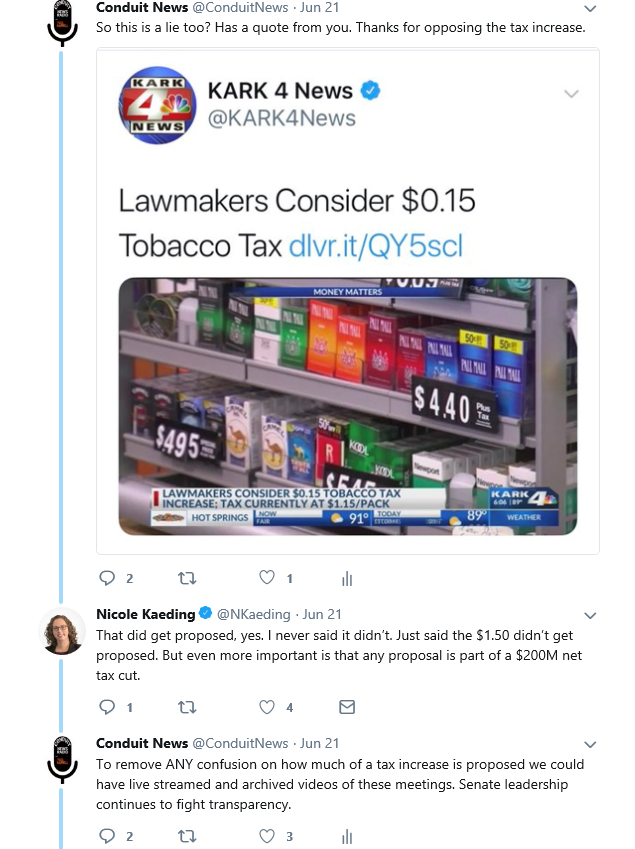 So, to recap, Conduit News retweeted a news article about raising the cigarette tax. Senator Jim Hendren and Nicole Kaeding emphatically rejected that ever happened. Then Conduit News shared with them articles in which they were quoted on their position on the cigarette tax increase issue. Wow!

And to be clear, the Tax Task Force voted to further study and get information about raising the cigarette tax from the current rate of $1.15 per pack to $1.30 per pack, a $0.15 increase.

Paul Harrell broke down this exchange in a segment at the end of last week on Conduit News Radio.

However, instead of raising a cigarette tax, the legislature could have rejected Senator Hendren’s SB5 of the 2017 special session. If you remember, that bill raided the Healthy Century Trust Fund to the tune of $105 million of tobacco settlement funds. That fund was to be used by the “State of Arkansas and its programs, and other projects related to health care services, health education, and health-related research.”[x]

As is common practice at the Marble Palace, the legislature now seems to be in the position to raise taxes to fund projects that they previously had money for but instead prioritized elsewhere instead of using it for its intended purpose.

[ix]NOTE: This photograph and tweet should have said $0.15 Cigarette Tax Increase and a subsequent tweet from KARK’s Jessi Turnure clarified this and that there was in fact a cigarette tax increase proposal for further study.