This week Governor Asa Hutchinson put forth his “Seven Elements”[i] on why the Arkansas legislature should continue to expand Medicaid under his “newly” designed seven conservative tweaks.   But as a fiscal conservative, should we continue Medicaid expansion?   The answer is a resounding “No!”  We encourage our legislators to stop now.  Arkansas has had all the Obamacare Medicaid expansion free money it can afford?”  Make no mistake, this optional program that our Governor is promoting IS Obamacare for the state!

If you think we are just holding firm to a worn out position, let the Governor’s own numbers speak for us.

Three Points by the Numbers!

First:  The benefits to Medicaid expansion in Arkansas are behind us.

The key to the Governor’s argument to support the continuation of Medicaid toone-third of the Arkansas population[ii] appears to be found in the last line of his chart used in his speech titled “Impact of Arkansas Health Care Independence Program (HCIP) on State Spending.“ [iii]

According to the Governor’s own numbers, he projects a $911.5 million net overall benefit to the Arkansas economy over a period from 2014 through 2023. We note the following taken from his chart as the most compelling points in assessing his program:

The above summary may be helpful.  But specific details from the Governor’s Chart are better understood when examining specific numbers as referenced below:

It is obvious from an examination of these numbers that benefits received during years 2014-2016 are irrelevant to the issues at hand.

The only relevant information when deciding whether to continue to expand Medicaid is—“What do the benefits and costs to Arkansas look like after 2016?”  During the last three years of those noted by our governor, these numbers show benefits after 2020 of $79 million to our state while costing us $692 million.

Others may want to argue that when considering the benefits, we must also include the savings gained to Arkansas by our reducing payments for the vulnerable and more-needy in our state under traditional Medicaid; the savings from uncompensated care; and the added tax revenue from the premium fees charged insurance companies (which are actually paid by the taxpayers as well since the non-profit insurance companies are guaranteed a 20% profit on the gross revenues).   But those claimed off-setting figures in no way mitigate the clear trend downward as we struggle to support one million people on the government life-boat.

From the Governor’s own numbers, years 2017 forward chart an undeniably dangerous fiscal future for Arkansas (as well as for our Federal government.)  Clearly the benefits to this program are behind us.

Second:  HCIP endangers Medicaid for our most vulnerable and helpless while supporting others.

From the column of totals from the Governor’s full chart referenced above, we observe the following:

Third:  A policy which continue to expand Medicaid does not pass the CFC Economic Freedom Filter test.

Conduit for Commerce is not supportive of the Governor’s position to continue Medicaid expansion due to three simple facts regarding his proposal: 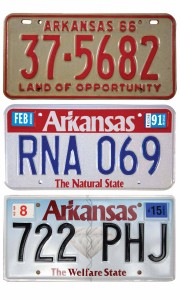 Governor Hutchinson believes it is more beneficial to Arkansans over a ten year period to retain 220,000 to 250,000 able-bodied non-working Arkansans from ages 20 to 65 on welfare for each of those ten years.   We respectfully disagree.

Using Governor Hutchinson’s own numbers, Arkansas should not pursue the continuation of Medicaid expansion after 2016.  To do otherwise will solidly entrench at least 250,000 able-bodied Arkansans into a welfare system they will have every reason to expect must continue….no matter how unsustainable by the taxpayers of Arkansas.

It is our belief that this continued policy of Obamacare Medicaid expansion will permanently move us away from our hopes of returning to a Land of Opportunity and permanently crown us:  “Arkansas–the Welfare State.”

[i] See attachment –Governor Asa Hutchinson handouts to his speech August 19, 2015 regarding HCIP

[ii] Arkansas has a total population of 3 million people with one million now enrolled on Medicaid since the 2014 HCIP expansion according to numbers of enrollment reported by DHS.