On November 5, CONDUIT NEWS with Paul Harrell reported Governor Asa Hutchinson was in China for meetings with communist Chinese businesses – businesses that have received or may want to receive Arkansas tax dollars as incentives to open a factory in Arkansas. The surprising part of the story was that the Governor’s son Asa Hutchinson III was also on the trip …. representing Chinese clients. In fact, the Governor’s law firm represents more than one Chinese firm that has received your tax dollars awarded by the Governor. 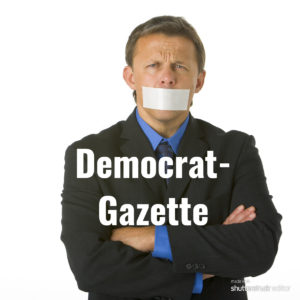 Has the Arkansas Democrat-Gazette covered the story?  We thought at worst the paper would write a fuzzy story glossing over the issue. Twelve days later, Sunday, November 17, the Democrat-Gazette is still ignoring the story of what looks like self-dealing by the Governor to enrich his family and maybe himself.

Not newsworth? Perhaps the Democrat-Gazette has decided a politician’s son making money with his father’s connections is not newsworthy.  No, that can’t be it, because the Democrat-Gazette has published many such stories. Just consider the many times the paper has written about Vice President Joe Biden and his son Hunter Biden concerning Ukrainian deals and Chinese connections.

Just not aware? Perhaps with all the cut backs in staff the paper is just not aware of  the story. No, their columnist, John Brummett was asked  on a talk show about Asa III being on the trip.

Just not room in the paper? Have you read the paper?  Plenty of stories of minor interest are inserted to fill space. Also since the Democrat-Gazette has largely moved to an internet publication it moves some columns into their own little page.

Just likes Asa? Maybe the Democrat-Gazette just likes the Governor and his family as pleasant people and doesn’t care how his dealings look.

Dependence on Governor? And then again, we wonder about the financial pressures on the Democrat-Gazette and publication’s dependence on the good graces of whoever is the Governor:

It is not just the Democrat-Gazette receiving money from state advertising. Other news outlets also benefit from state agencies buying advertising space, which is often nothing more than fluff pieces by the agencies.

Newspapers across the country are struggling, and the Democrat-Gazette is no different.  We want to see them succeed, but we are also concerned about dependence on the state and what else might be omitted by them and other mainstream media outlets.

Speaking of mainstream media news outlets, we want to acknowledge that KATV posted a story about the father and son’s China trip. Wonder if they are now on the “naughty list.”