Back in June Conduit for Action posted an article “A Solution to Arkansas’ Government Spending Problem” highlighting the recent out of control spending by Arkansas state government. You can see that article reprinted below. This week Jeremy Horpedahl and Jacob Bundrick with the Arkansas Center for Research and Economics (ACRE) put out a new research report diving further into the Arkansas state spending numbers. The problem appears even worse than we thought!

You can read the entire report, published by the Mercatus Center at George Mason University, HERE.

Some of the takeaways from the report include:

At the end of the report there are recommendations for how to address Arkansas’ Government Spending problem. One of the recommendations includes mention of a tax-expenditure limit like that in Colorado’s TABOR law that Conduit supports to cap the growth in government spending from year to year. They also recommend more School Choice reform and ending Corporate Welfare as ways to curb state government spending.

Dr. Horpedahl and Jacob Bundrick will be on the Paul Harrell Program on Wednesday, August 16 to discuss the report and findings in more detail. You can watch LIVE online at www.PaulHarrell.com 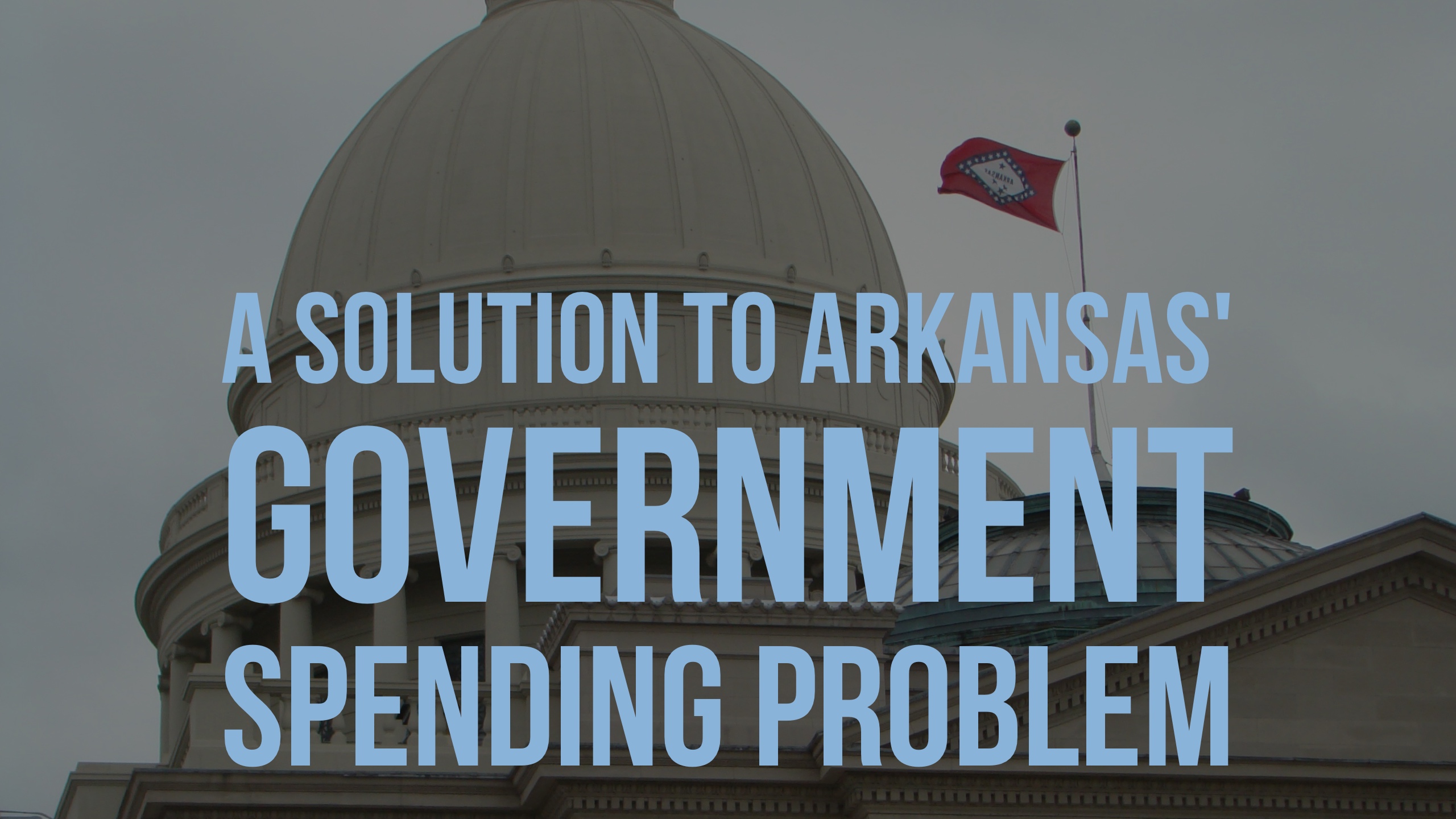 It is true—Arkansas’ government has a spending problem.  This article looks at those facts and offers solutions.  Spending must be addressed before Arkansas can embark upon tax reform or economic growth.  We ask those in power to reflect upon the serious consequences of current spending and consider capping the rate of growth as one solution.

At the recommendation of Governor Asa Hutchinson, the legislature recently passed an all-time high budget.  Only days after the Governor was forced to cut his current budget as well as the next by $113 million.

In spite of record revenues,[1] the state constitution forced the cuts as the budget must balance.  Simply put, we are attempting to spend at a greater pace than our record receipts can cover.   Following the cuts, the Governor assured taxpayers and state employees that the cuts will not reduce essential services, payroll, or bonuses.

You may be thinking–if the government can cut $113 million in its budget without pain, why spend the money in the first place?   Good question!

But you should also ask, why did the Republican-led 91th General Assembly just try to pass (without success) almost $400 million in tax increases?   Could it be that left unrestrained (by the people), our elected leaders in Little Rock will simply keep finding more and spending more of our money?

As pointed out by Governor Hutchinson and others, if Arkansas plans to compete with other states, we need serious reforms!  We are watching those begin with our tax code.  But unless our spending is first brought under control, the only changes we can expect from the highly touted tax reform task force are carefully crafted tax increases.   Before Arkansas can pass tax reform that would boost our economy, Arkansas must implement legislative restraint on its growth in spending—the time has come for a tax-expenditures limit (TEL.)

[T]he only changes we can expect

from the highly touted tax reform

It is time we restrict the rate of growth for Arkansas government from one year to the next.  This would give a pre-determined limit on how much our legislature can spend in any given year compared to the past.  Under a carefully crafted TEL, rather than prioritizing how to spend all they can get their hands on, the legislature would be forced to prioritize and spend only an agreed amount—with the left-over dollars returned to the taxpayers. 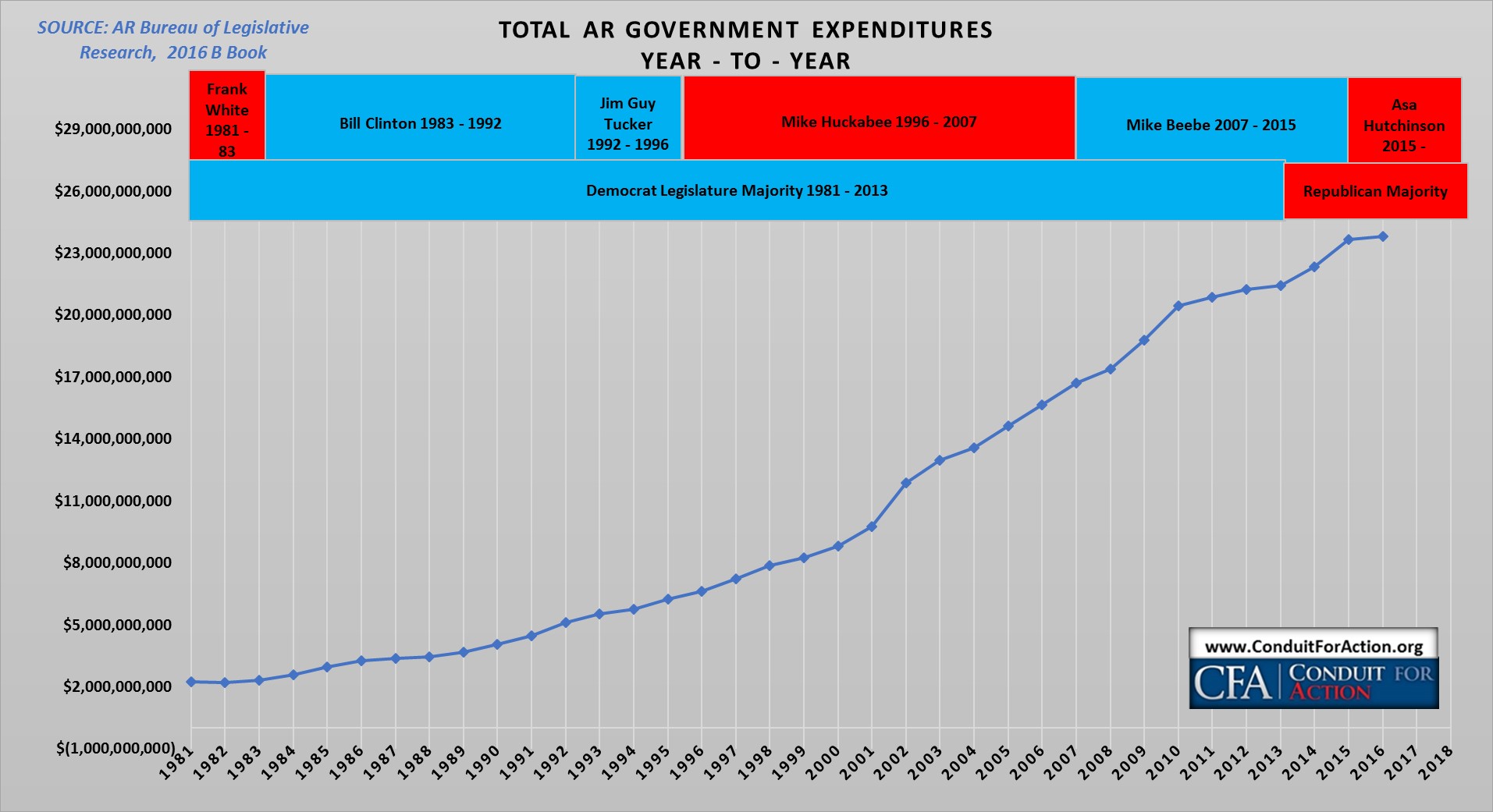 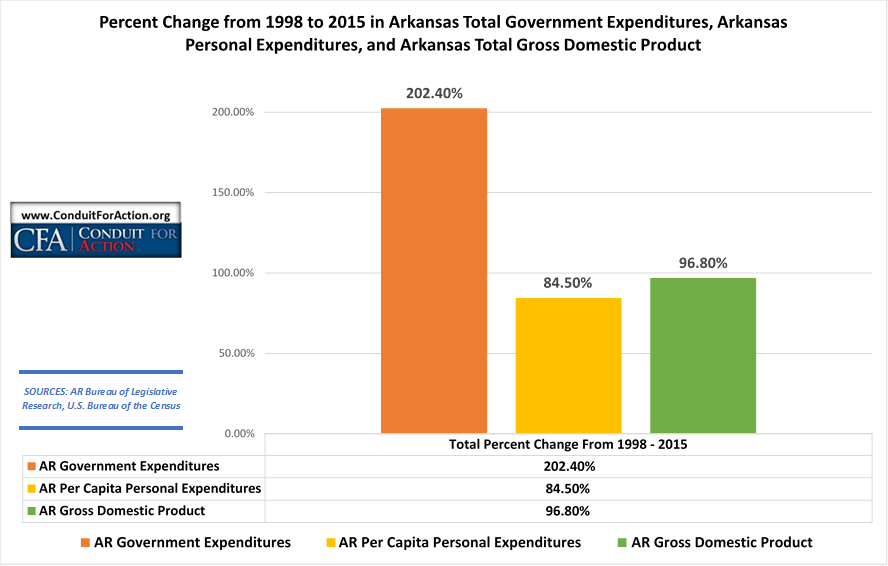 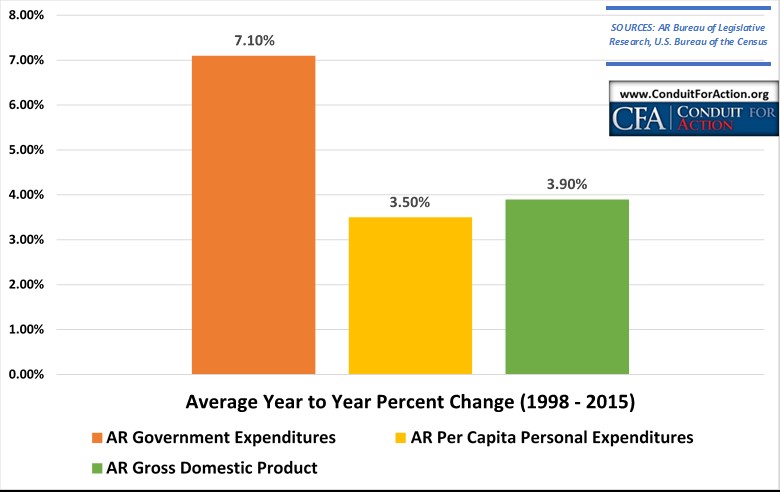 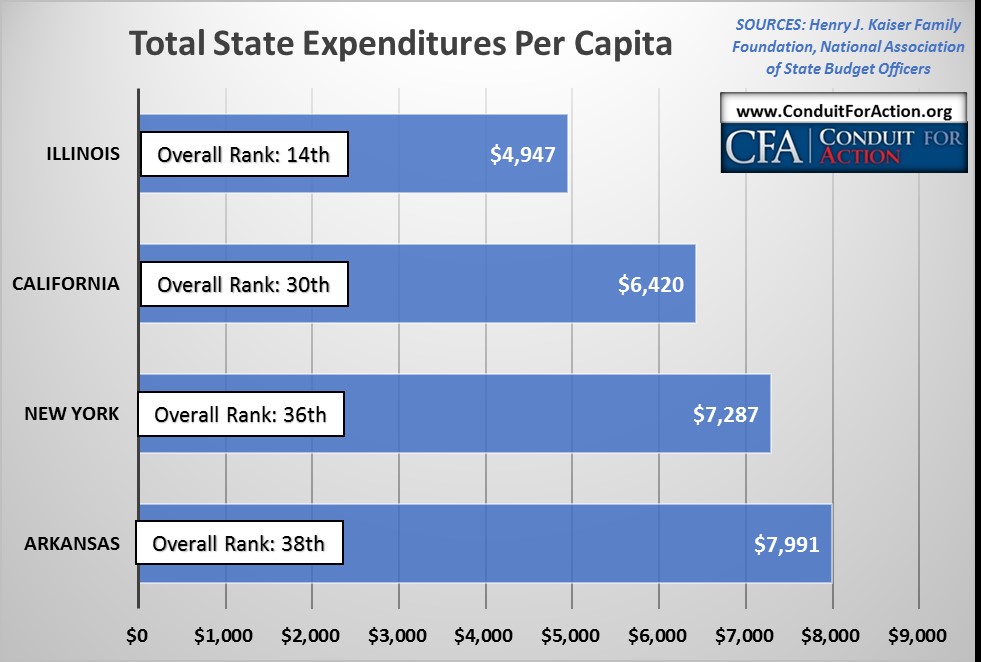 One big step toward a solution to constraining government growth is to simply restrict the amount of money state government can spend.  Rather than allowing it to spend all that comes into the door under a thriving economy, we should place predetermined limits on increases in spending.  This is called a “tax-expenditure limit” (TEL.)  Conduit for Commerce (CFC) has written an article which goes into detail of the importance and positive outcomes of a tax-expenditure limit HERE.  As CFC argues, a responsible tax-expenditure limit would place an expenditure cap equal to the previous year’s expenditures plus inflation and population growth.  Some may not see this as reducing the size and scope of government, but it does place a responsible limit on growth.[6]   A constitutionally imposed TEL allows government expenditures to keep pace with inflation and necessary services for a growing population while constraining expenditures from growing beyond those limits.  Although this method of constraint would allow increases from year to year, the increases would be significantly less than currently exist.  Likewise, this spending cap would not prohibit the legislature from making spending cuts—which would actually reduce the size and scope of government.

Essentially, a tax-expenditure limit (TEL) would be the people telling government how much it can increase spending, and then leaving it to government to prioritize.  This cap in spending would work in Arkansas with the Revenue Stabilization Act; and in the event the legislature decided to tax its citizens a trillion dollars, the spending cap would not allow them to spend it.  An effective TEL as recommended here would include a trigger for a tax refund/rebate returning any tax dollars received over the spending cap back to the taxpayers.

It is time for a solution by the people!  Based on the facts and figures shown in this article from our own Arkansas government websites, Arkansas’ elected officials have a government spending problem.  A responsible tax-expenditure limit written into the state constitution would help contain government growth in Arkansas when the legislature or the governor will not!

[6] In 2016, this would have kept the growth in expenditures to 1.4%. Historically, there has been an increase of 7.1% per year. This shows that a TEL would decrease the growth in government from year to year.