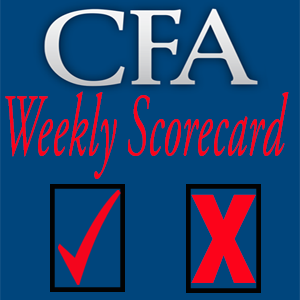 Last week the 92nd General Assembly ran their first substantive bills of the legislative session. Most were noncontroversial bills that gained widespread support among legislators. Some of the highlights of last week from Conduit News:

So far, the most anticipated legislation of the session has not been released – the Governor’s tax reform plan. It is expected that an income tax cut will be put forward with tax increases on internet sales and gasoline. The net impact has not yet been revealed, but it is anticipated when adding in all the tax increases and deducting out the income tax cuts the people may see net a net tax increase.

This bill would expand the scope of practice of optometrists in Arkansas. It would add additional therapies, rehabs, ophthalmic surgery, and laser surgery procedures excluding retinal surgery under the scope of practice. Ophthalmic surgery is defined, and credentialing requirements would be established by the State Board of Optometry for the performing of those surgeries.

By expanding the scope of practice, the bill would increase the choice that a patient has. A patient can choose their optometrist to perform some types of ophthalmic surgeries. The more choice a patient has, the more economic freedom they enjoy.

This bill would allow more competition for those looking to come to Arkansas and work. Competition could lower prices or boost quality of services for consumers, and thus provide more economic freedom to Arkansans. It will decrease dependency on government and instead rely on the free market and people’s choices.

This bill would repeal the licensing requirement for Electrologist. Electrologists are those providing hair removal services. They will no longer have to go through similar education and training requirements that a cosmetologist would have to undergo.

By repealing the licensure requirement, people would be free to engage in this work without a government permission slip. This could provide more choice to consumers and thus more economic freedom. This bill decreases dependency on government to be a regulator, and instead promotes free market choices for regulation.

This bill would repeal a law that required a license for a nursery worker. Currently, a nursery worker must obtain a license if they are growing for sale florist stock, trees, shrubs, vines, cuttings, grafts, scions, buds, fruit pies, and other seeds of fruit and ornamental trees.

By repealing the licensure requirement, people would be free to engage in this work without a government permission slip. This could provide more choice to consumers and thus more economic freedom. This bill decreases dependency on government to be a regulator, and instead promotes free market choices for regulation.

The tax increase would then be distributed 70% to the State Highway Fund, 15% to the County Aid Fund, and 15% to the Municipal Aid Fund.

If extra revenue exists, then $30 million (in the first year) from used car sales tax revenue would go towards highways. In the second year $60 million, third year $90 million, and $120 million in the fourth and subsequent years.

This gas tax increase would grow government by raising taxes on the people and would therefore diminish economic freedom in the state.

In 2018 the Arkansas Supreme Court ruled that the plain reading of the Arkansas Constitution Inwas clear – the state could not be made a defendant in any of her courts. This reinstituted the doctrine of “sovereign immunity” that would prohibit citizens from filing lawsuits against their state government.

SJR2 is a proposed constitutional amendment that would allow the state to provide causes of action under law in which a person COULD sue the state. Absent this type of change the doctrine of sovereign immunity could be used more routinely to block any and all lawsuits against the state.

This proposed constitutional amendment would provide for a more honest and open government providing strong incentives for the state to treat all persons equally and to stay within the constitutional confines found in the Arkansas constitution. This type of measure is also needed to ensure that illegal exaction lawsuits may continue. Illegal exaction lawsuits are brought to prevent government from illegally spending taxpayer money.

2018 saw the culmination of rampant corruption investigations into former Arkansas legislators for bribery and fraud. The best-known incidents included the trial, conviction, and sentencing for former State Senator Jon Woods who got over 18 years in prison for his corruption charges. Investigations continue and indictments are still coming.

This legislation would strip the pension/retirement benefits for public employees who are convicted a felony that is tied to their public position. For example, because former Sen. Jon Woods’ felony convictions were due to his position as a state senator, he would have his pension benefits stripped.

This bill would provide even stronger incentives for public officials and public employees to reject temptations for illegal and corrupt behavior, thus providing a more open and honest government.

SB118 would protect free speech on college campuses in Arkansas. The legislation would address what are commonly called “free speech zones” where colleges try to contain free speech within defined areas of a campus. Free speech zones would be prohibited under the bill. The legislation would prohibit colleges from suppressing free speech including ideas and opinions they find offensive, jarring, conservative, liberal, or otherwise objectionable. Colleges would no longer be able to prohibit organizations and others from getting prior permits in order to exercise their free speech rights. Colleges could not charge security fees based on the content of a speech and could not disinvite a speaker because the college may not like the content or viewpoint of a speaker.

HB1002 is essentially the same as SB140 of 2017 (which failed last session). In 2018, the U.S. Supreme Court upheld similar legislation passed in South Dakota allowing for an internet sales tax under certain conditions. HB1002 is tailored to that same law upheld by the Supreme Court. While it may now be constitutional, passage of a new internet sales tax is by no means required. Like Obamacare Medicaid Expansion, it is up to each state on whether they want to pass a massive tax increase or not.

What you need to know about the Internet Sales tax is that it is a TAX ON YOU, not on out state remote sellers. YOU pay the tax. It also grows government at all levels – state, county, and city. Passage of the law would mean that there would be less money in the pockets of Arkansans and thus the economy, and instead in the coffers of city, county, and state government. The Governor has already assumed that an Internet Sales Tax will pass this session and included the increased revenue into the budget. It is likely that the language in HB1002 may be incorporated into other tax legislation as part of the Governor’s tax reform plan.

The Internet Sales Tax is simply a way to grow government and raise tax revenue. It will decrease economic freedom for Arkansans. Very few elected officials campaigned and were elected on a promise to pas a new internet sales tax on the people of Arkansas. Many even promised the opposite – to not raise any taxes and to lower taxes.

This new requirement is increased regulation on HVACR licensees. While some in the field may advocate for the legislation, some may use it has a sword to stifle out competition. The increase compliance costs would be passed along to consumer through increased prices or lower quality service. Without less competition and increased compliance costs prices will rise and consumers will lose. This reduces economic freedom and leans on government intervention rather than a free marketplace.

According to the state legislative website Roger Lynch is “Self Employed – Heating, Air Conditioning”.