This is an open letter to members of Republican County Committees across the state.

When Governor Asa Hutchinson has to use liberal columnist John Brummett to vouch for the Governor being “plenty Republican enough — plenty conservative enough” that is just embarrassing.

John Brummett is entertaining to read, but he also happens to be left of even most Democrats in the state. This is who Governor Hutchinson chose to repeat his talking points. That speaks volumes about the Governor.

In his internet column, Brummett used the Governor’s talking points to label Conduit for Action as a “right wing organization.”[i]  What they overlook is: Although CFA is not a Republican organization, it uses the Republican Principles and Platform as its playbook for its positions on smaller government, taxes and economic freedom.  The Governor must think the Republican Principles and Platform are “right-wing” documents.

State legislators who stand by the Republican Principles and Platform are the ones who have been most under attack by the Governor. 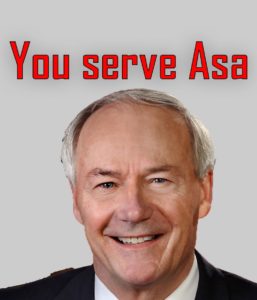 Governor Hutchinson used his administrative assistant, Doug Smith, to try to intimidate some Republican County Committees, demanding they cancel a speaker who would draw a big crowd for the committees’ fundraisers, but who dared to criticize the Governor on an issue.

Despite initial success, Smith’s intimidation didn’t work on the committees in Baxter and Mississippi counties.

That’s when Asa decided it was time to personally go around the state to browbeat Republican County Committee leaders. To help him in some “intimidation lunches” Asa brings anyone he thinks might have leverage over a committee member.

Here is something else Republican County Committees will want to remember. In the 2016 primary, Asa tried to defeat Republican Representative Josh Miller, because Miller is too conservative for Asa’s liking. Asa endorsed and financially supported a primary opponent. Despite Miller winning handily, Asa tried to recruit another opponent for Miller for the 2018 primary, but the person had enough sense to run for a different office.

Asa is still working to defeat and replace solid conservative legislators across the state.