The Americans For Tax Reform urges lawmakers across the country to sign a pledge to oppose and vote against any effort to increase taxes. We applaud their effort. But what has been the result in Arkansas?

You might think there would be a long list of politicians eager to sign the “No Tax Pledge” since the Republican Party is the majority party in Arkansas. WRONG.

Who signed? Lieutenant Governor Tim Griffin, 15 of 100 Representatives, and 8 of 35 Senators. With so few signing, is it any wonder so many taxes were passed this year?

You might think those who signed the pledge would be less likely to vote for taxes. WRONG.

This year, Conduit For Action tracked and opposed seven bills imposing taxes. The Senate passed all seven bills. One of the bills did not come up for a vote in the House of Representatives but they passed  the remaining six. How did the pledge signers do on the tax bills we tracked?

EXCUSES FOR VOTING FOR TAXES

Just Voting To Refer A Tax To The People

One of the bills we tracked was legislation to refer to a vote of the people a one-half percent (0.50%) sales tax to be used for highways and roads. A reporter asked legislators if voting to put a tax on the ballot would break their no tax pledge. Some argued a vote to refer a tax is not the same thing as voting for a tax and shouldn’t be counted against them.

To make that argument they must not have read the pledge before signing. And, it is only one sentence.  Read it for yourself:

You would be hard pressed to claim that voting to put a tax on the ballot is not voting for an “effort to increase taxes.”

By the way, they shouldn’t have bothered with this excuse, no one who voted to refer the sales tax to the people stopped there.  If they voted for this tax, they voted or others as well.

They Were Just “Fees”

Yes, two of the bills call the taxes “fees.” Even if you called them “love offerings,” the increases would still be taxes. One was on your cell phone bill and the other was on water bills.

We looked to see if the Americans For Tax Reform makes a distinction based on what you call the tax. No. They only have a very limited exemption for “user fees” but you can see from their description the bills do not fall in that limited category.

… ATR defines the term ‘user fee’ very narrowly: To qualify as a fee, a charge must fund a specific service, with no excess going into a general fund; the charge must be paid only by those who use that specific government service; and individuals must have the choice whether to purchase the service from government (and thus pay the fee) or to purchase the service from a private business. Excise taxes, sales taxes or taxes levied on businesses to pay for government regulation are not user fees.[ii]

Signing the pledge did not keep most from voting for multiple taxes. And, on the flip side, a few were anti-tax despite not signing a pledge.

A review of the bills we tracked shows that in addition to Representative Josh Miller and Representative Clint Penzo, the following Representatives did not vote for any of the taxes we tracked, even though they did not take the no tax pledge: Julie Mayberry (R – Hensley), Austin McCollum (R – Bentonville), John Payton (R – Wilburn), and Richard Womack (R – Arkadelphia). Thank you!

Attached are charts showing how all the legislators voted on the taxes we tracked. We included a column showing whether they signed the pledge. The charts let you see how who signed the “No Tax Pledge” and how they voted. As you look at the chart also remember all legislators with an “R” by their name are from the party that says one of its principles is: – Lower taxes to produce economic growth.

WHERE YOU COME IN

Your first reaction may be… run all the tax and spend politicians out of office. But, many tax and spin legislators have no opponent and will be reelected. Among Republican incumbents with an opponent, most have an opponent who is  further to the left.

For many Arkansans, the only option for change in 2021 is to nag legislators to do what you elected them to do.  They need to hear from you CONSTANTLY, especially when they are in session at the marble palace in Little Rock. 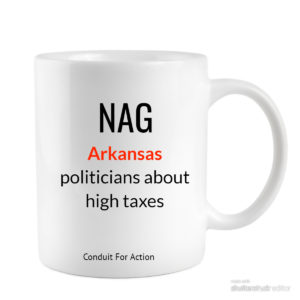 If you have had a teenager in your house you know most teenagers would never have clean socks. unless you nagged them to pick them up and take them to the laundry. Nag your legislator about lowering Arkansas’ high tax burden.

If a tax and spend politician say “Oh, we passed an income tax cut,” tell them “You started off in the right direction but then you set us back by passing other taxes and you spent more tax money without ever trimming excess from the state budget.”

[i] Lieutenant Governor Tim Griffin said: “Highways should always be a top priority and deserve a long-term strategy that provides robust and reliable funding without raising taxes by using savings from government transformation and, like 34 other states, dedicating a portion of state general revenue to fund them,” he said. “I believe we need to address challenges like this with reform first, not tax increases.” (emphasis added) https://www.arkansasonline.com/news/2019/jan/22/no-tax-increase-pledge-hits-state-highw/