With Arkansas’ combined state and local sales tax rate being near the worst in the nation in 2018, the 2019 Governor and legislature had an opportunity to reduce sales tax rates in the 2019 legislative session but chose not to. 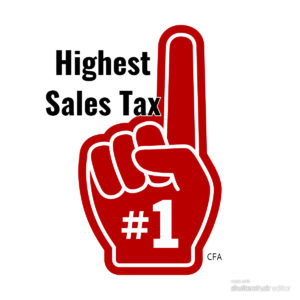 For Arkansas politicians, misery loves company, but our Tennessee neighbors are NOT in the same sinking ship with us. Tennessee taxpayers do NOT have to pay an income tax on normal wages and their remaining special tax on interest and dividends has been repealed effective 2022.[ii]

Instead of our politicians giving Arkansans relief on sales taxes during the 2019 legislative session, the Governor and legislature looked for ways to collect more sales tax from you and me.

Second, the legislature with the support of the Governor passed a proposal to put on the ballot a constitutional amendment to impose a permanent ½ % sales tax dedicated to highways and roads.  They want to impose the new tax after an existing tax of the same rate expires.

And, if 2018 had not been an election year for the office of Governor we might also be paying the full sales tax rate on groceries.  When the legislative task force on taxes considered the idea of increasing the sales tax on groceries to the full rate, Governor Asa Hutchinson, remained neutral … until after all the other candidates announced they opposed the idea.

If Arkansas’ sales taxes are the worst, what does that say about Arkansas’ political leaders?