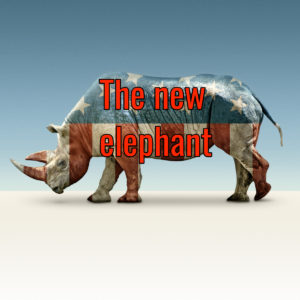 The change in principles from the 2014 to the 2016 Arkansas Republican Platform is much broader than omitting mention of “limited government.” The ten principles of the Arkansas Republican Party are gone.  “Limited government” and “the power of faith in God” have been omitted.  The other eight principles are gone as well, but their words are used in sentences in the preamble. In some instances, the words have little or no meaning and provide no guidance.

The ten principles were replaced in the 2016 platform with five principles, that have little in common with the previous list.

If you are a conservative Republican you should look at the changes and ask, “How does the change in focus affect my party?”

Prior to August 2016, one of the ten principles read: “INDIVIDUAL FREEDOM AND LIBERTY SECURED BY A LIMITED GOVERNMENT.” The words “secured by a limited government” have been omitted.

As a voter what do you think of when you hear “limited government”?  Most likely you think government should be as small as possible because as government grows it regulates more of the economy and restricts your freedoms. Such an understanding doesn’t fit with the current leadership in Arkansas government.

The current version of the platform still uses the phrase “individual freedom and liberty” but it is just words used in a sentence. Why completely delete the principle of limited government? The change certainly fits the attitude of the big government leadership in Arkansas.

One of the Hutchinson administration’s successful efforts to grow government this year was Act 317 of 2017 which included a huge new system of monitoring and regulating tires from sale to final disposal.  Those who handle used tires must comply with more regulations and permits, and the new program is forcing out of business some who have been processing used tires for reuse in other products. It also included taxes on new and used tires.

THE POWER OF FAITH IN GOD

We won’t go through all the former Republican principles, but here are a few examples of how the platform has changed by deleting principles and just using some of the words in sentences

The 2014 Arkansas Republican Party Platform had as a principle “LOWER TAXES TO PRODUCE ECONOMIC GROWTH.” While the words “lower taxes” are still used in the 2016 platform, the way they are used in a sentence is basically meaningless. The words are only used in the following sentence:

“Without the rights to private property, individual rights are diminished.  As such, we recognize the importance of lower taxes not only to spur economic growth, but to ensure that individuals reap more of the benefits of their hard work.

No longer is “lower taxes” a principle of the Arkansas Republican Party. Instead it is merely “recognized” as something important without ever making lower taxes as a goal. The way is clear to raise taxes without the Republican Party objecting based on their platform.

In the 2017 Governor Hutchinson has worked tirelessly to raise taxes.

The Tax Reform and Relief Legislative Task Force (Act 78 of 2017) was created when some legislators wanted to propose tax cuts not supported by the Governor.  This task force idea placated legislators and put their tax cut ideas off for at least two years.[ii]  In addition, the focus of the task force is not on lowering taxes.  Instead it is looking at shifting tax burdens among taxpayers (called “fairness”). Note: All the members of the task force voted for one or more tax increases in the 2017 legislative session.[iii]”

Would progressive big government Republicans have pushed so many taxes if “lower taxes” had remained a party principle?  Most likely they would have, but now they are able to deflect some conservative criticism by the platform change.

“Individual responsibility and initiative” used to be a principle of the party. Conduit for Action pointed to this principle and other Republican principles as being contrary to Obamacare Medicaid Expansion which gives health insurance to primarily able-bodied working age adults who don’t work. Governor Hutchinson continued the Obamacare program under the name Arkansas Works.

Just a few months after Arkansas Works was passed, “individual responsibility and initiative”was removed as a principle. Now the words are just used in a sentence that makes no policy statement.  It now reads:

We are created equally with Individual freedoms and liberties that, through our own exercise of individual responsibility and initiative, can result in great outcomes independent of government.

The Arkansas Republican Party Platform used to say one of its principles is “PRIVATE PROPERTY.”  The words “private property” are still mentioned, but not as a principle.  Private property is only mentioned in the passage which says:

“Without the rights to private property, individual rights are diminished.  As such, we recognize the importance of lower taxes not only to spur economic growth, but to ensure that individuals reap more of the benefits of their hard work.

What had been the ten principles of the Arkansas Republican Party were either omitted completely or relegated to merely being words in discussion sentences in the preamble of the 2016 platform.

One thing is clear – establishment Republicans in Arkansas like the changes in the platform as they continue to try to drive out of office their more conservative colleagues.

Now the Establishment Republicans are telling members of the county committees that Republicans shouldn’t criticize other Republicans. “Well, isn’t that special?”

To make it easy for you to see what happened to the ten principles of the Arkansas Republican Party we are including passages from the 2014 and 2016 platforms. Also, you can click on these links to read the full documents. 2014 – 2016. We have also included below what now are supposed to be the five principles.  You can see them in context by clicking on the link for 2016.

We, as members of the Republican Party of Arkansas, believe the Platform expresses the will of the people and provides direction to our elected officials. Therefore, this Platform is our blueprint for government of the people, by the people and for the people based upon the following principles:

The 2016 preamble omits mention of “The Power of Faith in God” and “Limited Government.”  The other eight principles have been incorporated into sentences in the preamble.  Judge for yourself whether the meaning or emphasis has changed. Below are the paragraphs in the 2016 preamble where the former principles are used in a sentence.

The self-evident truths at our nation’s founding are still self-evident today.  We are created equally with Individual freedoms and liberties that, through our own exercise of individual responsibility and initiative, can result in great outcomes independent of government.  As we are endowed with these abilities by God at our creation, we assert the sanctity of human life and affirm that unborn children have a right to live that cannot be infringed.

Without the rights to private property, individual rights are diminished.  As such, we recognize the importance of lower taxes not only to spur economic growth, but to ensure that individuals reap more of the benefits of their hard work.  We strongly believe in the equal and just enforcement of the law, especially as it pertains to an overreaching government threatening private lands, businesses, and inherent freedoms.

Our self-evident rights must always continue to be secured at the personal, state, national, and international levels.  We believe in a strong national defense and honor those men and women who, for the long history of our country, have stood sentry on our behalf and, in some cases, given us their last full measure of devotion.  We also believe in securing our national borders to protect our homeland while still welcoming legal immigrants and visitors.  None of our rights and freedoms, however, can be truly guaranteed without the right to own and bear arms as an individual’s hedge against government and as a means for self-defense in our home, on our property, and of our person.

The vibrancy and vitality of our republican form of government requires three separate and coequal branches as spelled out in both the federal and state constitutions.  Through a robust system of checks and balances, no one branch of government—whether located in Washington, D.C., or Little Rock—should wield more authority than the other two.

* That individual citizens are willing and capable of managing their own affairs without government intervention.
* That the local, state, and national governments must pursue policies designed to encourage individual initiative and induce people to be responsible for their own economic, political, and social well-being.
* The primary function of government is to protect the life, common liberty and property of the governed, to prevent fraud and misinterpretation, and to invoke a common justice.
* That when a function is undertaken by government, it should be performed by that government closest to the people which will provide as much direct control by those affected as reason and wisdom require to assure freedom and liberty to all citizens with justice under the law.
* That our national stability and expansion of the free enterprise system can be best assured by application of the Constitutional principles that unite the American people.

[i] General Revenue Estimated Impacts of the 91st General Assembly, 2017 Regular Session,” in the 2017 Summary of Fiscal Legislation, by the Bureau of Legislative Research