The policies of the Arkansas Republican Party are debated and adopted at the state convention. Representatives of each county committee are sent to the convention and participate in the debate and adoption of the platform.  For many it is the only time they will speak out on party policy.

In some counties there are growing frustrations over some politicians who run as Republicans but ignore the principles of the party. As a result, a few county committees have begun to speak out on some issues. What is the response of Republican politicians? It has been mixed. 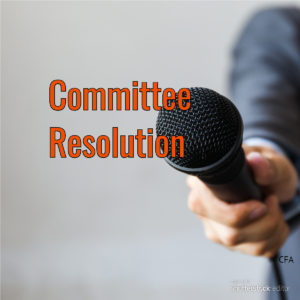 The Jackson County Republican Committee passed a resolution demanding Republican officeholders protect our Second Amendment rights to own and bear arms. The Jackson County resolution of September 24, 2019 tells Republican officeholders to “take every available action to stop all attempts to impose any infringements on our natural right to keep and bear arms”.  The resolution includes a list of specific types of legislation the committee expects officeholders to oppose: 1. Gun confiscation (a.k.a. Red Flag Laws/Extreme Risk Protection Orders); 2. Ban of semi-automatic and “assault style” weapons; 3. Any restriction of high capacity magazines or ammunition; 4. Universal Background Checks; and 5. Gun Buyback Programs

Why did the Jackson County Committee think it necessary to pass such a resolution when one of the Arkansas Republican Party principles is “THE PERSONAL RIGHT TO OWN AND BEAR ARMS”? The reality is some Republican politicians ignore much of the Republican platform and principles.

February 21, 2017 the Washington County Republican Committee passed a resolution against an internet sales tax. (An internet sales tax is a tax you pay when you order an item from an out-of-state seller that has no physical connection with Arkansas.)

You might think a resolution on the subject should not be necessary since the party platform includes the principle, “LOWER TAXES TO PRODUCE ECONOMIC DEVELOPMENT.” But again, some ignore the principles.

In 2019, the earlier resolution was largely ignored by the legislators of Washington County. All five Republican Senators rejected the committee’s plea and voted “For” the tax and two of the six Republican Representatives voted “For” the tax.  Several of the Senators were sponsors of the tax bill. See details of the 2017 and 2019 votes in the notes below.[i]

The 2019 tax bill was passed by the Republican majority legislature and Governor Asa Hutchinson quickly signed it.

The non-binding resolution also instructed the state Senators and state House Members representing the county “to do everything within their delegated authority to uphold these principles.”

Why such a resolution? One committee member noted the committee sends money to candidates who do not follow the party platform and said one Republican official has voted 90% of the time with the Democrats. She said if they are not going to vote with the platform at least a majority of the time, why have a platform. Another member noted she and others work their tails off raising money for the party and candidates and there is nothing in the platform that any conservative would object to.

Senator Cooper compared the resolution to the system of the communist Soviet Union where the Party instructed leaders on what actions to take. That is another strange thing to say in our country where joining a political party of like-minded individuals is purely voluntary and where you don’t have to belong to any political party to be elected to office.

Despite Cooper’s opposition to the resolution (and apparently to the party platform having any guidance on his votes) there has been no indication he would want to run as an independent and drop the benefit of being Republican …. benefits without responsibility.

Cooper may be the only one of the Craighead delegation to object to the resolution, but how would the Republican legislators representing your area respond?

Since becoming the majority party, the Republican county committees seem to have given elected Republican officials a pass when voting contrary to the party principles.  Were they just excited about being on the winning side and didn’t want to rock the boat?

Is the honeymoon over? Or, have the three county resolutions merely been rare exceptions where a county committee thinks it should be more than mere cheerleaders and should have a role in defending the party platform and principles?

Only time will tell.

Are you a member of a political party county committee? If so, please tell us what you think your role is as a member. Fundraiser? Recruiter? Cheerleader for anyone wearing the label? Defender of party principles? Policymaker?

The tax was proposed again in 2019 as SB 576 and the tax passed in the Republican majority legislature.  All five Republican Senators whose districts include part of Washington County voted “For” the tax. They are: Senators Bob Ballinger, Cecile Bledsoe, Lance Eads, Jim Hendren, and Bart Hester. Hester was the lead sponsor of the bill and the cosponsors of the bill included Senators Hendren, Ballinger and Eads. The committee did better in the House of Representatives.  Only two of the six Representatives voted for the tax: Representatives Bruce Coleman, and Grant Hodges.