If you subscribe to Conduit for Action, you will remember a recent article which began:

When Governor Asa Hutchinson has to use liberal columnist John Brummett to vouch for the Governor being “plenty Republican enough — plenty conservative enough” that is just embarrassing.

John Brummett is entertaining to read, but he also happens to be left of even most Democrats in the state. This is who Governor Hutchinson chose to repeat his talking points. That speaks volumes about the Governor.

In his internet column, Brummett used the Governor’s talking points to label Conduit for Action as a “right wing organization.”[i] What they overlook is: Although CFA is not a Republican organization, it uses the Republican Principles and Platform as its playbook for its positions on smaller government, taxes and economic freedom.  The Governor must think the Republican Principles and Platform are “right-wing” documents.

The article didn’t address the fact the Governor’s talking points against Conduit for Action were DECEPTIONS. We will remedy that here. 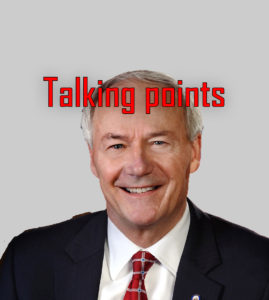 Brummett repeated the Governor’s claim that CFA unfairly labels the Governor as a “tax-raiser” because to balance the budget and give military retirees an income tax break, the Governor included “revenue generation measures” to “offset” the cost of giving the tax break. WRONG!

Arkansas is a high tax state and the cost of Arkansas government is high calculated on a per capita basis.  Yet Governor Hutchinson ignores that, and says we do not have a spending problem – we have a revenue problem.

BOTTOM LINE ON TAX AND SPEND GOVERNOR: The question is not whether Governor Asa Hutchinson is a tax and spend politician. The question is: Did he see any new tax increase proposal he did not like?

Brummett repeated the Governor’s talking point claiming CFA says the consultant hired by the Tax Reform and Relief Legislative Task Force can’t give an honest assessment because the consultant made some pro-Obama, anti-Trump statement on social media.  WRONG!

(B) Pushed for support of more corporate welfare programs. Instead of lowering taxes on Arkansas businesses this would keep their taxes high to support the giveaways used to pick winners and losers.

(C) Floated the idea of the adoption of a state Earned Income Tax Credit which is denounced by conservatives as a welfare program and supported by liberal groups.

With the consultant beginning his very first Arkansas meeting with these liberal big government ideas, we wanted to know if we should expect more of this liberal view point. We looked at his social media accounts.

His liberal bias is not confined to the presentation he made in Arkansas.  Yes, some of his social media posts were pro-Obama and anti-Trump, but the Governor and his buddy Brummett fail to mention the consultant’s donations to Democrats, and other social media posts that retweets from left wing policy groups, pro Obamacare Medicaid Expansion, anti-Second Amendment, and most importantly, his tax philosophy that “Tax cuts are not the same as tax reform.” In Arkansas, where we have higher taxes than bordering states, that is disappointing.

BOTTOM LINE ON  LIBERAL CONSULTANT: It was the consultant’s liberal big government presentation to the task force that demonstrated his liberal bias on taxes . His social media posts and political donations are just further evidence of the bias he showed at the meeting.  His bias is especially concerning because the focus of the task force is on tax shifting among taxpayers instead of on reducing Arkansas’ high tax burden.

One of talking points the Governor has used on Republican County Committee leaders (but wasn’t included in Brummett’s internet column because it is contrary to Brummett’s agenda) is: CFA doesn’t give me credit for the conservative things I do, like my actions regarding planned parenthood. CROCODILE TEARS!

It is embarrassing when the Governor must rely on liberal columnist, John Brummett, to vouch for him being “plenty Republican enough — plenty conservative enough.” It is even worse that the Governor gave Brummett talking points that are nothing but deceptive statements about the Governor’s conservative critics.