Do you support putting a price on human life?  You will be asked that question in November when you vote on the tort reform amendment on the ballot. Under the amendment there would be a cap on damages that can be awarded in a lawsuit over the death of a loved one – no matter how egregious and how much pain and suffering your loved one endured.

The cap on the value of life is already an issue in some primary races.  One such race is the Republican primary in House District 53, which is in the Jonesboro area. 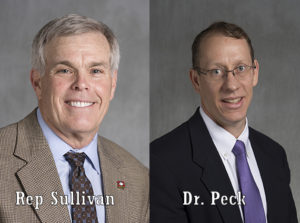 Representative Dan Sullivan (R-Jonesboro) is under attack for voting AGAINST the tort reform amendment proposed by the legislature. A major reason Sullivan refused to vote for the proposed amendment was because he opposes the cap on the value of human life. He says you can’t put a value on life.

Sullivan voted against the amendment despite it being something that would have benefited his industry and Dr. Peck’s profession. Sullivan said he voted against it was the right thing to do for the people. Many think Rep. Sullivan would not have had an opponent but for his opposition to the tort proposal.

Rep. Sullivan said, “Everyone is for tort reform. It’s what the bill says and the details of the bill that make the difference.”

Dr. Cole Peck is the other candidate in the race. His position on the amendment is not so clear. He says he is for tort reform and appears to be for putting a cap on human life except in cases of  obvious gross negligence. He said, “However, I am against capping punitive and non-economic damages when it comes to obvious gross negligence.”  The answer that he would not support a cap in all cases doesn’t  answer whether he still supports the tort amendment which does includes the cap on all human life.

Dr. Peck began by saying you can’t put a price on life, but quickly said yes you can. Dr. Peck’s example was that Medicaid sets a value on what it pays him for a lifesaving procedure for Medicaid patients. His analogy is problematic. The federal government payment to Dr. Peck is NOT a cap on life; it is the value they place on Dr. Peck’s services.

Here is video of their debate that includes the discussion on human life.

Rep. Sullivan says you can’t put a cap on human life. Dr. Peck says you can. What is your opinion?