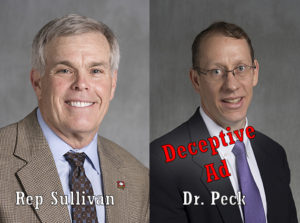 We thought we had already seen the most deceptive campaign mailer of the election.  But as we get closer to May 22 they are getting worse.

It is sad to see Dr. Cole Peck tarnish his reputation by allowing his campaign to put out false and misleading information about his opponent.

Let’s deal with the claims made by Dr. Peck’s campaign against Representative Dan Sullivan: 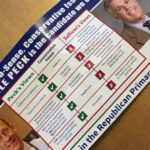 The bill gave military retirees a tax break and then took part of it back in the form of the new taxes.  How did the bill honor other veterans? By increasing their taxes! The legislature should have said “no” to the Trojan horse bill and passed the clean bill with no taxes as Representative Sullivan supported.

Clarification – The bill was not for all veterans, as Dr. Peck implies. It was only for military retirement pay.

Hogwash! This legislation isn’t about frivolous lawsuits. Dr. Peck knows full well what the legislation is about and why Representative Sullivan voted against this bad legislation. They even discussed it in debate.

Representative Sullivan had the integrity to vote against the bad legislation even though his company and Dr. Peck would benefit by it! He stated in debate that he voted against the legislation because it sets a limit on what your life is worth.  It would limit damages for the death of your loved one no matter how much he or she suffered or how egregious the act.  Sullivan also stated in debate he voted against it because it will end up taking away your right to a jury trial in a civil suit. The legislation says it “allows” you to waive your right to a jury trial, but if passed by the people in November expect the real result to be that nursing homes etc. will push you into contracts that make you waive your right to a jury trial in order to receive services.

Claim #4 “Refuses to work with or listen to our schools.” – Deception

This is wild accusation with NOTHING to back it up.  Our review of legislation found that Representative Sullivan has a strong record of supporting schools and he has worked to bring more state financial assistance to help lower the cost of teachers’ insurance.

Claim #5. “His company is under investigation for Medicaid Fraud.” – False

We searched to see if there are any records or news stories to support Peck’s claim. We found NOTHING. So, we called Representative Sullivan and asked him. Sullivan said the charge is false. He said not only is his company not under investigation, he has not even been contacted about even a remote possibility of an investigation. UPDATE: The Office of Medicaid Inspector General and the Office Attorney General Leslie Rutledge have confirmed in writing they have NO investigation of Dan Sullivan or his company.

We hope we do not see any worse mailers than Dr. Peck’s.