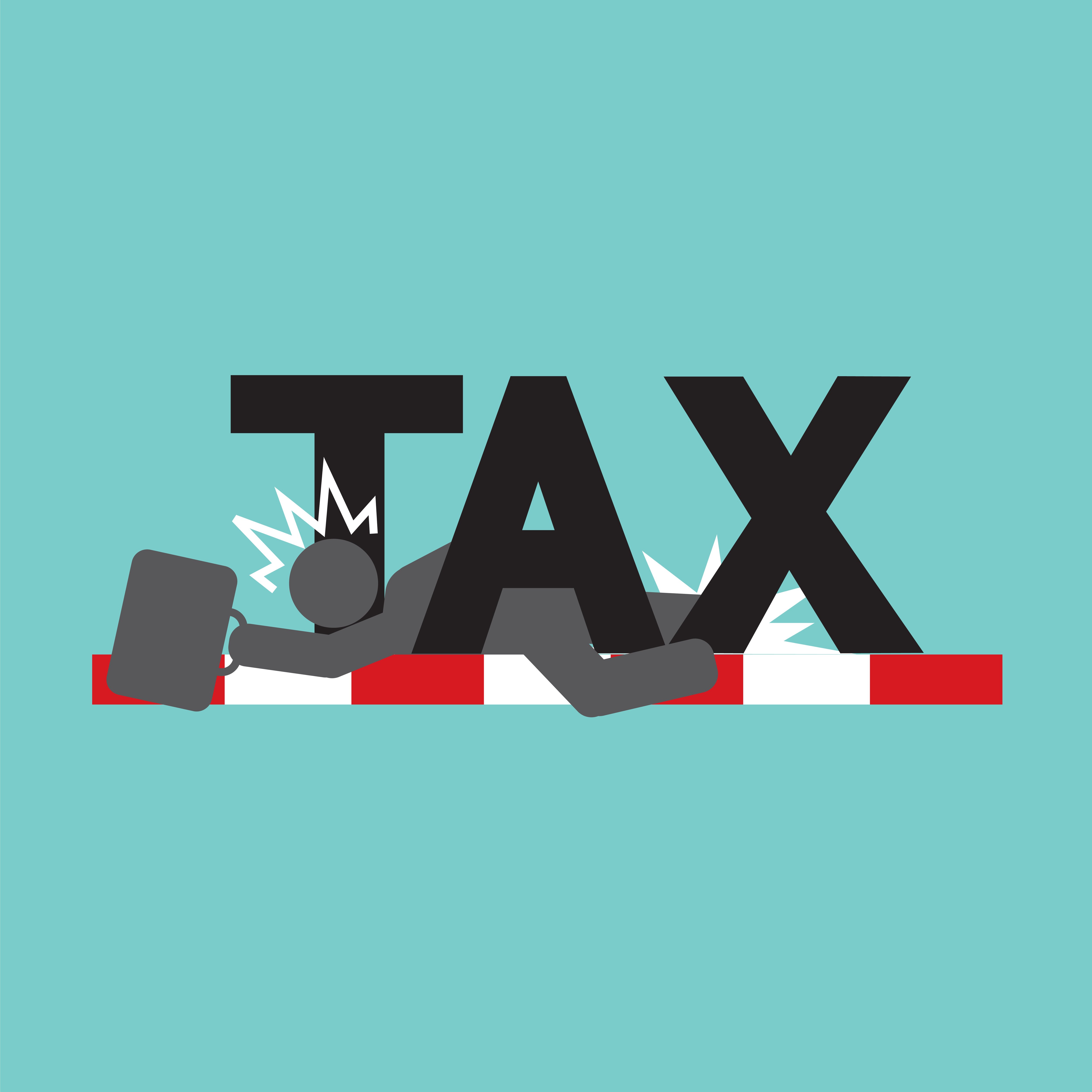 WHEN we read state Senator Jim Hendren’s legislation to create the Arkansas Tax Relief and Reform Task Force, we were disappointed, because the focus was primarily about shifting tax burdens among taxpayers. We had hoped Republicans would have focused on cutting the high tax burden on Arkansans. Keep in mind, Governor Asa Hutchinson refused to support tax relief for military retirement unless the bill included enough new taxes to make the plan “revenue neutral.” Later we learned the plan became an overall tax increase of $5.9 million a year. Senator Jim Hendren, Asa’s nephew, created and chairs the task force and it is designed to repeat his uncle’s plan of tax shifting (revenue neutral) and tax increases for sure.

WHEN the membership of the task force was announced, we were dismayed to see that it is stacked with tax and spend legislators. Almost all task force members voted in 2017 for more than one bill that would raise our taxes.

WHEN the task force hired a consulting firm and it was revealed who would be the project manager, all doubts were erased about the liberal agenda of the task force. The task force used your tax money to hire a raging liberal to guide Arkansas tax policy.

JUST WHO IS THIS RANDALL BAUER?

The task force hired an out-of-state consultant, PFM Group Consulting (PFM) at the hefty price of $312,750.[1]  At the next task force meeting PFM made a presentation and revealed that Randall Bauer would be Project Manager for this consulting job with the task force.[2]

It is important to know about the lead consultant whose job it is to reform the Arkansas tax code which will impact millions of Arkansans. Mr. Bauer’s biography shows he was a longtime Iowa bureaucrat before moving into his more lucrative role as a consultant paid for with taxpayer money.

Let’s take a closer look at Randall Bauer. What can we glean from Mr. Bauer’s recent social media posts, past political donations, and his PowerPoint presentation to the task force? From these, it is clear Mr. Bauer is a raging liberal with little interest in shrinking the size and scope of government. Sadly, this makes Mr. Bauer a perfect choice for the big government agenda of Chairman Jim Hendren and his uncle, Governor Asa Hutchinson.

One place we can look for Mr. Bauer’s views is Twitter. Mr. Bauer’s twitter username is @RandyBauer. There we can very quickly see Mr. Bauer’s political views on full display for the public, including to those making the decision to hire Mr. Bauer (Chairman Jim Hendren and other task force members).

First, we see a recent tweet from Mr. Bauer claiming that Obama is light and Trump is dark.

Next, you see a re-tweet of Michael Bloomberg encouraging people to donate to his Anti-2nd Amendment groups Everytown and Moms Demand Action. Moms Demand Action is the same liberal group Governor Asa Hutchinson met with and took photos with during the recent legislative session. 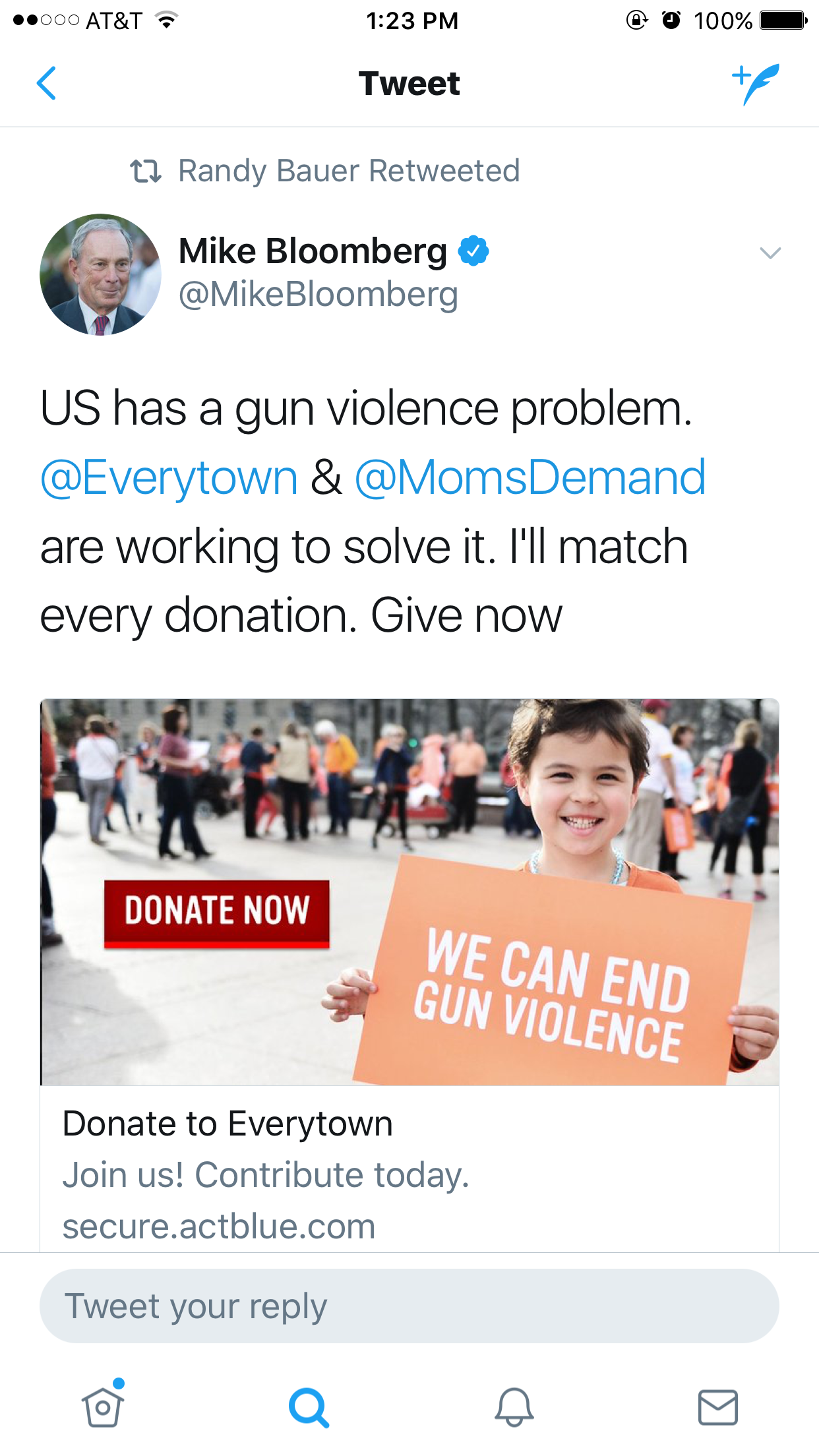 You also see Re-Tweets of the Brookings Institution, a liberal, anti-capitalism organization. Mr. Bauer routinely tweets out their policy information, seeming to signal support and distribution of their policy ideas. 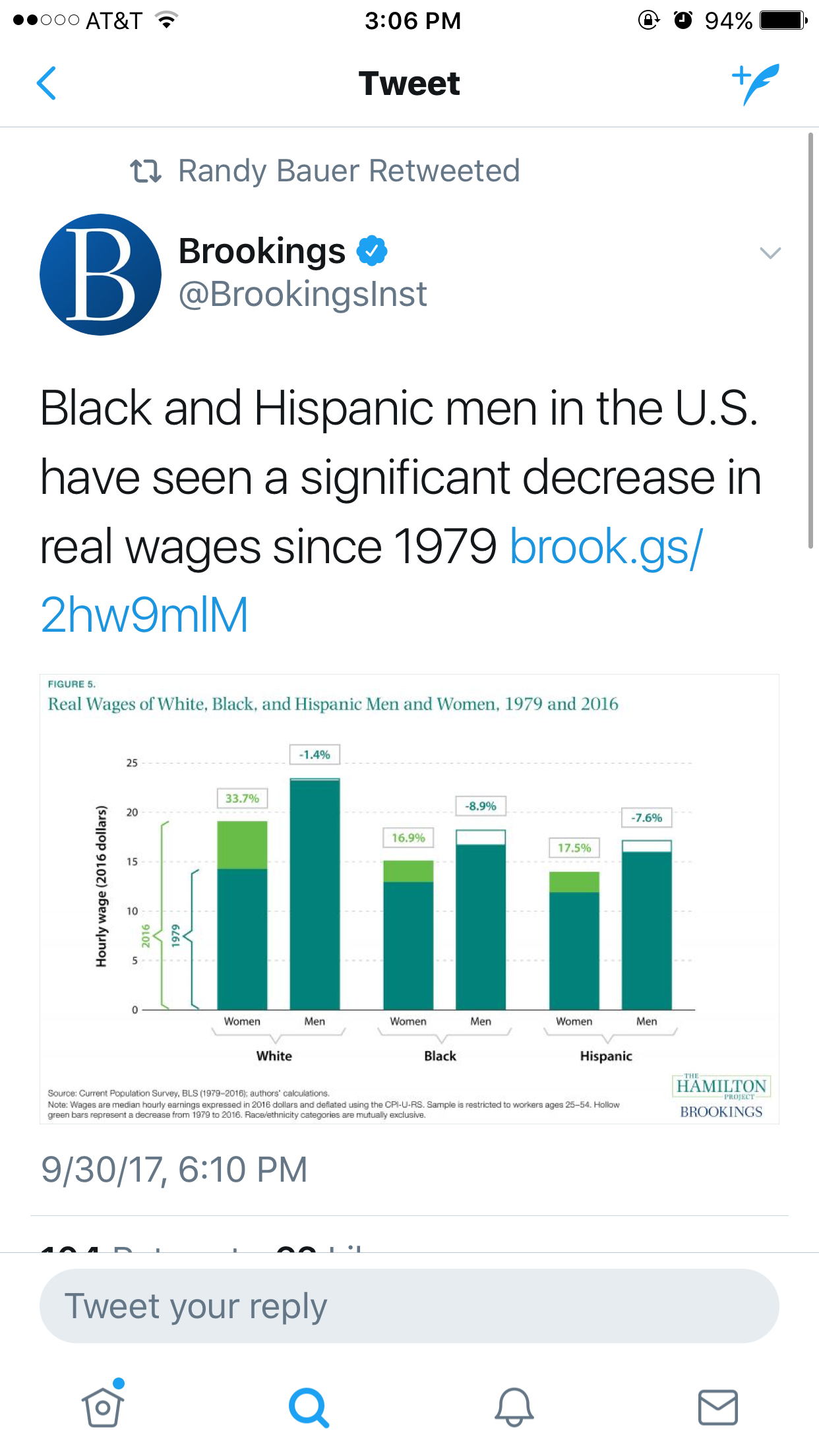 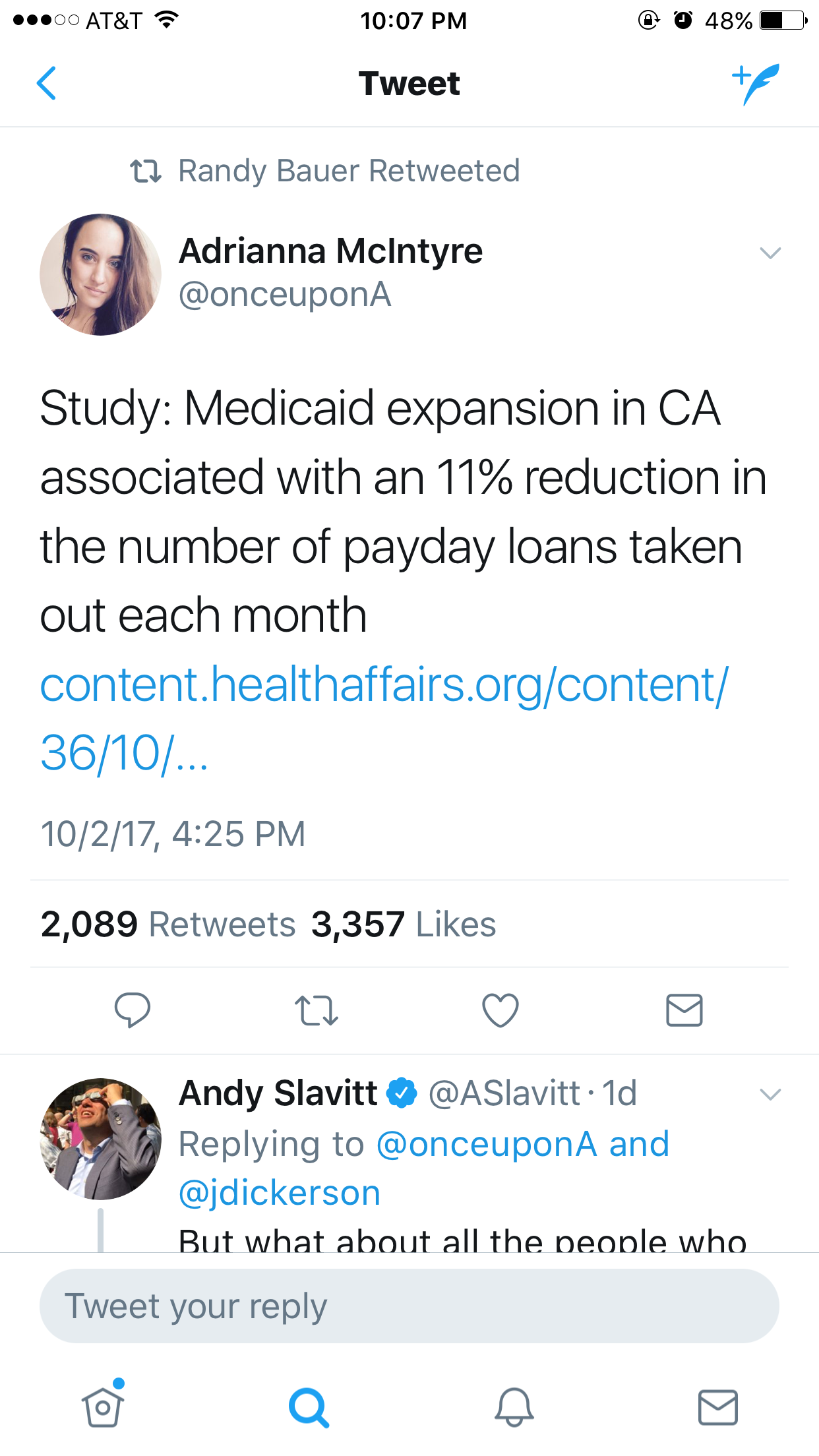 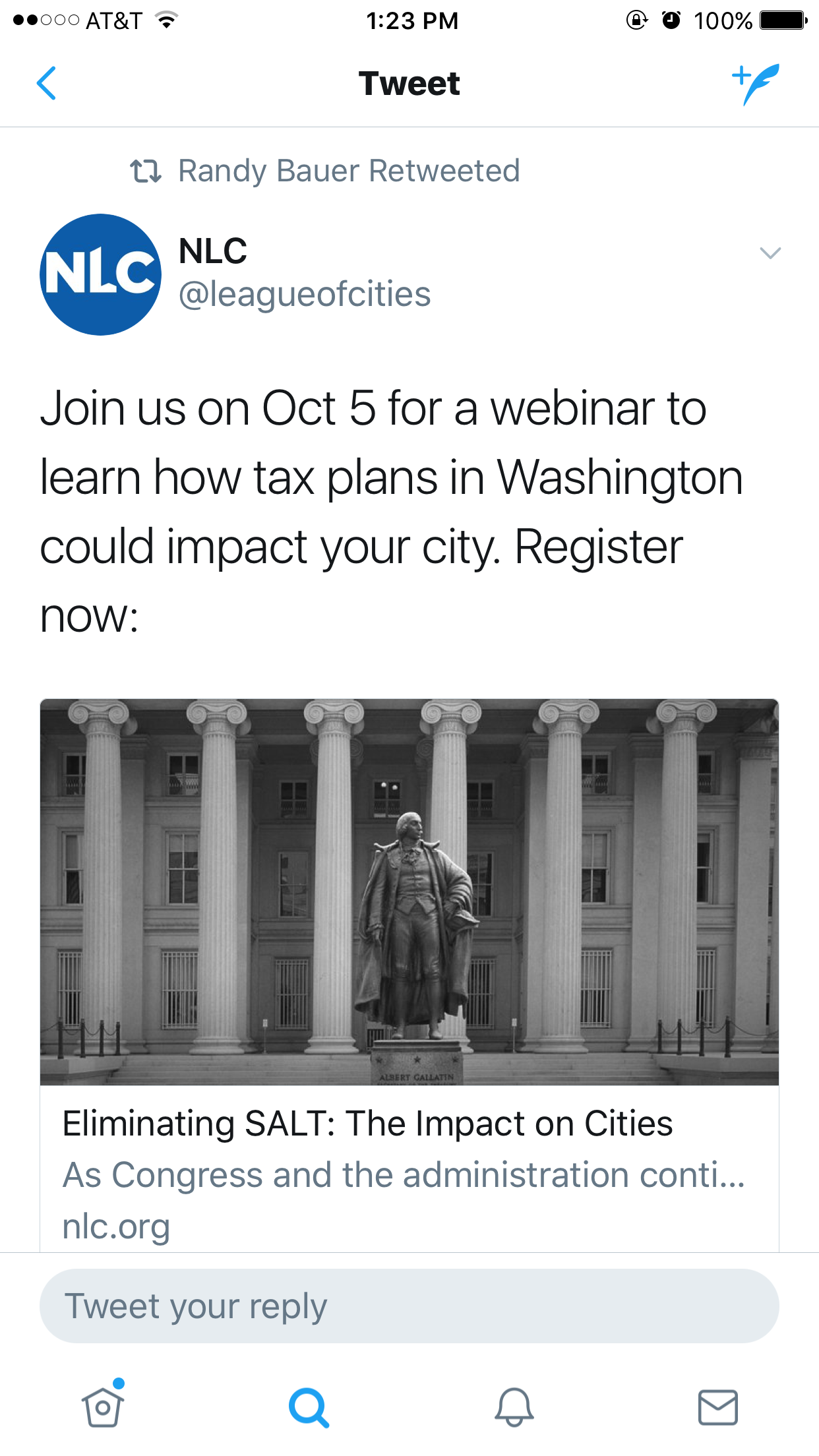 Even though we may have to connect the dots with the previous tweets and retweets of support/endorsement, Mr. Bauer made very clear his thoughts on taxes in a tweet from September 26, 2017. 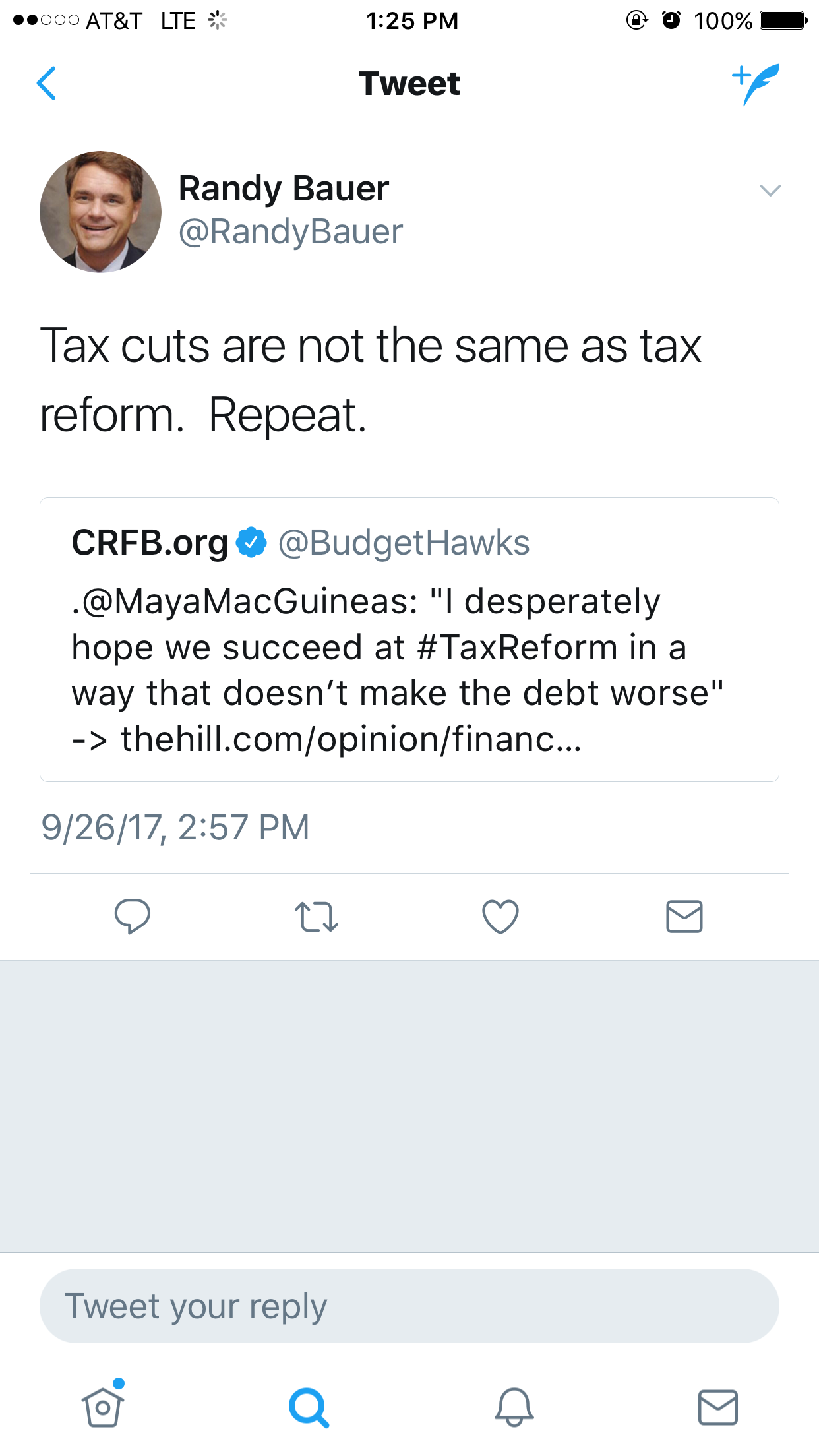 Mr. Bauer states “Tax cuts are not the same as tax reform. Repeat.” This is almost verbatim what Arkansas Speaker of the House Jeremy Gilliam said in the very first meeting of the Tax RELIEF and Reform Task Force. This, again, clearly signaling that the true intent of the task force is not to cut taxes and bring tax relief, but play a shell game of “revenue neutral” reforms where winners and losers are chosen based on their lobbying power and ability to donate to campaigns.

All of Mr. Bauer’s tweets combined paint a clear picture of his political views. It shows Mr. Bauer as a raging liberal who has no interest in reducing the size and scope of government. It is doubtful he will in any meaningful way push for tax cuts and tax relief for an overtaxed Arkansas population.

A search of campaign finance records shows Bauer made ELEVEN donations to Iowa Democrats from 1998 to 2016 and no donations were found for Republicans.

Mr. Randall Bauer’s PowerPoint presentation to the task force was made from the typical Democrat perspective on taxes. Not at all what you would expect to see in a state that voted out Democrats and their policies.

CONSULTANTS CHOSEN TO JUSTIFY THE AGENDA THEY ARE GIVEN

If the client (the task force) tells the consultant they want an Internet Sales Tax, they will find a spiffy way to present that and recommend it as a needed “reform” effort. If those who control the task force support corporate welfare, the consultants will again find a way to sell people on the idea that corporate welfare is good. Hiring a consultant in this scenario is simply a ruse to have the big government cronies point to someone else with a stack of research papers and say “but those certified smart people said it would be good for us” and then push the green button on their voting machines. 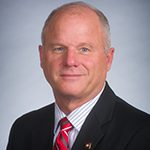 Senator Jim Hendren had this to say about the importance of the consultants for the tax task force: “[W]e are talking about hundreds of millions of dollars in tax cuts and policy and we can’t afford to get it wrong.” This is the same language Senator Hendren used when attacking Conduit for Action for not liking his Medicaid expansion bill in 2015 –”we’ve got to get it right!…” It’s his code for progressive policy implementation.

To get it right, Senator Hendren thinks it is a good idea to have a liberal Democrat recommend tax “reform” for Arkansas.

The people of Arkansas voted in a supermajority of Republicans in the House and Senate, and voted for a Republican Governor. You would think Republicans would want conservatives in charge of much needed tax relief. But Senator Hendren and the task force he created prefer to turn the job of tax policy over to a liberal Democrat.

Paul Harrell recently discussed consultant Randy Bauer on the Paul Harrell Program. You can see that segment below.

Tell us what you think of Senator Jim Hendren’s agenda and the hiring of his liberal consultant with the taxpayers hard earned money.