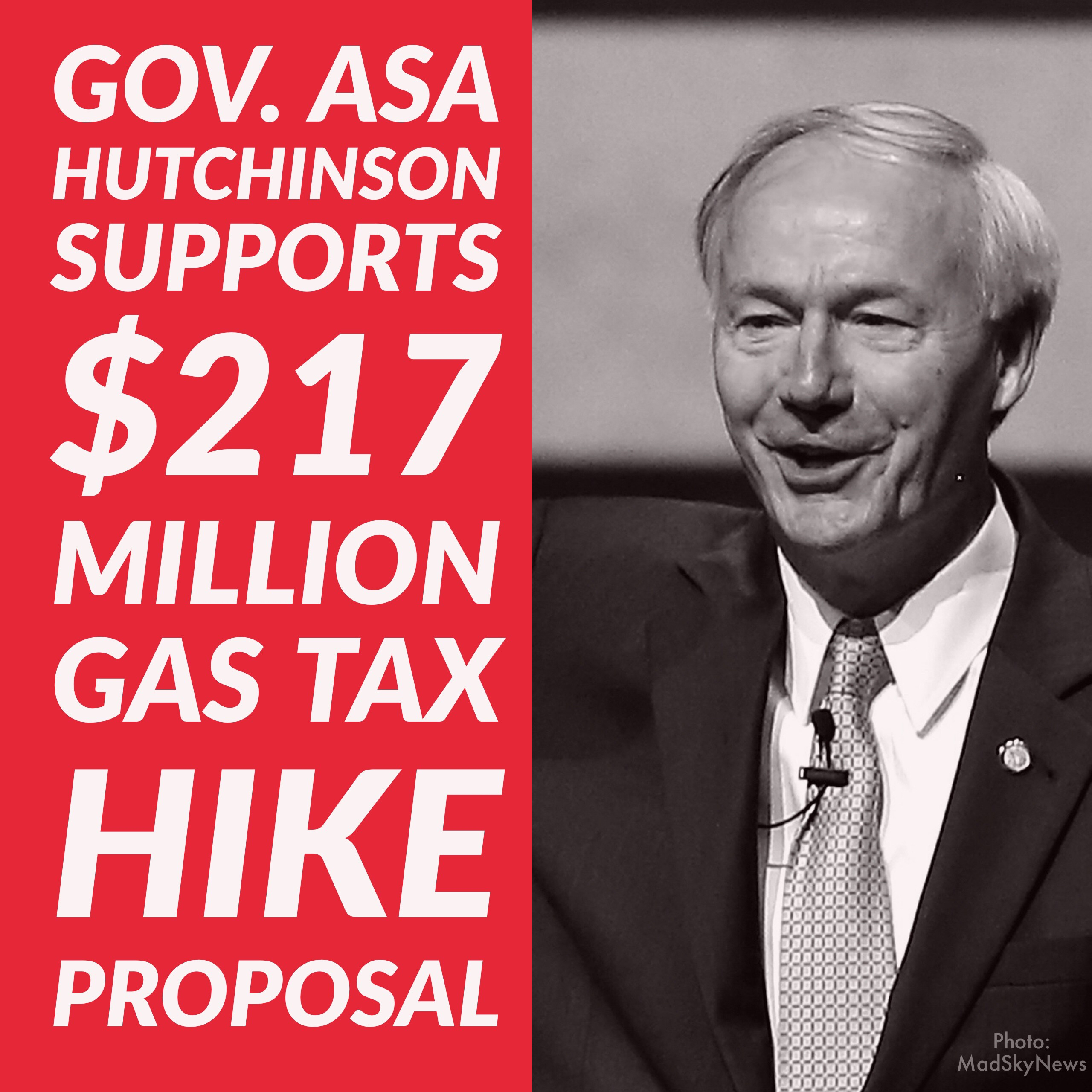 Governor Asa Hutchinson continues to support a Gas Tax Hike proposal that would raise taxes more than $217 million per year on gas and diesel purchases.[1][2] The plan would place a 6.5% sales tax on the wholesale price per gallon of gas and diesel.[3] This translates to a 10 cent per gallon increase for everyday Arkansans at the gas pump.[4] The previous plan was in the form of a ballot initiative that nowhere in the ballot title told people they were voting to increase taxes.

The exact quote from the Governor:

“. . . I would like the same plan that was presented to the General Assembly and narrowly did not get out [of the House] be presented on the ballot to give the voters that opportunity to vote on that plan.”[5]

This “plan” from Representative Dan Douglas (R-Bentonville) was rejected during the recent legislative session. Now, Asa wants an initiated act on the 2018 ballot to see the Gas Tax Hike proposal placed before the voters. There is no known support from the Governor for ballot initiatives to contain government spending.

Some legislators tried to parse words saying they did not support the tax increase but supported people being able to vote on it. However, As Conduit stated during the legislative session, the only way to ensure people do not pay more at the pump is stopping this proposal from appearing on the ballot. If this proposal is on the ballot, millions will be spent on advertising. The ads will focus on fear mongering claims to prevent bridges from collapsing and people dying on roads. Representative Douglas and House Speaker Jeremy Gillam utilized this fear mongering tactic recently at a legislative panel.[6] People will be told to “protect roads” or “save lives” but likely never fully know they are raising taxes at the gas pump.

The proposed ballot title presented during the session nowhere mentions that there will be a tax increase triggered by passing the ballot initiative.[7]

Rep. Douglas’ response to this was that “groups like Americans for Prosperity and Conduit for Action would inform voters this was a tax increase”.[8]

He didn’t mention this would require people’s hard-earned private money be used to overcome a government deception. Representative Douglas did later say he had an amendment to address the misleading ballot title but was never made public.

The funds from the tax increase will be used to fund a bond program. The bonds would be issued to finance highway maintenance and new highway projects, speed up improvement projects already underway, and pay the costs to issue and handle the bonds.

Other proposals to fund roads without raising taxes include:

These ideas to maintain roads without raising taxes have not gained traction to date.