What did the 2019 Arkansas legislature do to fight corruption? Close to zero.

It was as if they think systemic corruption will go away on its own now that the “bad” legislators and lobbyists have been caught.

The title of a recent Democrat-Gazette article reads: “Arkansas Legislators pass half of measures floated on ethics.” Half means three new laws. What you need to know is … the legislation represents a total failure to address the culture of greed and corruption.  The new laws are fluff to be able to say: “We did something.” Worse, one of the three new laws is a Trojan horse passed to enable greedy politicians to get their hands on more money.

CONVICTED OR UNDER INDICTMENT

Currently, under indictment are Senator Jeremy Hutchinson, a nephew of the Governor, for conduct while in office, and Senator Gilbert Baker for corruption after leaving office.

Much of the corruption has involved businesses that are providers of Medicaid services. Some of the cases involved misuse of General Improvement Fund grants.  The indictments against Jeremy Hutchinson include an allegation of bribery by a Medicaid provider and an allegation of taking campaign funds for personal use. 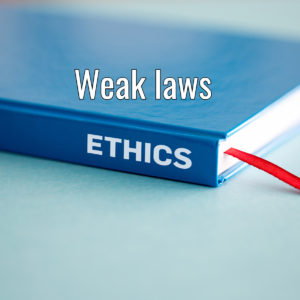 The three new laws can be summed up as two ethics laws that don’t do much, and a campaign finance law that does more harm than good.

Act 341 increases the maximum fine the Arkansas Ethics Commission can impose for an ethics violation from $2,000 to $3,500. Increasing the penalty is a good idea, but this is minor legislation and is an extremely weak response to Arkansas corruption.

Act 879 is a campaign finance law that increases the penalties for taking campaign funds as personal income if the value exceeds certain thresholds. This might have been good legislation if that is all that it did. But legislators decided to include a Trojan horse to allow greedy elected officials to grab surplus campaign funds and divert it to personal use as long as the expenditures are for “officeholder activities.”

In other words, legislators who want to divert campaign funds, like Jeremy Hutchinson is alleged to have done, can now do so if they categorize it as being for some officeholder activity.

To grab the money the legislature had to pass this greedy mess by a 2/3rds vote of each house. Why? Because they were gutting an ethics law passed by the people by an initiated act.

Initially, the legislation included a provision to specifically allow surplus campaign funds to be used to lease a Little Rock apartment, but when Conduit For Action criticized it, the specific language was removed. Yet, under the broad language of the new law it still appears that the cost of an apartment and utilities could be claimed as office expenses.  The exemption for officeholder activities also allows surplus campaign funds to be used for trips and is so broad it is hard to tell what is not allowed.

The state already pays legislators an allowance for lodging when they are in Little Rock. It appears legislators will be able to pocket that money and use surplus campaign funds instead.

Who is it that can fill a candidate’s campaign war chest so he or she will have plenty of surplus to spend? … Special interests who want to get a slice of the government pie.

In 2015, legislators gave up lump sum payments from the state for home office expenses in exchange for a salary increase of 150%. Now they can divert campaign funds for the same purpose.

Of the three new laws, this is the only one to address a circumstance from one of the Arkansas corruption cases. But it goes in the opposite direction and makes it easier for legislators to grab campaign money.

Senate leader, Senator Jim Hendren, was one of the cosponsors of this legislation despite his big speech to open the legislative session saying: “the culture of greed and corruption is over. We will not participate in it. We will not ignore it, and we will not tolerate those who do.” Hendren is also the cousin of Jeremy Hutchinson and is another nephew of Governor Hutchinson. The legislation is too late to stop Jeremy’s indictment for taking campaign funds but Senator Hendren has made it possible for others to grab the money without fear of the enhanced penalties in the legislation.

So much for eliminating the culture of greed.

This legislation appears to be a “look over there” distraction. We are not aware of any instance in which a legislator or constitutional officer has registered to lobby in another state or with the federal government.

The legislation has nothing to do with any of the Arkansas corruption cases.

Last year the Arkansas Senate adopted a rule change to require Senators to make additional financial disclosure. But, there are major deficiencies with the rule.

Compare the feeble new laws and rule to legislation proposed in 2017 that if passed would have directly addressed the corruption. In 2017 one bill would have required Medicaid providers in Arkansas to disclose business relationships with public officials. The other bill would have prohibited legislators who are attorneys or consultants from representing clients before the legislature. Not only were the two ethics law defeated, the Republican sponsor of each  were defeated with the help of … the Governor. No similar bills were filed this year.

Politicians are hoping you will be placated by them passing something… anything that will allow them to carry on in the dark.  Are you placated?