Asa supporters say there was no tax increase on tires.

Debunking #2 of the Jan Morgan information:
Without getting into anything I’d like to point out that the “tire tax” didn’t increase. It was previously anywhere from $2 to $15 a tire. The Governor’s plan capped it at $3 & created accountability for waste tire districts who were previously wasting tax dollars since used tires couldn’t be tracked. Anyone who calls it a tax increase is listening to fake news or willfully ignoring the facts. 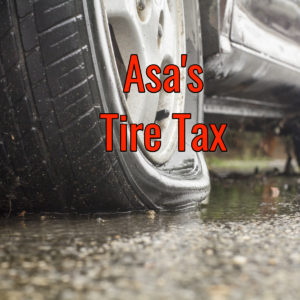 The Asa supporters are WRONG and they could have easily found out the truth about Asa’s tax increase if they weren’t “willfully ignoring the facts” like they accuse others of doing.

Perhaps they think Asa’s own Department of Finance and Administration is “fake news.” You see, DFA also recognizes the tire tax as a tax increase!

Take a look at the legislation, Act 317 of 2017. The tax changes for consumers are found on lines 11-16 of page 11. It is important to know that the words underlined in the bill are being added by the Act.  The words that are stricken through were in the law but are being deleted by the Act.

Here are the changes to the taxes consumers pay:

Remember the tire tax is in addition to the sales tax you pay.

The Department of Finance and Administration says the act increased taxes. DFA’s fiscal impact statement says even after subtracting the revenue loss from eliminating the additional fee on new big truck tires, the overall tax on new tires will bring in an additional $1.5 million.  But wait, the $1.5 million tax increase is just a start. The DFA estimate doesn’t even include the new tax on mounting used tires because DFA didn’t know enough about used tire sales to give an estimate of the increase.

Here is the revenue estimate from DFA.

This bill changes the fee levied on waste tires from $2.00 per automobile tire and $5.00 per truck tire to a $3.00 rim removal fee to be charged for each new tire that replaces a tire removed from a rim and $1.00 for each used tire that replaces the tire removed from the rim. This bill leaves in place the $1.00 fee levied on tires imported into the state of Arkansas. In fiscal year 2016, tire retailers reported 2,387,562 automobile tires, 274,642 truck tires and 22,969 imported tires. Fiscal year 2016 gross waste tire revenue was $5,792,209. Using fiscal year 2016 reported automobile, truck and imported tire numbers, this bill would generate additional revenue of approximately $1,500,000. Revenue would also be impacted by the levy of $1.00 on the replacement of a tire with a used tire. There is no current data for the number of used tires sold in the state of Arkansas in fiscal year 2016. (emphsis added)

You can read the full DFA impact statement using this link.

Ready for some additional reading? We have included a link to Act 317.  When you go to the act search for the dollar sign ($) and see how many fees the Governor added on people transporting and handling used tires.

By the way, the Asa supporters called the failed post “Debunking #2.”  What was “Debunking #1”?  We don’t know, but based on their wild claim here, maybe they were calling 9/11, the holocaust, and the moon landing fake news – and blaming it on Jan Morgan.