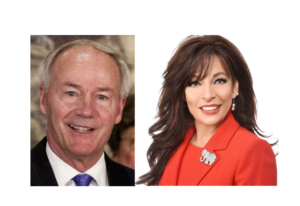 Who would be the more viable Republican candidate for Governor against the Democrat and Libertarian candidates? Governor Asa Hutchinson or Jan Morgan?

Asa supporters will tell you – Jan Morgan can’t win because she is conservative and …. oh my gosh she rides a motorcycle and carries a handgun.

Of course, they don’t want you to think of her as the person who is a successful business owner, a nationally sought-after speaker, an award winning investigative journalist exposing government fraud and waste, was chosen as spokesperson for Citizens for Trump, a person of faith who served two terms on the Executive Board of the Arkansas State Baptist Convention, wants smaller transparent Constitutional government, and actually follows the Republican Platform, unlike Asa. And “yes” she shoots and rides a Harley.

What Asa supporters would like to say but can’t is – Asa has supporters among his CNN and MSNBC crowd and the liberal Democrat-Gazette.  But why would his liberal friends still support him when they could vote for someone who is running as a Democrat?

In a race Asa hoped would be a cake walk, he has already had to spend $1.56 million to try to counter Morgan’s grassroots campaign.[i]

Traditional thinking says a well-funded incumbent Governor will win in November. But that has not always worked out for the incumbent, especially when (like Asa) the governor likes taxes.

Just one tax increase by Governor Bill Clinton on automobile registration in 1979 was enough to make Democrats and independents turn out in 1980 to vote for Republican Frank White. Clinton had the advantage of being the incumbent and being the nominee of the majority party. Yet, anger over the one tax increase overshadowed all of Clinton’s accomplishments in 1979 and 1980. The tax made his accomplishments irrelevant.

Governor Asa Hutchinson, like Clinton in 1980, has a tax problem but Asa’s problem is not just one tax, it is a list of tax increases and broken tax promises.

If Asa were to win the Republican nomination, Democrats would have a field day attacking Asa’s support for taxes and other political baggage. Asa has problems that are not going to enthuse conservative and independent voters.

If Asa were to win the Republican nomination, would a significant number of conservatives stay home or even worse for him, cast a protest vote for the Libertarian candidate?

Is it really possible that people would cross party lines or not vote in November because they are sick of Asa’s tax increases?  Frank White could not have been elected governor in 1980 just on Republican votes – the Republican Party was small back then.  White was elected by Democrats crossing over or not voting.

Traditional thinking says a Republican candidate can get away with anything as long as he or she is Pro-Life. But that is unlikely to apply to this election because Pro-Life legislation is safe in the legislature where there is a Republican supermajority. The Republican legislature can pass anything it wants over the objection of a Democrat Governor. They are veto proof. (Remember even when the Republican legislature had only a one vote majority in 2013 they were able to override Governor Mike Beebe’s (D) vetoes of two Pro-Life Bills.) Pro-Life voters who want to protest against Asa can do so by voting for Libertarian Mark West, who is Pro-Life.

Liberal columnist, John Brummett of the Democrat-Gazette was the first to tell Arkansas that Asa would be better for liberals than a Democrat Governor.  Brummett wrote just before the 2014 election between Asa and Democrat, Mike Ross:

The debate about the private-option form of Medicaid expansion has been a factor in the Asa-advantaged inertia. Ross is fully committed to working as governor to continue the private option. Hutchinson says he’ll do the right thing and that we need, you know, to, uh, study this sonofagun closely. Discerning observers know that Hutchinson is simply trying to finesse the issue to keep his right flank from frothing. Discerning observers know he is going to keep the program after putting some conservative-seeming bow on it.

As I’ve written, because it’s true, Hutchinson could succeed more easily than Ross in getting a decisive few Republicans to vote for the private option. That lets Hutchinson get away with pandering to the right wing while also giving him implied credit for doing the right and pragmatic thing.

Social conservatives are not likely to forget that Asa insisted on the legislature taking back the religious freedom bill and instead give him a watered-down version, or that he did not support a bathroom bill that would keep men from sharing bathrooms with women and girls, or that he opposed legislation to keep state colleges from adopting sanctuary policies for illegal aliens, or that he refused to sign the bill banning Sharia law and instead let it become law without his signature.

Fiscal conservatives are not likely to forget that Asa has expanded state government, expanded crony capitalism by picking winners and losers in business with grants of state money, and is trying to raise several taxes despite Arkansas already being a high tax state.

Would these conservatives hold their noses and vote Asa anyway, or take a walk?

Some conservatives staying away from the polls is not just an Asa problem. It is a problem for all the Republican candidates down the ballot who need the base to turn out.

Asa has been able to avoid a debate with Jan Morgan but if Asa were to win the primary, he would not be able to avoid debates with the Democrat and Libertarian candidates.

The other candidates would have five months to exploit Asa’s record before the November election. The Democrats have already thrown down the gauntlet on taxes – attacking Asa for his reluctance to rule out a grocery tax increase. The general election campaign would be filled with ads highlighting the taxes Asa increased, his broken promise to completely exempt groceries from state sales tax, and how he only lasted a few days in office before breaking his promise not to raise ANY taxes. (Raising the capital gains tax in 2015 was only the beginning of his tax increases.) Candidates would also remind voters Asa still wants them to pay an internet sales tax and higher taxes on gasoline and diesel fuel.

And Clinton only had one tax increase….

Taxes are enough to get any incumbent beat, but Asa would have to be on the defensive on other issues as well.

This list is just the beginning and a five-month campaign is a very long time.

If Asa were to survive the primary, taxes may be a bigger issue this year than it was in 1980. If so, it could be very bad news for Asa and Republicans down the ticket.